The Department of Education has opened a formal investigation into the University of Vermont over allegations several Jewish students have been “subjected to severe and persistent anti-Semitic harassment and discrimination.”

A group of Jewish students who are remaining anonymous due to concerns for their safety say they have been targeted in a range of school settings merely for openly identifying themselves as Jewish. This includes Jewish students being kicked out of a support group for sexual assault victims, “online harassment against Jewish students by a Teaching Assistant,” and attacks on the university’s Hillel building, which supports Jewish life on campus.

The Education Department, which only investigates matters with substantial amounts of evidence, will review these incidents to determine if the University of Vermont “allowed a hostile environment to proliferate on its campus” in violation of Title VI of the 1964 Civil Rights Act, which bans discrimination based on race and religion.

“Jewish students have expressed fear about identifying publicly as Jewish, report hiding their Jewish identity and have considered transferring out of UVM due to the hostile environment toward Jews,” according to the Louis D. Brandeis Center for Human Rights Under Law, a legal advocacy group that filed the complaint with the Department of Education’s Office for Civil Rights.

The University of Vermont investigation is one of several being handled by the Education Department as anti-Semitic incidents proliferate on America’s campuses, driven by an ever-growing cohort of anti-Israel student activists who target Jews. The University of Southern California is also being investigated over allegations it fomented “a hostile environment of anti-Semitism” on its campus that forced a Jewish student government official to resign from her position.

At Vermont, a number of Jewish students approached the Brandeis Center after they faced a series of anti-Semitic incidents. The complaint filed with the Education Department alleges that “an environment of harassment and intimidation has existed at UVM for years, but it intensified in 2021 when a UVM [teaching assistant] repeatedly instigated hate against Jewish students who express support for Zionism, even threatening to lower their grades.” Separately, “two student groups deliberately excluded Jewish students who expressed support for Zionism from membership, and the [UVM] Hillel building was pelted for nearly 40 minutes and vandalized.”

The complaint alleges that school administrators were aware of these incidents, but have “taken no steps to rectify the situation.”

In 2021, an unnamed University of Vermont teaching assistant allegedly targeted several Jewish students who expressed support for the Jewish state. The teaching assistant’s name and identifying information, including her social media posts, are redacted in the public version of the complaint disseminated to reporters. She threatened to lower the students’ grades, cyberbullied the students, and supported vandalism of the Israeli flag, according to the complaint.

“Serotonin rush of bullying Zionists on the public domain,” the teaching assistant tweeted in May 2021, according to a collection of social media posts included in the complaint.

“I get the indelible surge [sic] to cyber bully” Jewish students, the assistant wrote in an April 2021 tweet reacting to a student’s posts from a university Zionist group.

“Is it unethical for me, a TA, to not give zionists credit for participation??? i feel like its good and funny, -5 points for going on birthright in 2018, -10 for posting a pic with a tank in the Golan heights, -2 points just cuz i hate ur vibe in general [sic],” states another April 2021 tweet.

The teaching assistant is also alleged to be behind an effort to exclude pro-Israel and Jewish students from campus groups, including one for sexual assault survivors.

“Considering that this type of anti-Semitism—where Jews are shunned and excluded based on a key component of their Jewish identity—has been ignored by university administrators who have denied its existence for far too long, [the Office for Civil Rights] opening this investigation is significant,” Lewin told the Washington Free Beacon. “The investigation highlights that universities must pay attention when Jewish students are excluded and deprived of opportunities due to their Zionism.”

Universities need to understand that “harassing, marginalizing, demonizing and excluding Jews on the basis of the Zionist component of their Jewish identity is just as unlawful as targeting and discriminating against a Jew for religious observance,” Lewin said. “Universities are now on notice, if Jewish students are denied equal access to educational opportunities based on their identity, and the university chooses to ignore that form of anti-Semitism, the university could find itself the subject of an [Office for Civil Rights] investigation.”

The University of Vermont’s Hillel reported during this time that more than 150 students contacted the organization to express “serious concern” with the anti-Semitic climate on campus. The Hillel posted online that “the onslaught of anti-Semitism” the students “are experiencing online and among their UVM community is unyielding.”

The Hillel itself also was targeted when, in fall of that year, a group of University of Vermont students threw stones at the building. “When one student whose window had been pelted called out asking the perpetrators to stop, one of the students responsible for the rock throwing shouted, ‘Are you Jewish?’” the complaint states.

The Brandeis Center maintains the university is “permitting a hostile environment that marginalizes and excludes Jewish students for whom Zionism is integral to their Jewish identity.” By doing this, the school is “denying equal access to educational opportunities and services to Jewish students on the basis of their shared ancestry and ethnicity,” a violation of the 1964 Civil Rights Act. 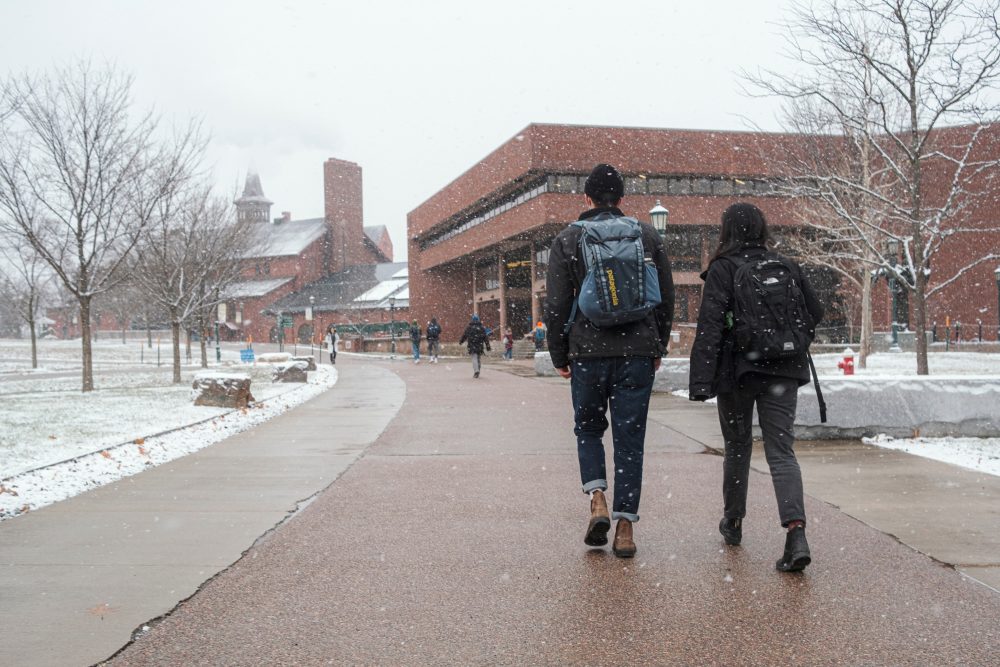