The Colorado Eagles of the American Hockey League (AHL) are the Colorado Avalanche’s main affiliate to feed them talent. The club, located just under an hour north of Denver in Loveland, is coming off a successful season. The team made it to the Pacific Division finals (third round) of the Calder Cup Playoffs, losing the best-of-five series 3-1 to the Stockton Heat.

The Eagles have many names familiar to Avalanche fans, as well as some rising talent who just might get a shot with the NHL club over the course of this season. With that in mind, here’s a closer look at the Eagles.

Founded in 2003 by former Montreal Canadien Ralph Backstrom, the Eagles began in the Central Hockey League (CHL). The team won the CHL championship twice, in 2003 and again in 2006, before leaving the league in 2011 for the ECHL. (The CHL was disbanded in 2014, with the remaining teams being absorbed by the ECHL.)

During their time in the ECHL, the Eagles were second-tier affiliates of the Winnipeg Jets and Calgary Flames before signing with the Avalanche in 2016. The team won the ECHL championship, the Kelly Cup, in back-to-back years in 2017 and 2018.

When the Vegas Golden Knights joined the NHL for the 2017-18 season, the league decided to add one more club to the AHL, the highest level of affiliate hockey for NHL teams. The Golden Knights opted to partner with the Chicago Wolves, leaving room for a new franchise. The Eagles jumped at the chance and left the ECHL to join the AHL for the 2018-19 season.

Both players are with new teams this season—Sherwood is in the Nashville Predators system, and Sikura with the Chicago Blackhawks—making room for younger players to step forward.

The Eagles’ 2022-23 roster includes a number of highly-touted Avalanche prospects, including three first-round draft picks. Martin Kaut, the 16th-overall pick in the 2018 NHL Entry Draft, had 31 points (19 goals, 12 assists) in 46 games in the 2021-22 regular season for the Eagles and five points in nine playoff games. He’s also had a cup of coffee with the Avalanche in each of the last three seasons, notching four points in 20 games. Unless he starts in the season on the Avalanche’s fourth line, Kaut figures to be an important piece of the Eagles’ offense this year.

Shane Bowers, drafted in the first round of the 2017 NHL Entry draft (28th overall), has been a disappointment in his young career. In 117 regular-season games with the Eagles, the 23-year-old native of Halifax, Nova Scotia, has only 45 points (23 goals and 22 assists). The Avalanche re-signed Bowers to a one-year deal ($750,000 at the NHL level, $100,000 at the minor league level), and this is likely a make-or-break campaign for the forward. He will almost certainly start with the Eagles, and he will need to impress early if he has any hope of graduating to the NHL.

Drafted 28th overall in the first round of the 2021 NHL Entry Draft, Oskar Olausson spent last season with two different teams in the Ontario Hockey League: the Barrie Colts and the Oshawa Generals. He was moved to the Eagles for the Calder Cup Playoffs, where he appeared in four games, tallying two assists. The 19-year-old (he will turn 20 in November) also played with Team Sweden in the World Junior Championships, scoring five points in seven games. It’s unlikely Olausson will make the Avalanche squad out of training camp, which means he’ll be one of the most closely watched players on the Eagles.

MacDonald the Centerpiece of Eagles’ Defense

The best player on the Eagles’ defense last season was Jordan Gross. The 27-year-old scored over a point-per-game pace (65 points in 61 games) with an eye-popping 55 assists. Like Sherwood and Sikura, Gross finds himself on a new team this year; he’ll join Sherwood in the Predators’ system.

The most promising young defensive player on the Eagles in 2021-22 was Justin Barron. The 19-year-old did well last season, with 20 points in 43 games. But Barron, the first-round draft pick in 2020 (25th overall), was traded to the Montreal Canadiens for forward Artturi Lehkonen at last year’s trade deadline, leaving a depleted defense heading into this season.

Jacob MacDonald is the most accomplished blueliner on the team, with 25 points in 33 games last season, and has seen extensive time in the NHL, appearing in 41 games for the Avalanche over the last three campaigns.

Annunen and Miner in Goal

The Eagles will begin the season with two goaltenders. Justus Annunen played in 48 games for the team last season and was inconsistent. Annunen was named the AHL’s goaltender of the month for November but posted a pedestrian 3.01 goals-against average (GAA), and .893 save percentage (SV%) over the season. He fared much better in the playoffs with the Eagles, earning a 2.46 GAA and .923 SV%.

Backing up Annunen will be Trent Miner, a 7th-round pick in the 2019 NHL Entry Draft (202nd overall). Miner has spent time in both the Western Hockey League (WHL) with the Vancouver Giants and the AHL with the Eagles.

The Eagles open their season visiting the Texas Stars, the Dallas Stars affiliate, on Oct. 14. The club’s first home game, at the Budweiser Events Center in Loveland, Colorado, is scheduled for Friday, Oct. 21, when they’ll host the Calgary Wranglers. 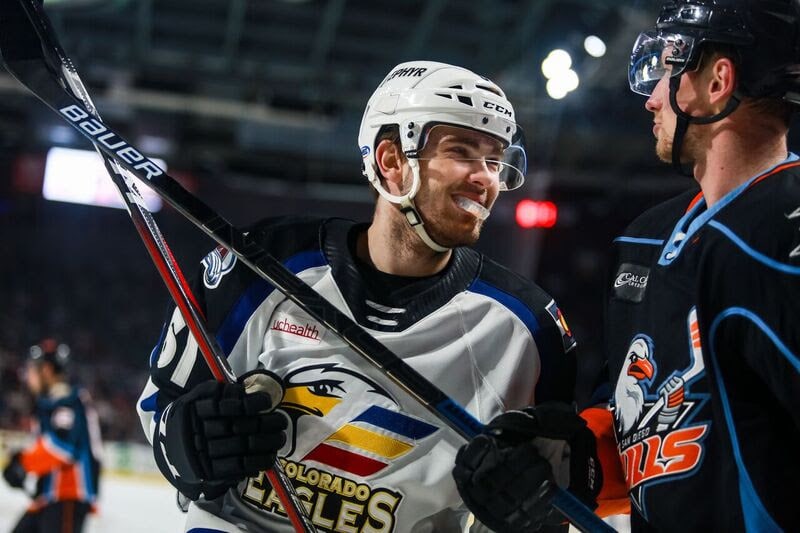 PrevPreviousSpurs: Moura has a “real chance” of leaving
NextHockey Things: What Caught Our Eye (Sept. 12)Next