The Atlanta Braves placed pitcher Jackson Stephens on the 7-day injured list with a concussion on Saturday, but the team is probably just grateful it wasn’t any worse.

Stephens exited the Braves’ game against the St. Louis Cardinals on Friday after taking a line drive to the forehead. Stephens, who had a visible mark from the ball above his brow, managed to stay on his feet and exited the game under his own power, but any ball to the head is going to be scary for a pitcher.

The line drive was measured by Statcast at 90.4 mph off the bat of Cardinals third baseman Brendan Donovan. You can see a replay here, but it’s not a pleasant sight:

The Braves replaced Stephens on the mound with Tyler Matzek, who got the final two outs to seal the 11-4 win.

Braves manager Brian Snitker told reporters after the game Stephens had been sent to the hospital, per the Associated Press:

“He’s aware and everything but he’s going to have to go to the hospital and get some tests,” Braves manager Brian Snitker said after his team’s 11-4 victory. “It’s always scary when you see somebody get hit in the head, the face. That’s probably the most sickening thing you can witness in a game.”

Given that some pitchers have landed in intensive care wards and required brain surgery, it’s a relief that Stephens was apparently well enough to visit the Braves’ clubhouse on Saturday. He had a big bruise, per The Athletic’s David O’Brien, but was apparently without headaches and in good spirits otherwise.

Stephens is in his first season with the Braves after signing a minor league deal with the team last offseason. He holds a 3.89 ERA, a 1.386 WHIP and 43 strikeouts in 44 innings (32 appearances) this season. 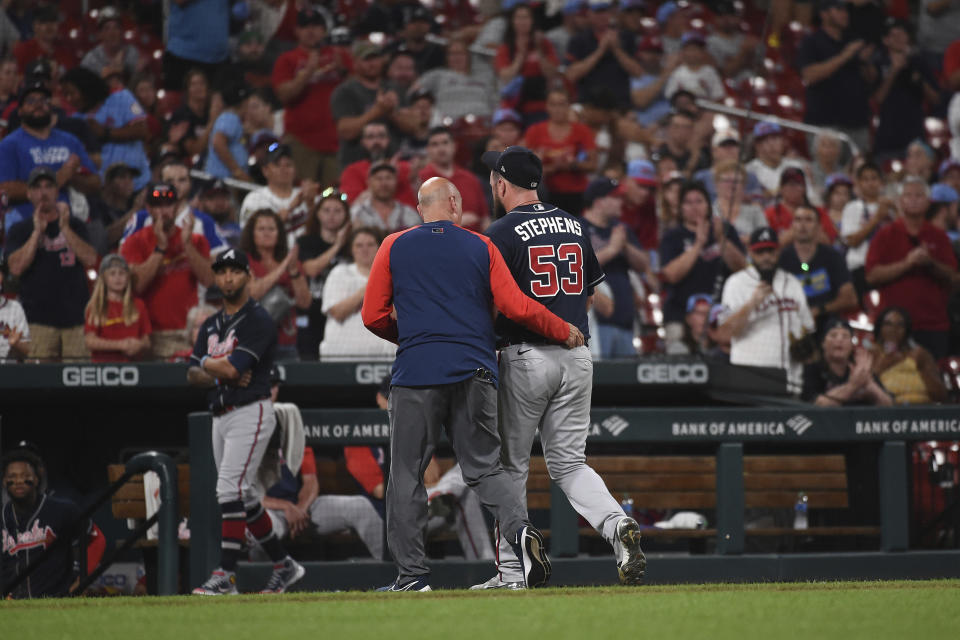 PrevPreviousABC Set to Broadcast NCAA Women’s Basketball Championship Game
NextRedding course is in escrow. What does that mean?Next