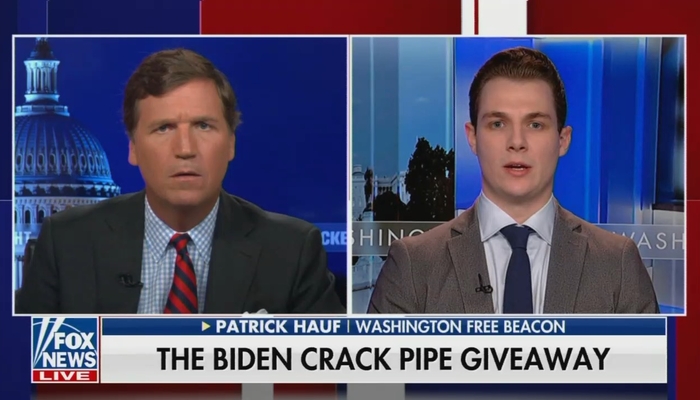 Early Thursday morning, the Washington Free Beacon’s Patrick Hauf published a story proving once and for all that despite their claims to the contrary, the Biden administration is indeed providing crack pipes in their safe-smoking kits which are being distributed throughout the country.

Yet, despite irrefutable proof (the Free Beacon provides photos), all three evening news broadcasts ignored the administration being caught in yet another bald faced lie over providing crack pipes in safe-smoking kits. Instead of covering this story, ABC’s World News Tonight, CBS Evening News, and NBC Nightly News decided to cover for the Biden administration and focus on local weather reports, and local wildfires.

As originally reported by the Washington Free Beacon, “the $30 million grant program…will provide funds to nonprofits and local governments to help make drug use safer for addicts. Included in the grant, which is overseen by the Department of Health and Human Services, are funds for ‘smoking kits/supplies.’”

When Jen Psaki was asked in February if the Free Beacon report was true, she denied it and took a swipe at Hauf claiming “[t]hey were never a part of the kit; it was inaccurate reporting and we wanted to put out information to make that clear.” Yet, even after the Free Beacon posted evidence of the federal government providing crack pipes, Psaki, when asked during Thursday’s press conference, called the story “a bit of a conspiracy theory” and “not accurate.”

Predictably, the leftist media followed suit and worked to discredit the story, label it false, or ignore it all together.

Yet in Thursday’s report the Free Beacon wrote:

The findings are the result of Washington Free Beacon visits to five harm-reduction organizations and calls to over two dozen more In fact, every organization we visited—facilities in Boston, New York City, Washington, D.C., Baltimore, and Richmond, Va.—included crack pipes in the kits.

It must be good to be a Democrat. Even when you lie and get caught, the media covers for you. Will the so-called fact checkers who all labeled the original Free Beacon story “false” retract their ratings and issue an apology? Don’t hold your breath.

This outrageous bias by omission by the three broadcast networks was made possible by WeatherTech on ABC, Capital One on CBS, and Geico on NBC. Their information is linked.