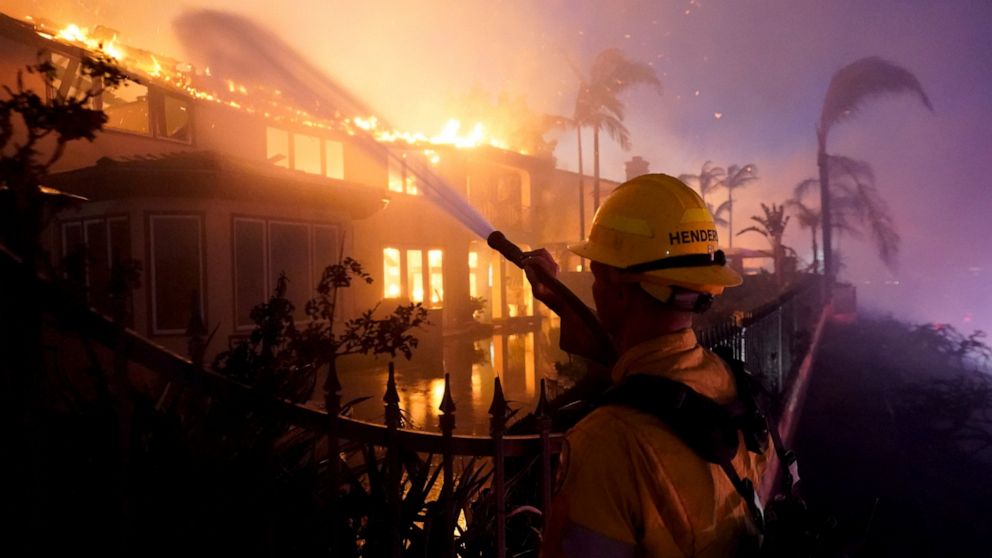 Firefighting managers in northern New Mexico say the flames of the largest wildfire burning in the U.S. have become unstoppable as they advance and burn trees sucked dry of moisture over decades of drought

The flames of a northern New Mexico wildfire have become unstoppable as the largest blaze in the U.S. burns trees sucked dry of moisture over decades of drought amid a forecast Thursday of more winds expected to fan the blaze, according to wildfire fighting managers.

Meanwhile, winds in Southern California sent embers flying in the coastal community of Laguna Niguel on Wednesday. More than 20 homes were destroyed, many of them multimillion-dollar mansions. No injuries were reported.

The California fire was much smaller than the New Mexico blaze that has burned at least 170 homes, but Brian Fennessy, chief of the Orange County Fire Authority, said drought and climate change have combined to make fires that were once easy to contain extremely dangerous for people and property

From New Mexico to Colorado and parts of the Midwest, forecasters on Thursday issued red flag warnings of extreme wildfire danger because of low humidity levels, erratic winds and warm temperatures. The same combination of weather conditions have contributed over the last month to much worse than normal spring wildfires in the U.S.

In New Mexico, the fastest-moving flames in the southern foothills of the Rocky Mountains were headed northeast and away from the area’s biggest population center of Taos, a popular tourist destination 40 miles (64 kilometers) south of the state line with Colorado.

The winds have made it difficult for aircraft to fly to help firefighters on the ground, but some planes managed to drop retardant on the blaze Wednesday despite winds gusting in some areas above 45 mph (72 kph).

Some evacuation orders were relaxed along the southern flank of the fire near the town of Las Vegas, New Mexico.

Additional crews were on order to join the more than 1,800 personnel fighting the New Mexico fire, and forecasters said weather conditions should improve on Friday.

The fire already has burned through a forested landscape held sacred by its rural residents, many losing homes that have been in their families for generations. Some evacuated residents who were allowed to return home Tuesday and Wednesday found only charred rubble. Others were more fortunate as the flames skirted their homes.

Officials have predicted that the number of homes burned by the fire will rise dramatically when it’s safe for officials to do assessments of areas that are still smoldering.

Crews also were battling a smaller New Mexico fire near Los Alamos National Laboratory, a key government facility for nuclear research that has been tapped to ramp up production of plutonium components for the U.S. nuclear arsenal.

Most employees started working remotely this week as the lab and people living in the town of Los Alamos prepared for possible evacuations.