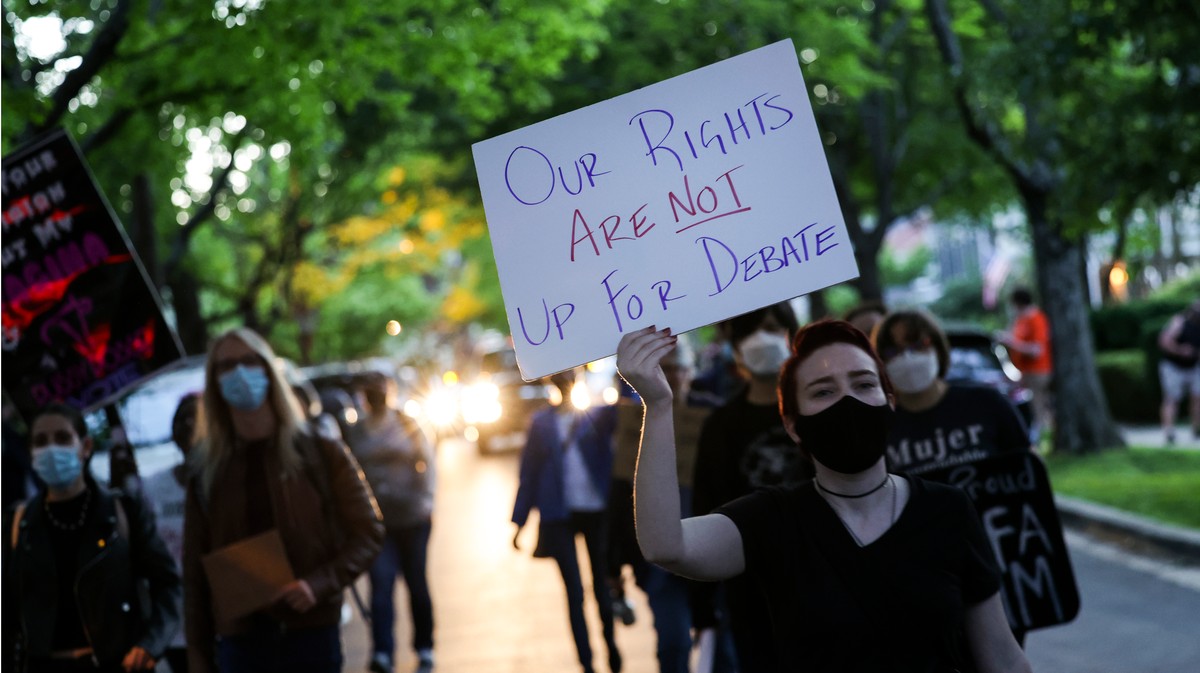 At least nine Americans should still be able to enjoy a right to privacy, according to GOP Govs. Larry Hogan and Glenn Youngkin.

The Republican governors of Maryland and Virginia sent a letter to the U.S. Department of Justice asking them to beef up security at the homes of Supreme Court Justices, after abortion rights activists staged protests at their D.C.-area homes.

“While protesting a final opinion from the Supreme Court is commonplace when done on the steps of the Court or in the public square, the circumstances of the current picketing at the Justices’ private homes in residential neighborhoods are markedly different,” the governors wrote to Attorney General Merrick Garland.

The governors are asking Garland and the DOJ to enforce a part of federal law that says that picketers who demonstrate near court buildings or judges’ homes “with the intent of influencing” them can be fined and imprisoned up to one year.

The steps of the Supreme Court, it should be noted, are currently blocked off by an eight-foot high “unscalable” fence, erected last week in the wake of the leak of a draft opinion, written by Associate Justice Samuel Alito, that calls for the overturn of Roe v. Wade and Planned Parenthood v. Casey.

The Supreme Court, including Alito, ruled unanimously in 2014 that a Massachusetts law establishing 35-feet “buffer zones” outside of abortion clinics, in order to prevent the harassment of clinic patients and employees, was unconstitutional because it violated the protesters’ First Amendment rights.

Peaceful protests against the possible end to the nationwide right to abortion have taken place at the homes of Alito, Justice Brett Kavanaugh, and Chief Justice John Roberts since the leak of Alito’s draft opinion last week asserting that both the Roe and Casey decisions should be overruled as “no such right is implicitly protected by any constitutional provision.”

White House Press Secretary Jen Psaki denounced the protests in a tweet Monday, on behalf of President Joe Biden. “[Biden] strongly believes in the Constitutional right to protest. But that should never include violence, threats, or vandalism. Judges perform an incredibly important function in our society, and they must be able to do their jobs without concern for their personal safety.”

Psaki later clarified during a Monday press briefing that “we have not seen violence or vandalism against Supreme Court justices.”

Still, Republicans have been apoplectic over the protests against Supreme Court Justices who are soon to vote on whether or not to eliminate the right to an abortion, which Roe enshrined as a civil right nearly 50 years ago. “Can you imagine the media outrage if protestors were outside Justice Sotomayor’s house?” Rep. Jim Jordan tweeted Wednesday.

On Monday, Sen. Ted Cruz implied the protests at the Justices’ homes were worse than the Jan. 6 Capitol riot during an appearance on Fox News. Cruz, who helped lead the effort to overturn the election, referred to the rioters as “terrorists” earlier this year, before groveling to Tucker Carlson.

“You had tens of thousands of people peacefully protesting, and yet the corporate media and Democrats slander them with the made-up term ‘insurrectionist,’” Cruz said in an appearance on Sean Hannity’s Monday night show.

“And yet in this instance, they are not willing to call off their goons even now, even now, as this has the potential to escalate and escalate further.” ‘

And right-wing Arkansas Sen. Tom Cotton wrote a letter to Garland Tuesday, citing the same federal law that Hogan and Youngkin did, demanding to know why the “lawbreakers” peacefully protesting weren’t arrested – and threatening impeachment proceedings against Garland next year.

Even some Republicans said that would go too far, including Wyoming Sen. Cynthia Lummis, who told NBC News the protests were “probably a legitimate expression of free speech.”

Despite Hogan and Youngkin’s letter, protests against the conservative Justices continued Wednesday, as several demonstrators dressed in costumes from The Handmaid’s Tale protested outside of Justice Amy Coney Barrett’s home in northern Virginia.