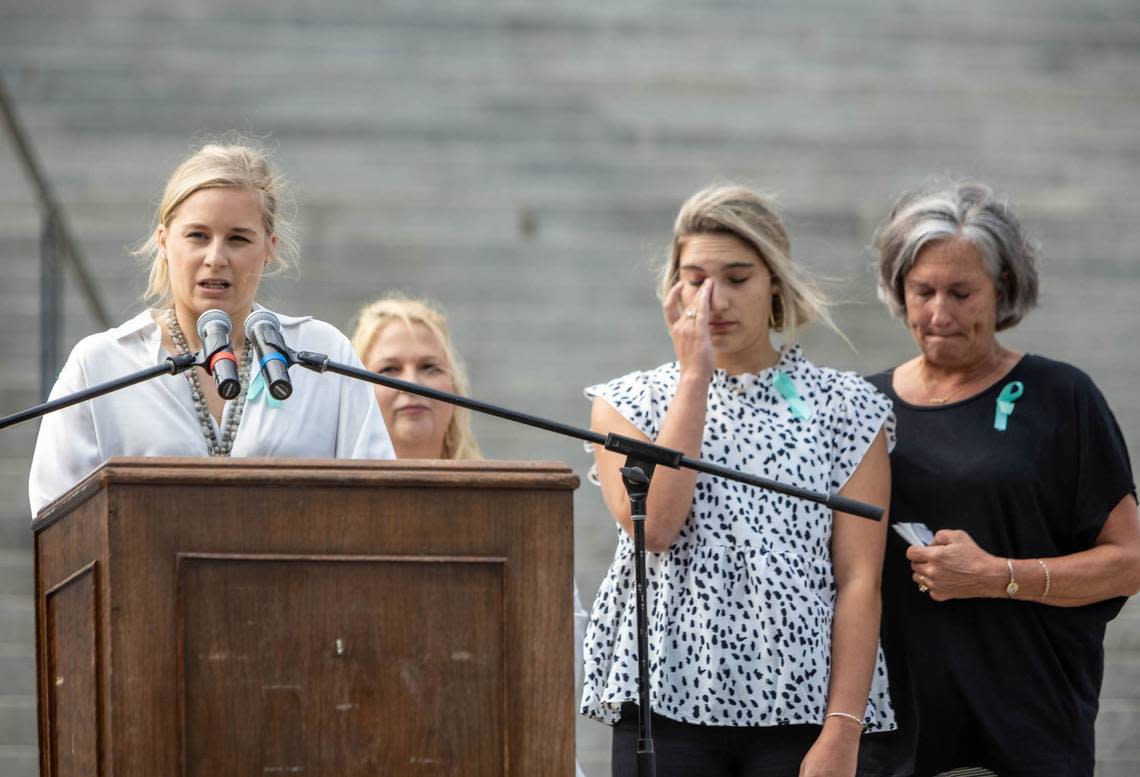 Chloe Bess has been reliving her sexual assault for years, recounting details and defending her claim countless times to law enforcement, lawyers and judges who she says uphold a system that re-traumatizes victims.

“The most traumatic night of my life has been drug out for three years,” she said Thursday morning at a rally outside the South Carolina State House to raise awareness for victims’ rights. “No one can change what happened, but they were supposed to help me.”

Bess was one of three girls to accuse 19-year-old Bowen Turner of rape between 2018 and 2019. In April, Turner pleaded guilty to first-degree assault and battery in Bess’s case. It was a lesser conviction than the first-degree criminal sexual conduct charge he’d been charged with by law enforcement.

The lesser conviction came with a sentence of five years probation and no placement on the state’s sex offender registry. When sentencing Turner, the judge warned that if he violated his parole, he could be placed on that registry.

Victims’ advocates say Turner’s case is an example of a system that favors defendants over victims, particularly victims of sexual violence. Victims’ advocates, along with Bess, her family and relatives of Turner’s other accusers hope state lawmakers will take notice and pass laws to better defend victims.

“We can’t keep allowing victims to be treated this way. All it’s doing is showing the perpetrator they can get away with it time after time, and it’s evident particularly in this case,” Bess said Thursday.

While standing on the State House steps, Bess referenced how she was treated by Turner’s attorney, state Sen. Brad Hutto, D-Orangeburg, as an example of how state lawmakers have responded to victims’ rights advocates.

The rally, hosted by the South Carolina Victim Assistance Network and the state’s coalition against domestic violence and sexual assault, came on the heels of Turner’s latest arrest.

Earlier this month, Turner was arrested and charged with disorderly conduct in Orangeburg, a month into his five-year probationary period.

The latest arrest prompted the organizations to hold an impromptu rally “to focus attention and motivate action in regards to how sexual assault and violent crimes are handled by the South Carolina criminal justice system.”

“Pointing out where things need to change is not a bad thing; it’s essential in a democracy,” said Sarah Ford, legal director for the victim’s assistance network. “And that’s why we’re here today in front of the State House to encourage our legislators to hear from people who have been victims and who have also been revictimized by our system.”

The groups want to see a list of changes in the Palmetto State, including a system to track when perpetrators of violent crimes are granted plea deals for lesser convictions.

Among those in attendance Thursday was Brette Tabatabai, whose sister, Dallas Stoller, died by suicide in 2021 after accusing Turner of sexually assaulting her in 2018. He was out on bond for that charge when he assaulted Bess.

“For three years after her attack, Dallas suffered severe mental anguish. Not only from the trauma of her assault, but trauma (from) being relentlessly bullied by peers and adults in the community,” Tabatabai said.

Five months after Dallas died, her family was told via Zoom that the state was dropping her case. Dallas had “plenty of evidence” to pursue her case, Tabatabai said. She had offered sworn statements and had a witness.

“So what do we do when the oppressors are the very leaders who are supposed to protect these girls and these women?” Tabatabai asked the crowd Thursday. “We fight. We stand for the silenced. We make noise, and we don’t stop until we’re heard. We vote the good ol’ boys out.”

After the rally, the few dozen people in attendance were encouraged to meet advocates in the State House lobby to ask lawmakers for stricter punishments for perpetrators of violent crimes and better safeguards for their victims.