Men’s World Hockey Championship: Player to Watch on All 16 Teams 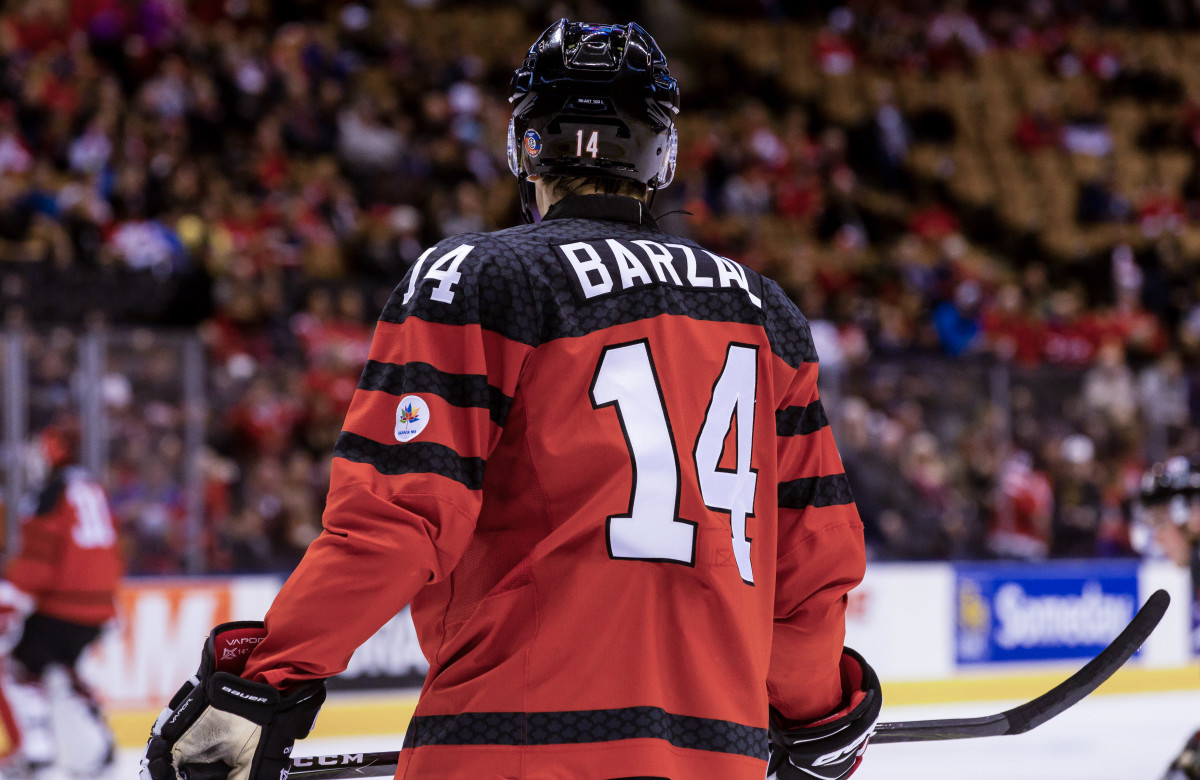 The World Hockey Championship is set to begin on Friday in Finland, pitting 16 of the top hockey nations – minus Russia and Belarus – battle in the annual Spring brawl. In Europe, it’s a big deal to win this. You’ve beaten the largest field of international teams available. For North America, it’s typically not considered a huge event in the midst of the Stanley Cup playoffs, but even without a top-tier lineup, Canada managed to win it all last year.

The World Championship is always wide open. You’ll get upsets – Latvia beating Canada last year, for example – all the time because of how random some of the lineups can be. You’ll get rivalries, great stories and, in many cases, a fitting end to a long career. This tournament means a lot for everyone that takes part.

Let’s break down a player on each team to watch as the three-week affair kicks off on May 13:

Mathew Barzal, C
The New York Islanders had a season to forget, but Barzal is looking to make the most of it. Despite missing the playoffs, Barzal had 59 points in 73 games and likely would have finished closer to 65 had he played the whole season. This will be Barzal’s second World Championship appearance after an impressive seven-point run in 2018 after his NHL rookie season, and he’s no stranger to having big showings on the international stage.

Nikolaj Ehlers, LW
It’s always nice seeing players representing smaller countries at an event like this. Ehlers was a big reason why Denmark made the Beijing Olympics, but the NHL pulling participation prevented him from taking part. Ehlers hasn’t played in this tournament since 2017, but he had four assists in seven games and has played for Denmark every season he has missed the NHL playoffs in. That’s dedication, and he’ll be a workhorse after two incredible seasons back in Manitoba.

Alexandre Texier, C
Being the lone NHLer in a year where your country didn’t even properly qualify will make you easily stand out, but Texier’s inclusion means more than usual. He was having a strong campaign with Columbus with 20 points in 36 games before an injury took him out of action in late January. Then, in mid-March, Texier was granted a leave of absence and didn’t return for the rest of the season. Texier was able to spend time with family, and now he’ll test his game-playing shape at the World Championship after some earlier exhibition games. Texier is always important at an event like this for France, and the spotlight will be all his in his first World Championship since 2019.

Moritz Seider, D
Is Seider the favorite to win the Calder Trophy? Absolutely, and now he’s set to make his men’s national team return while flying high with momentum. Seider was named top defenseman at the tournament last year and also showed some skill with the group at the 2019 tournament, too. Every time he puts on the German national team, Seider is noticeable, and there’s no question he’ll be a big part of Germany’s attempt to make the playoff round.

Andreas Bernard, G
Last year, with Bernard not playing, the Italians relied on Justin Fazio to give them a fighting chance. This year, they’re back to their No. 1, and he’s going to be a busy beaver. Bernard is Italy’s long-time No. 1 goaltender and was a big part on the team’s effort to make the top event multiple times. The 31-year-old be vital in games against France and Kazakhstan as the team looks to avoid relegation and stay up for the fourth tournament in a row, something they haven’t done since hosting the 2006 Olympics.

Darren Dietz, D
Kazakhstan’s roster doesn’t have a ton of NHL experience, but Canadian-born Darren Dietz is definitely the guy to lean on for Kazakhstan. Back in 2018-19, Dietz, who played 13 games with Montreal in 2015-16, finished the KHL season with 53 points in 62 games to win the top defenseman award, only to grab the same recognition at the Division IA World Championship that year. The 2022 Gargarin Cup champion has lost a bit of his offensive force in recent years, but he’s still playing good hockey.

Juraj Slafkovsky, LW
After taking the Olympics by storm with seven goals in seven games en route to a silver, Slafkovsky is back and ready to show why he’s capable of going No. 2 in the NHL draft. Slafkovsky spent the year playing against men in the Finnish league and already played in the World Championship last year. But don’t expect him to play limited minutes again – Slovakia is going to put a ton of emphasis on getting him the puck.

Nico Hischier, C
Hischier had a consistent tournament for Switzerland, but it felt like there was still something missing from his game. This year, Hischier is coming off of a career-high 60 points and had two points in exhibition games leading up to the World Championship in a 3-2 overtime loss to Sweden last week. This will be Hischier’s third World Championship, but he’s still seeking his first playoff victory with his country.

Marco Kasper, C
A projected first-round pick for the 2022 NHL draft, this is a fantastic opportunity for Kasper to earn a few more spots in the draft rankings. He’s looked fantastic with the men’s national team already and spent most of the year playing against men in the SHL with Rogle, leading all U-18 players with 11 points. A speedy, hard-working forward, Kasper can play throughout the lineup, and don’t expect the Austrians to shelter him too much with no NHLers to choose from.

Jakub Vrána, LW
It’s a shame we didn’t get to see more than the 26 games Vrána played this season, because he sure looked impressive. Add in two goals in recent exhibition games with Czechia and Vrána is coming in with lots of momentum. Vrána had four points a year ago and five back in 2019, and the goal-scoring winger will be counted on to get disks past goalies in a competitive Group B.

Harri Säteri, G
What a year it was for Säteri. He led Finland to a perfect run at the Olympics, posting some of the best numbers we’ve seen from a goalie in men’s Olympic hockey history. He then capped off the year with a six-game run with the Coyotes, including a huge comeback effort to beat Nashville in the final game of the season. Säteri doesn’t have a contract for next season yet, so a strong showing for a medal contender with heavy Olympic-winning ties could help the 32-year-old solidify another run in the NHL.

Ben Bowns, G
With no Liam Kirk, this might be Team GB’s final chance at playing in the top division for a while. That is, of course, unless Ben Bowns puts on yet another incredible in the British net. Bowns was fantastic last year, highlighted by a 52-save effort against Sweden and was a big reason why they beat Belarus. He’ll be busy in Group B.

Elvis Merzlikins, G
This is somewhat of a feel-good story. Every time Merzlikins plays for Latvia, he gives them a fighting chance. But Merzlikins made headlines by announcing he’ll wear No. 80 in honor of his friend and fallen teammate Matīss Kivlenieks, who was tragically killed last summer following a firework accident. Merzlikins will be playing with a heavy heart a year after Kivlenieks helped Latvia beat Canada in a historic victory last year.

Ken Andre Olimb, C
Norway can always count on Olimb to deliver when the team needs scoring. Olimb has played in 69 World Championship games over 11 years with 35 points, and has even skated in two Olympic tournaments, too. Ken Andre’s brother, Mats, is the all-time leading Norweigan scorer with 67 points in the tournament, with Ken Andre sitting eighth. Together, both will look to lead the team into the playoff run, and Ken Andre will look to build off of his strong Olympic qualification tournament.

Oliver Ekman Larsson, D
Rasmus Dahlin is the definite star on Sweden’s blueline, but Ekman Larsson’s situation is a bit more interesting. OEL’s name has appeared in trade rumors, and the Vancouver defenseman could use this event as a chance to further spice up his trade value. Once a top defenseman in the NHL, Ekman Larsson has struggled in recent years, but he always amps things up in the World Championship. His last appearance back in 2019 saw him record eight points in eight games to give him 39 in 50 outings. Sweden has a strong defensive unit that can make up for OEL’s mistakes in his own zone – let’s see how that works out.

Seth Jones, D
Fresh off of a 51-point season with Chicago, Jones makes his return for the first time since 2015. In 2014, though, Jones, an NHL rookie, won the top defenseman award with 11 points, only to up it with a bronze medal the year after. A four-time NHL all-star, Jones will lead a defense core that has five defenders aged 24 or under, including Caleb Jones, Seth’s brother. Jones, the team’s captain, will serve as a mentor for a team that has speed and potential, but a lot less experience than most other teams. That type of unwilted talent could actually be what makes this team a true underdog contender.