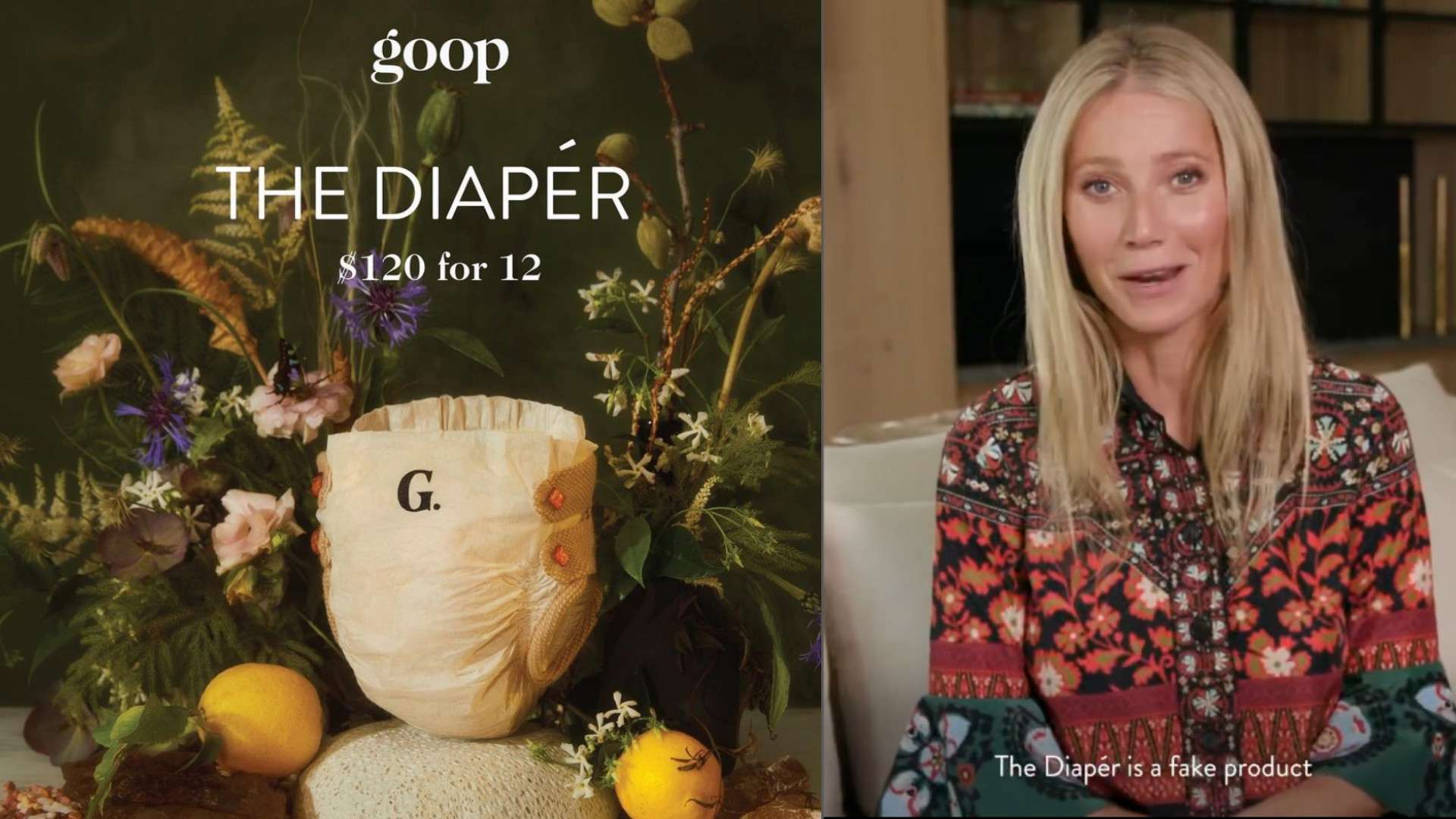 An infuriating ad for luxury disposable diapers is actually a campaign against diaper taxes.

The ad/anti-tax protest comes from goop, a lifestyle brand—founded and run by actress Gwyneth Paltrow—known for its often ridiculous (and pricey) wellness products and woo-woo sensibility.

Goop’s “The Diapér” was advertised as a “disposable diaper lined with virgin alpaca wool and fastened with amber gemstones, known for their ancient emotional-cleansing properties.” The Diapér is “infused with a scent of jasmine and bergamot for a revitalized baby,” goop posted yesterday on Instagram. “Dropping tomorrow at 11a.m. EST at $120 for a pack of 12.”

Many weren’t sure what was going on. Surely, not even the rich and famous could justify such a ridiculously decadent, wasteful, and pricey product to catch baby poop? Then again, this is goop, which sells things like Yoni eggs—meant to be inserted in the vagina to “harness the power of energy work, crystal healing, and a Kegel-like physical practice.”

It wasn’t long before Vice unveiled the truth: The Diapér is not a real product (thank goodness). Rather, it’s meant to raise awareness about sales taxes on diapers.

In more than half of U.S. states, diapers are considered a nonessential item for sales tax purposes. This means they’re subject to sales taxes that items considered necessities are not.

According to the National Diaper Bank Network, 35 states charge sales tax on diapers. “This tax can range from 1.5% in Virginia to 7% in Indiana, Mississippi, and Tennessee” and “in many states, cities and counties can add additional tax,” it says.

Goop’s ad for wool-and-gemstone disposable diapers was created to highlight the absurdity of considering diapers a nonessential product—in essence, a luxury. It’s part of an awareness campaign goop is undertaking with the nonprofit Baby2Baby.

The ad garnered “a lot of outrage,” said Paltrow in a video posted to Instagram by goop today. “Good. It was designed to piss us off. Because if treating diapers like a luxury makes you mad, so should taxing them like a luxury.”

“Despite the absolute necessity of diapers, in 33 states they aren’t treated like an essential item. They’re taxed like a luxury good,” Paltrow continued, noting that a lot of U.S. families struggle to afford diapers. “While eliminating the diaper tax is not a complete solution, it could allow many families to pay for another month’s supply.”

Goop’s fake Diapérs were priced at $120 “because that is what the diaper tax could cost families annually,” goop posted alongside the Paltrow video.

Vice scoffed at the whole thing, calling it a “poorly-timed PR stunt” that fails on the grounds that “any absurd Goop product could very well be real” and that it comes “in the wake of the news that Roe v. Wade will likely be overturned” and as the U.S. is experiencing a baby formula shortage.

But just because some issues related to parenting may be more newsworthy or pressing doesn’t mean it’s a bad time to raise awareness about this issue. There will always be more pressing or momentous issues—which is why it takes a celebrity and a flashy stunt to draw attention to an issue like this. And the fact that goop seemed willing to satirize its own hippie-luxury aesthetic to do so is actually to the company’s credit.

Taxing diapers may not be a major issue. But the extra taxes do add up, especially for families that need a lot of diapers. And besides, anything that lets Americans pay a little less in taxes to the government is a good thing.