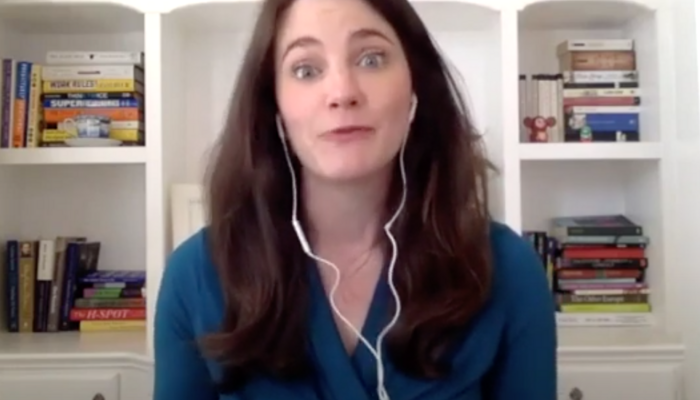 Disinformation Governance Board leader Nina Jankowicz has a history of deriding the very concept of free speech when speaking with political leaders.

Jankowicz called to curtail free speech in the name of protecting women from criticism, according to a transcript of a meeting in the UK to consider the Draft Online Safety Bill. Jankowicz told the Joint Committee on the Draft Online Safety Bill in the United Kingdom in September 2021. Jankowicz suggested that it would be a “useful starting point” for Ofcom (the UK Office of Communications) to punish Big Tech platforms with “fines” for not censoring users enough. She also mocked the very idea of alternate platforms protecting online speech as mere “freedom of expression and fairy dust.” The chair of the hearing, UK Member of Parliament Damian Collins, aligned with Jankowicz in calling for a regulatory crackdown on free speech online. He suggested that in the context of these regulations: “freedom of speech would appear to be less about speaking truth to power than one person’s perceived right to abuse another.”

Jankowicz absurdly argued that being a woman online is “an inherently dangerous act.” She added: ”You are opening yourself up to criticism from every angle. I would like to say that this online misogyny is being hastened by social media.”  She even went so far as blaming foreign regimes for encouraging people to criticize women in order to subvert “democracy”:

“There is also a national security concern. In the report, we do a deep dive on three journalists who have been targeted by Russia, China and Iran, which recognise this endemic misogyny in our societies and use it to undermine our democratic society. It is not just a democratic concern; it is a national security concern, which should make it of interest to everybody in government. It is not just about hurt feelings. It really affects the way our countries operate.”

Jankowicz also appeared to praise the idea of shadowbanning or deboosting, phrasing it as “demoting content” and phrasing the tactic as “You can shout into the black void, but you don’t get a huge audience to do that.”

Jankowicz also condemned “dogpile” tactics, apparently referring to when a user criticizes a liberal for something, causing other users to follow suit, as if that were not the nature of social media itself. “One individual will post a piece of content, whether on Twitter or on Facebook, with a large following, and in that original piece of content there is nothing that violates terms of service, but that is the dog whistle that initiatives [sic] the dogpile and then all the vitrioling content comes from there,” she said. “That initial piece of content did not trip the tripwire, but these folks who are initiating the dogpile we believe should and can be punished, because they are unleashing what is much worse.”

Conservatives are under attack. Contact your representatives and demand that Big Tech be held to account to mirror the First Amendment while providing equal footing for conservatives. If you have been censored, contact us using CensorTrack’s contact form, and help us hold Big Tech accountable.