Arch Manning: Is There a Pecking Order of Favorites for Top QB Recruit? 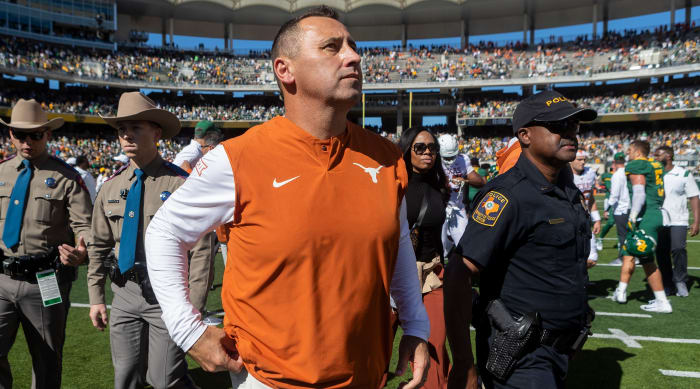 Sports Illustrated’s John Garcia, Jr. selects one question posed to him through social media each week to delve into the college football recruiting topics fans want to know most about.

Typically this feature will showcase a social media user inquiring about a hot recruiting topic, but our inbox is consistently flooded with Arch Manning questions, so the initial mailbag feature naturally will be focused on the sport’s most famous football recruit and the (multi?) million-dollar question.

Who Leads for Arch Manning?

Ask three consecutive days and there may be three different answers.

What we know, which the New Orleans (La.) Isidore Newman star pointed out on Monday in speaking with reporters for the first time this year, is that there is no true timeline for a final decision. That creates plenty as far as speculation goes on the trail for Manning, though the ball does still seem to be in the court of Georgia, Alabama and Texas — even though it may feel like a relative round-robin between the three at the very top of the list. The earliest a verbal commitment could seemingly come is before the season, likely July or August, assuming some of the planned trips take place during the official visit windows in late May or June.

With the timeline extended potentially as deep into the year as the fall, it will enable Manning to get a fresh look at programs with less stability and/or a proven track record on the list like Texas, LSU or Florida. It also means there is room for more fluidity in the recruitment overall. The pecking order, which Manning contends is yet to be established, has plenty of time to shuffle and re-shuffle before a final decision is to be made.

Most recently, a rock-solid source around the Manning recruitment suggested Texas had the most spring momentum, at least at that moment. The source suggested Georgia was the biggest threat to change said momentum but also contended that Alabama will remain in the race until the end in what has become a three-coach effort to pull Manning from Louisiana as the latest in a long list of elites from the Bayou looking to suit up for the Crimson Tide.

The week prior, a source closer to the Alabama side of the race said there was actually growing confidence in the chances Manning ends up in Tuscaloosa in the end. They were told among the selling points Alabama has at its back, including the most high-profile quarterback play and development relative to the other contending programs, is the way Nick Saban has personally recruited the NFL legacy. Hinting at lofty praise and promise in the pitch elsewhere, the source said UA’s approach has been about the opportunity to work and potentially contend down the line — if earned. That structure is said to be favorable in the Manning camp, per the source.

Dig into the Manning recruitment and one will find an easy-to-sell vision of how the generational quarterback talent could assimilate into some of the top programs in college football relatively seamlessly. Based on perception and a longstanding run of sourcing around the programs and Manning himself, one could construct the sell for each of the trio as the leader in the recruitment.

For Texas, it’s about the potential. Compared to the national title game participants from January, UT offers the opportunity to truly create a legacy at one of the programs that will support that rise most (or even before it truly starts if recent history is considered). The potential of the decision to go into the fall directly benefits Texas most considering it has to build the sell on the field to support what Steve Sarkisian and quarterbacks coach AJ Milwee have been able to project personally. Manning is plenty aware of the UT network, even golfing with former Longhorn QB Sam Ehlinger in March, and appears to draw closest to other UT recruiting targets he has overlapped with while visiting. Austin, as he said Monday, also has the most “city” feel of any of the options, something the New Orleans native is familiar with.

The Georgia sell isn’t hard to decipher, either, and the fact that the school has remained at the forefront of the race after assistant coach Matt Luke stepped back speaks volumes. Luke, the former Ole Miss head coach, had been arguably the college coach recruiting him most familiar with the Manning family overall. Since, offensive coordinator Todd Monken has reportedly stepped up to balance out the pitch from one of the top head coach recruiters of the modern era in Kirby Smart. The head Bulldog has recruited the position extremely well in his tenure (yes, including Justin Fields) but has yet to have that signal-caller push his offense over the top while at UGA. Looking at Manning as the possibility to bring that element to a program fresh off of the national title is enticing in and of itself. The star recruit also called Athens the best college town he has spent time in, which says a lot considering the proximity to Baton Rouge and so much familiarity with Oxford due to the family ties to Ole Miss.

Alabama’s sell starts with structure and Saban, of course, but shifts to recent success at the position with titles and three current NFL starters recently under center on his watch. Bill O’Brien, who was in to see Manning on Monday, sticking around as offensive coordinator provides offensive stability from one year to the next — relatively rare under Saban due to the success. Ace Louisiana recruiter Pete Golding, who was also at Newman High this week, offers the regional pull for the program Manning referred to as “a machine” this week. If the family is about development, even potentially sitting early on behind one of the deeper QB rooms in college football, Alabama can sell it as well as anyone in America of late.

Another key element of the process Manning admitted to on Monday was the three official visit destinations most likely to take place some time after the Greenies, installing a new offense ahead of his senior season, wrap up their spring football later this month. Yet to take an official visit to date, it’s about the only thing the Manning camp hasn’t really experienced in the modern era relative to the recruiting trail.

Those trips are more intimate, 48 hours on campus via the program’s dime, which in this case we could assume would involve a lot of the structure and/or trajectory sells (especially at Texas) in addition to play callers getting time on the whiteboard with one of the most polished quarterback recruits of all-time. If there is a recruitment where the back-and-forth in drawing up plays could become telling from prospect to program or vice versa, it would be the Manning recruitment. I’m also curious to see who shows up on those trips, as family is also a big part of official visits. Cooper, his father, has handled most of the recruitment but the three former NFL quarterbacks with the same last name could of course potentially tag along.

Finally, which of the new coaching staffs are still shooting their shot? It’s certainly understandable that Brian Kelly at LSU and Billy Napier at Florida would look to stay in the race for Manning any way they can. The lack of traditional recruiting milestones in this recruitment, for example publicly listing top programs or making any public eliminations, provides that much more hope for those newer to the race as far as time is concerned. Both of the new SEC coaching staffs have ties to the state of Louisiana and familiarity in courting blue-chip quarterbacks, so it’s worth keeping an eye on those with a puncher’s chance, especially if the 2022 season begins before we see Manning make a commitment.

On Monday, he said he would take in a game at LSU and potentially see Florida late in the summer months, so for due diligence purposes, it would be a relative surprise to see Manning make his final move before those events take place. Should either program hit the ground running, especially on offense or at the QB position, Manning could potentially reciprocate with official visits during the season. In that scenario, Kelly or Napier would get the last in-person impression before all is said and done.

Have a recruiting question? Connect with @SIAllAmerican and/or @JohnGarcia_Jr to submit yours and it could be featured on the next mailbag.