Ireland’s Proud Boys Are Western Chauvinists, But They Also Want to Get ‘Shit-Faced’ 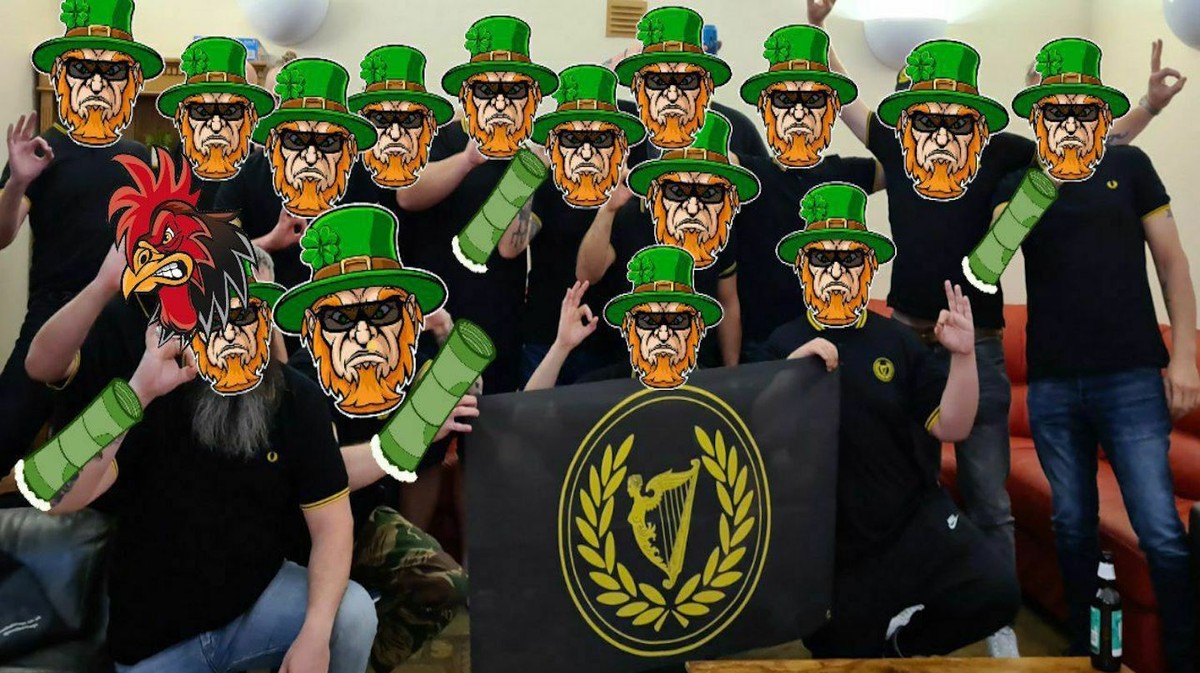 CORK, Ireland — It didn’t take long for the neo-fascist street-fighting gang known as the Proud Boys to make its way to Ireland. And in many ways the Irish group’s worldview is identical to its U.S. counterpart’s.

A quick review of the group’s Telegram channel, which has 1,300 followers, reveals the type of anti-trans, Islamophobic, misogynistic, and racist memes found in any U.S. far-right or extremist channel.

One member, who uses the pseudonym “Frank Irish,” makes no apologies for what members post. “Yes, we post some spicy shit, but offense is taken, not given. If a picture or meme upsets a person, they need to look at themselves. The world’s a shitty place,” he told VICE News.

However, as the U.S. chapters of the far-right street-fighting gang have become notorious for their involvement in numerous violent altercations and for playing a key role in the Capitol insurrection, the Irish chapter has disavowed violence completely, and is, instead, more interested in getting drunk.

The group does go out dressed in the infamous black and yellow Fred Perry polos, but only to go drinking. While some Proud Boys logos have been seen at anti-lockdown protests in Ireland in recent years, Frank claims these are individuals acting on their own rather than as part of their group.

“The U.S. has a rally culture Europe simply doesn’t have,” Frank told VICE News. “Any protests or rallies we go to we go as individuals. You want to smash heads, join an old firm. You want a men’s shed that gets shit-faced and lifts each other up, join Proud Boys.”

As a result, extremist researchers don’t currently view the Irish Proud Boys as a serious threat.

“We don’t see them as a feet-on-the-street type of people,” a spokesman for the anonymous group Ireland Against Fascism, which tracks extremists in Ireland, told VICE News. “Online trolling is all they can do, really. They are far removed from their U.S. counterparts in that respect, and I can’t see that changing anytime soon. There are too many other militant white supremacist types here in Ireland for the Proud Boys to gain any traction.”

The first version of the Irish Proud boys was established as a Facebook group in early 2017 just months after the original group was formed in New York, in September 2016. But that didn’t last very long; it was taken down as part of Facebook’s global efforts to tackle the group’s presence on the platform.

Version 2.0 of the Proud Boys in Ireland, known as “Proud Boys Eire,” was re-established almost immediately, but that, too, had a relatively short lifespan, descending into “an [Irish] Republican shitshow,” before being disavowed by the leadership in America and disbanded.

“Proud Boys Eire was so anti-UK that it went nowhere fast, and devolved into a full IRA love fest,” said Frank.

Over the last four years, though the Irish chapter has grown steadily, the group remains small; but that’s by design.

“There are roughly 30 solid guys, but it is growing faster every year,” Frank said. “We could be 200-plus if we let everyone in. Vetting takes up a lot of time.”

After someone requests to join, the group’s head of security, known as the sergeant-at-arms, runs a background check and if there are no red flags, the person is added to an online Telegram group with other potential candidates going through the vetting process where they hover in limbo and chat with other Irish Proud Boy hopefuls .

“That lasts for 6 months,” Frank said. “Then they are offered a prospect position at the club where they can take their 1st degree… which lasts for a year. Then a vote is taken on them on whether they are offered a 2nd degree or not. So all-in-all the process to become a voting member can take about 18 months to 2 years.”

There are four degrees of membership within the Proud Boys globally: The first is attained simply by declaring publicly: “I am a Western chauvinist, and I refuse to apologize for creating the modern world.” The second degree is earned by naming five breakfast cereals while being punched by other Proud Boys. The third degree involves getting a Proud Boys tattoo.

In the U.S., members who want to attain the final degree are asked to engage in a “fight for the cause,” but that’s not something that the Irish chapter requires—the Irish group is aligned with their U.S. counterpart for the first three degrees, but not the fourth due to the violence involved, according to Frank.

“Here it is done on a vote by the club if someone has provided extraordinary services to the club or his brothers,” Frank said.

Frank describes the day-to-day operation of the group as “similar to a sports club. Just planning where events are going to be and then maintaining the Telegram channel. Maybe organizing a merch run for funding.”

The Irish group is not an outlier, according to Frank. Instead it is part of a closely integrated European network of Proud Boys chapters in countries across the continent, including in Portugal, Spain, Italy, France, Germany, Belgium, Sweden, Norway, and the U.K., which mimics the structure of the state-level Proud Boys chapters in the U.S.

And there is even a “council of elders,” which is made up of members from the different countries and acts like an arbitration committee to resolve disputes—though Frank said it was rarely used.

Frank said he is in daily contact with members of Proud Boy chapters across the U.S., and tries to be a team player when others come to town: “Ireland gets a lot of visitors when guys come to find their roots, so we do a lot of hosting.”

Frank has also visited Proud Boys members in the U.S. When asked about the Irish chapter, the president of the Proud Boys’ Tulsa chapter, who goes by “partiboi,” told VICE News: “We’re an international club, of course I know about them,” he said, before describing them as “great lads.”

U.S. Proud Boys groups have recently begun taking part in charity drives in an attempt to improve their public image, and the Irish group follows suit. “We do homeless soup and sandwich runs throughout the year,” Frank claimed without evidence, adding that the group gives 10% of their funds to a charity once a year.

The Irish group also fundraises for something a little closer to home. They recently took part in the fundraising campaigns for arrested U.S. Proud Boy leader Enrique Tarrio, who is facing seven federal charges—including conspiracy—in connection with the Jan 6. Capitol riot. Individual and chapter donations from Ireland came to  totalling just over $1,000, the group told VICE News.

One member, whose name was leaked as part of the vast GiveSendGo leak earlier this year, is a builder from Wicklow, in the east of the country. When contacted by VICE News, he said: “I’m a proud Western chauvinist and I refuse to apologize for creating the modern world.”

When VICE News asked if he would be willing to be interviewed, he responded: “Go fuck yourself you fool there’s only two genders, uhuru,” using a Swahili word meaning freedom or independence that has become the global group’s tongue-in-cheek catchphrase they picked up from a YouTube video during which an activist talks to white people about reparations.

Tess Owen contributed to this report.

Disclosure: Gavin McInnes, who founded the Proud Boys in 2016, was a co-founder of VICE in 1994. He left the company in 2008 and has had no involvement since then.