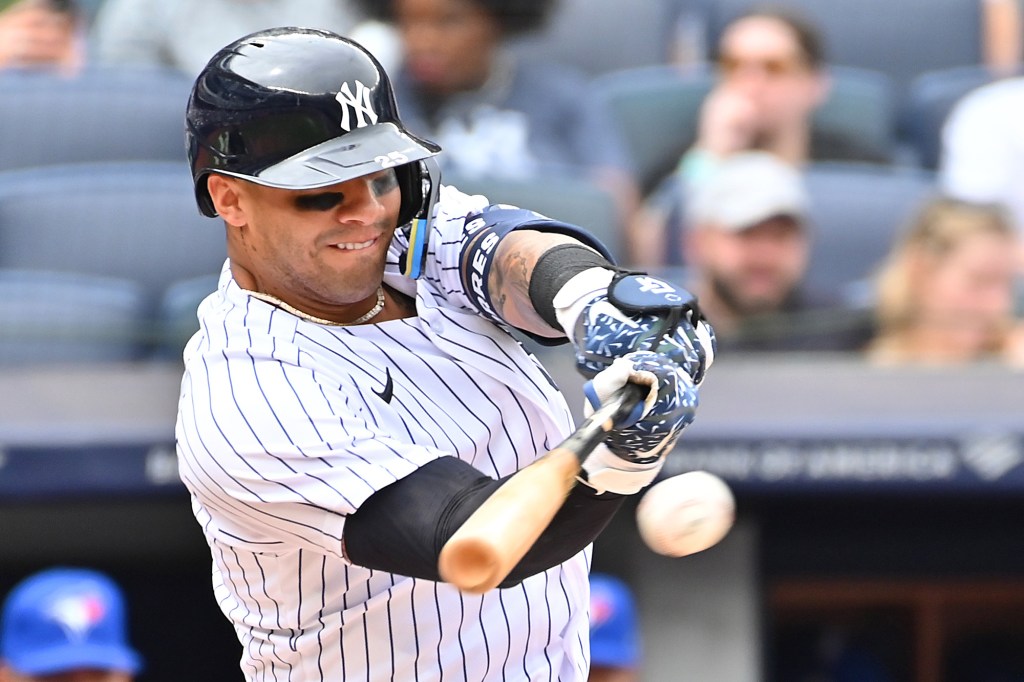 There’s nothing Little League about Gleyber Torres or the Yankees these days.

The second baseman homered and knocked in all five runs in the Yankees’ third straight victory, a 5-3 win over the Blue Jays in The Bronx on Wednesday.

Before the latest win, general manager Brian Cashman called the team’s white-hot first month of the season “a nice start so far. Nothing more than that.”

Maybe, but they are beginning to display some staying power, with 15 wins in their last 17 games and an MLB-best record of 22-8.

Aroldis Chapman provided some drama in the ninth, giving up a leadoff double to Santiago Espinal, a wild pitch and then a walk to pinch-hitter Vinny Capra.

Chapman got George Springer to fly out to right, scoring Espinal. Bo Bichette turned on a slider and just missed a game-tying homer to left, landing foul, before Chapman got him swinging.

Vladimir Guerrero Jr. popped out to end the game, as Chapman got the save.

Wednesday’s win was propelled by Torres, who had a three-run homer in the fourth inning and a two-run single in the sixth.

As usual, the Yankees got another solid performance from their starting pitcher, with Jameson Taillon allowing just a pair of runs in 5 ⅓ innings.

After Luis Severino got off to a rough start on Tuesday, giving up three runs in the first two innings — and needing 65 pitches to do so — Taillon loaded the bases with no one out in the top of the first.

Keep up with the most important sports news

Sign up for Starting Lineup for the biggest stories.

The Yankees’ offense didn’t get going against Jose Berrios until there was one out in the fourth.

Anthony Rizzo beat out an infield single and smartly moved to third on DJ LeMahieu’s base hit to center.

With runners on the corners, Torres — after hitting his “Little League” homer against the Rangers on Sunday — delivered another homer to right. This one came on an 0-2 pitch and gave the Yankees a 3-1 lead.

Taillon pitched around doubles in the fourth and fifth before faltering in the sixth.

Hernandez led off with a grounder to third, where LeMahieu took too much time to make the throw to first. Hernandez beat out what was ruled a hit. Taillon got Lourdes Gurriel Jr. to pop to second, but Alejandro Kirk followed with a single to center to send Hernandez to third.

Taillon was replaced by Michael King, coming off his lone poor performance of the season.

Matt Chapman drilled a fly ball to the warning track in left, where Joey Gallo made the catch, but Hernandez scored on the sacrifice fly to make it 3-2.

Espinal then hit a grounder to short and Isiah Kiner-Falefa dropped the backhanded play. He alertly picked up the ball and tossed it to second and Torres tagged Kirk, who came off the base, to end the inning.

The Yankees got to Berrios again in the bottom of the sixth, as Rizzo walked with one out and LeMahieu doubled to right-center.

Trevor Richards came on to face Torres, who delivered a two-run single to center to give the Yankees a 5-2 lead.

After King allowed a pair of singles, he was replaced by Clay Holmes with one out in the seventh to face Guerrero. Holmes fell behind 3-1 and then got Guerrero to hit into an inning-ending double play.