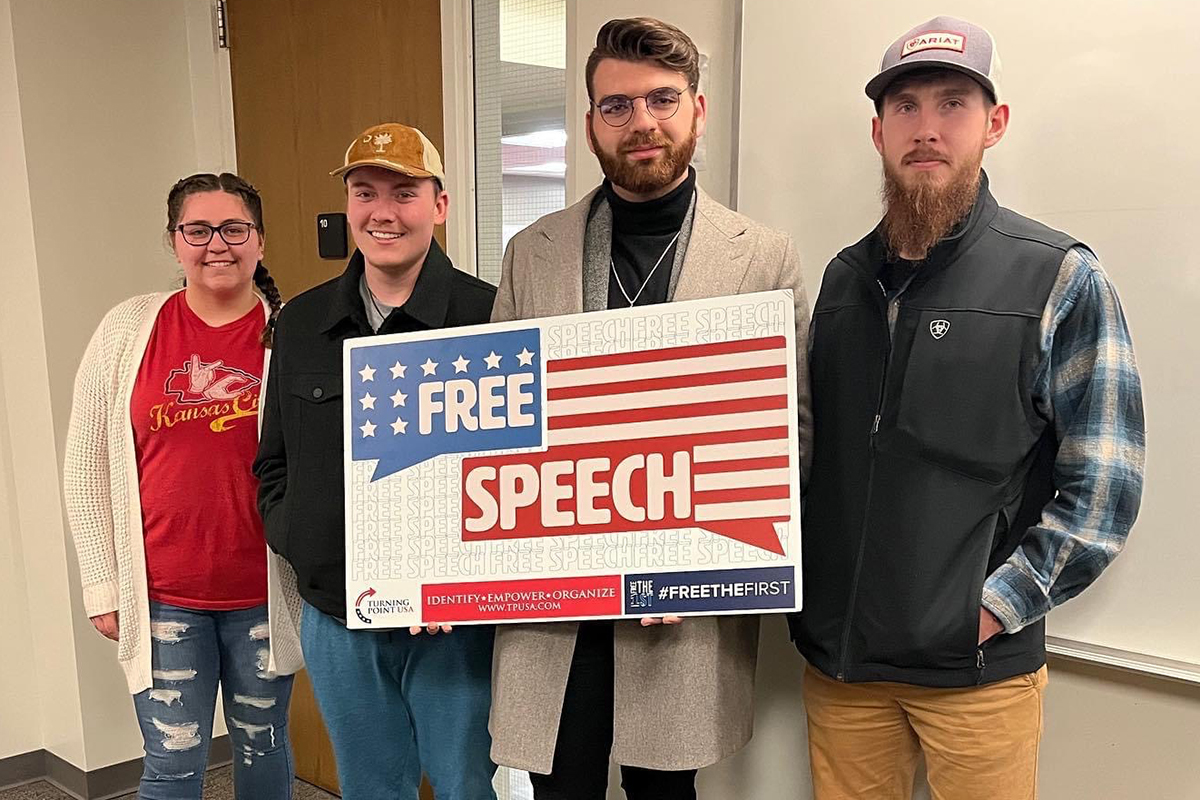 Student senator advocating denial: ‘I think everyone has a right to their beliefs, but I do think there is a point where those beliefs do become harmful to others.’

DES MOINES, Iowa, May 11, 2022 — After six years and three attempts at gaining official school recognition, prospective student group Turning Point USA is still in limbo at Drake University. The holdup? Drake’s student senators, who voted against the group for what they deemed its “harmful” conservative beliefs.

Today, the Foundation for Individual Rights in Education called on Drake to end the viewpoint discrimination and to promptly process TPUSA’s application for recognition.

“Why are student senators determining which beliefs are too ‘harmful’ to allow on campus?” said FIRE Program Officer Sabrina Conza. “These students were elected to the student senate, not the thought police. They represent the entire student body, not just the students whose beliefs make them feel warm and fuzzy.”

TPUSA has been active on Drake’s campus for six years, but because it is not a registered student group, the students cannot reserve event space on campus, apply for funding, or open financial accounts on campus. By continuing to deny recognition, the Drake student senate prevents the group from meaningfully participating in the Drake academic community.

“It’s truly disappointing,” said Drake TPUSA member Andie Morrissey. “A university that prides itself on being inclusive can’t seem to understand that being inclusive involves including those you disagree with.”

TPUSA previously applied for official recognition in 2016 and 2019. In 2019, the Drake Comrades, a communist student group, protested during TPUSA’s hearing and law enforcement intervened. The student senate had to relocate to another room, the TPUSA members were unable to enter the room, and there were no cameras allowed during the vote, which came out against TPUSA.

On March 24, TPUSA members attempted to gain recognition for the third time. A video of the student senate hearing shows student senators discussing TPUSA’s application and giving reasons for their decision to vote against TPUSA. One senator said, “I think everyone has a right to their beliefs, but I do think there is a point where those beliefs do become harmful to others.”

“I don’t quite see the necessity for an organization like this…” said another. “If this organization is making people on campus uncomfortable and frightened for their own safety, then I cannot support that.”

The TPUSA chapter has no record of any disciplinary misconduct and has not threatened anyone. Despite these facts, the student senate still denied the group recognition in a 17-2 vote.

One of the students who voted in favor of TPUSA’s recognition described himself as a “devil’s advocate” and correctly noted that “the prohibition against viewpoint discrimination is meant to protect groups across the political and ideological spectrum when they hold dissenting or unpopular views.”

Drake violates its own commitment to students’ rights when it allows the student senate to discriminate against a student group based on its viewpoint. Drake’s Community, Diversity, and Freedom of Expression policy states that the school “carefully refrains from restricting the exchange of ideas or regulating the content of speech” and “cherish[es] and defend[s] freedom of speech to the full extent protected by the First Amendment.”

FIRE’s letter calls on Drake’s administration to honor these commitments by stepping in and granting recognition to TPUSA.

“What should frighten Drake’s student senators is not other students’ opinions, but the prospect of losing their rights,” said Conza. “If the student government can unilaterally decide whose views are worthy of recognition, no one’s expression is safe.”

The Foundation for Individual Rights in Education (FIRE) is a nonpartisan, nonprofit organization dedicated to defending and sustaining the individual rights of students and faculty members at America’s colleges and universities. These rights include freedom of speech, freedom of association, due process, legal equality, religious liberty, and sanctity of conscience — the essential qualities of liberty.