Don’t Be Stingy, President Biden. Forgive As Much Student Loan Debt As Possible. 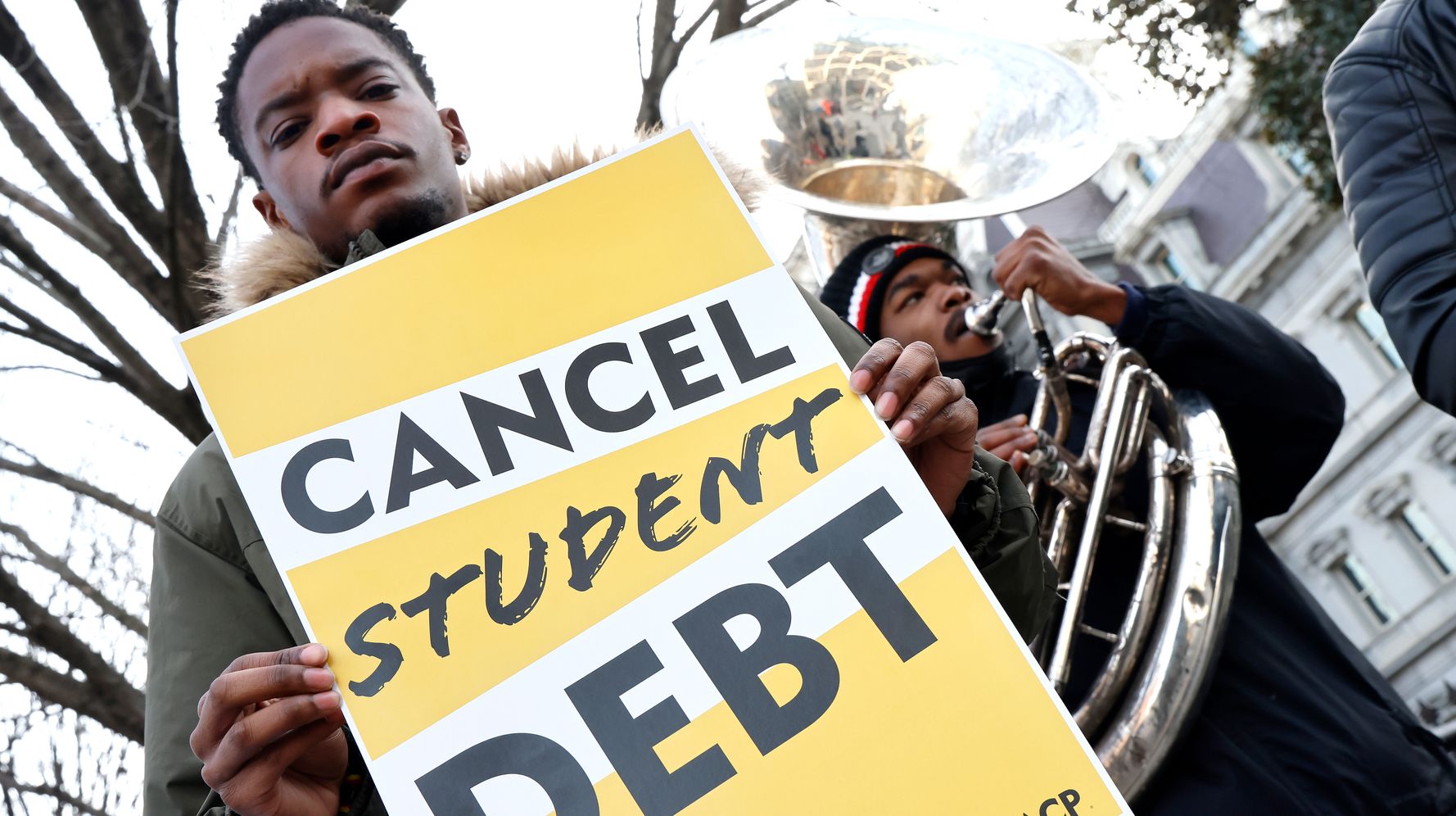 After months of being pressured by members of his own party, President Joe Biden recently revealed that he is “taking a hard look” into forgiving some federal student loan debt ― only perhaps not nearly as much as some have called for.

“I am considering dealing with some debt reduction,” Biden told reporters at the White House. “I am not considering $50,000 debt reduction. But I’m in the process of taking a hard look at whether or not there will be additional debt forgiveness.”

As for how long that “hard look” will take in terms of his decision making, Biden said he would have an answer on forgiving additional debt in the “next couple of weeks.” The remarks came days after separate reports surfaced that Biden expressed a similar sentiment during a meeting with the Congressional Hispanic Caucus. Rep. Tony Cárdenas (D-Calif.), who attended the meeting, explained that Biden never mentioned a specific amount he was looking to cancel, but noted the president claimed, “You’re going to like what I do.”

That remains to be seen, but as someone that has suffered greatly under the weight of federal and private student loan debt since graduating from college, I hope Biden not only uses this time to give it real consideration, but to not allow stinginess to be his guiding light should he proceed with cancellation plans.

Of course, Biden never made student loan debt a central theme of his campaign the way Sens. Bernie Sanders (I-Vt.) and Elizabeth Warren (D-Mass.) did in the 2020 Democratic presidential primary, but their policy proposals to eliminate either all or significant portions of student loan debt prompted then-candidate Biden to pledge to forgive $10,000 in student loan debt for every borrower.

Thus far as president, Biden has implemented various rounds of targeted student loan forgiveness to a small group of borrowers that has eliminated about $16 billion in federal student loans. Yes, that’s more than any previous president, but when 45 million Americans carry a total of $1.7 trillion in student loan debt, forgiving less than 1% rightly feels like a paltry sum. After all, student loan debt is the second-largest debt held by Americans, behind mortgages.

Biden has repeatedly extended a freeze on student loan payments and that has helped roughly 41 million borrowers save $5 billion in interest payments a month per the Education Department. That pandemic-era pause on federal student loan payments will last through August 31, but since 2021, the administration has said it was studying the legality of Biden’s ability to cancel debt through executive action, yet has repeatedly failed to release the long awaited memo. It’s one of many reasons why I, like others who care deeply about student loan debt and its impact on millions of Americans, have wondered if the Biden administration was planning to string borrowers along.

It’s nice to know that Biden will finally be giving Americans an answer in due time, but it’s been frustrating watching this administration take such a blasé attitude towards the sort of issue that would rally the kind of voters Biden needs most to show up in both the midterms and his looming reelection bid.

In a recent Harvard University poll, 85% of a total of 2,024 18-to-29-year-olds surveyed said they favor some form of government action on student loan debt. A separate national tracking poll from Morning Consult and Politico shows how approximately 64% of the 2,000 registered voters collectively support at least some amount of student loan forgiveness. An Economist and YouGov poll from January found that nearly half of all Americans and 70% of Democrats support forgiving student loan debt from public colleges and universities while another poll from Student Borrower Protection Center and Data for Progress found that 75% of Black likely voters and 80% of Latino likely voters support government canceling some-to-all student debt.

It’s already a popular issue, so if President Biden offered a coherent message on the importance of debt forgiveness and sold it as a means to lift millions of Americans out of needless struggle, I believe he could only increase the popularity of debt cancellation and benefit politically.

Besides, with respect to the Democratic base, Biden owes Black voters more than he’s offered thus far and this is one way to make a more meaningful impact in a tangible way.

According to a 2020 NAACP report, among 2016 graduates, almost 40% of Black students left college with $30,000 or more in debt, compared with 29% of white students, 23% of Hispanic students and 18% of Asian students. And according to a 2016 Brookings report, the average Black graduate owes $52,726 four years after graduation compared with $28,006 for the average white graduate.

A 2019 study found that $50,000 of federal student loan cancellation would eliminate all student debt for 93% of Black low-income households.

Black women in particular are disproportionately impacted by student loan debt, and although the freeze in payments has helped ease some of that burden, cancellation would make an even greater impact.

As Warren recently explained in a New York Times op-ed, debt cancellation “would help the millions of female borrowers who shoulder about two-thirds of all student loan debt, and for Black and Hispanic borrowers, a higher percentage of whom take on debt to attend college compared to white students, and have a harder time paying it off after school.”

Not only would this be the right thing for Biden to do on principle, it could also help him begin to atone for his own role in the 2005 Bankruptcy Abuse Prevention and Consumer Protection Act ― a law that made it impossible to declare bankruptcy on certain types of credit card debt and all student loan debt. Biden defended his role in the bill during the primary debate, but I align with Sanders’ assessment of the bill that it “was a very, very bad bill.” And as Senate Majority Leader Chuck Schumer (D-N.Y.) previously said, “It’s outrageous that other people get to declare bankruptcy but students can’t.”

Though not everyone may align with the viewpoints of these Democratic senators, their arguments against student loan debt still fail to impress.

Sen. Mitt Romney has suggested “desperate polls call for desperate measures” as the reason for Biden wanting to forgive student loan debt and claimed the move would constitute a “bribe.”

“Other bribe suggestions: Forgive auto loans? Forgive credit card debt? Forgive mortgages? And put a wealth tax on the super-rich to pay for it all,” he tweeted.

Romney forgot to include medical debt, but this sort of argument is to be expected from someone born into privilege and earned from profit via work in private equity.

The same can be said for Fox News’ Laura Ingraham who also argued in a tweet against student loan forgiveness because her mom had to work into her 70s to pay for her to attend college. “My mom worked as a waitress until she was 73 to help pay for our college, even helped with loan repayment. Loan forgiveness is just another insult to those who play by the rules.”

Ingraham is a famous racist whose own brother has condemned her. The “rules” are made for despicable people like her to benefit. And unshocking as it is that she believes everyone should suffer like her mama allegedly did, no one should mirror that type of selfishness.

Biden needs to ignore conservatives and rich people from his own party, like House Speaker Nancy Pelosi (D-Calif.), on student loan debt cancellation and think of the people suffering.

For many struggling with student loan debt, it not only impacts their ability to buy a home, start a business, move for a new job opportunity or start a family, it also contributes to their mental health and behavior. In a new study released in the American Journal of Preventive Medicine, researchers say student loan debt can impact heart health.

I wrote an entire book on how my student loan debt impacted every facet of my life. How at my lowest points, suicide was never the option as some feared for me because I was too aware of the reality that my mom would still be on the hook for my private loan debt as a co-signer.

I don’t share the selfish attitude that because I had to suffer, everyone else should. I have not benefited from the pause in federal student loan payments. I will not qualify for any of Biden’s potential cancellation options. I want student loan debt forgiveness all the same because I would never wish that misery on anyone else.

In a new analysis, the Federal Reserve Bank of New York estimated that canceling $50,0000 in student loan debt would forgive the full balance for almost 30 million federal student loan borrowers, with an average forgiveness of more than $23,800 per borrower ― at a cost of $904 billion. For comparison, U.S. military spending amounted to $801 billion in 2021.

So as Biden weighs his options on debt cancellation, if all else fails, perhaps he can be convinced to look at student loan debt cancellation as a war he can win with a shift in priorities and the stroke of a pen.