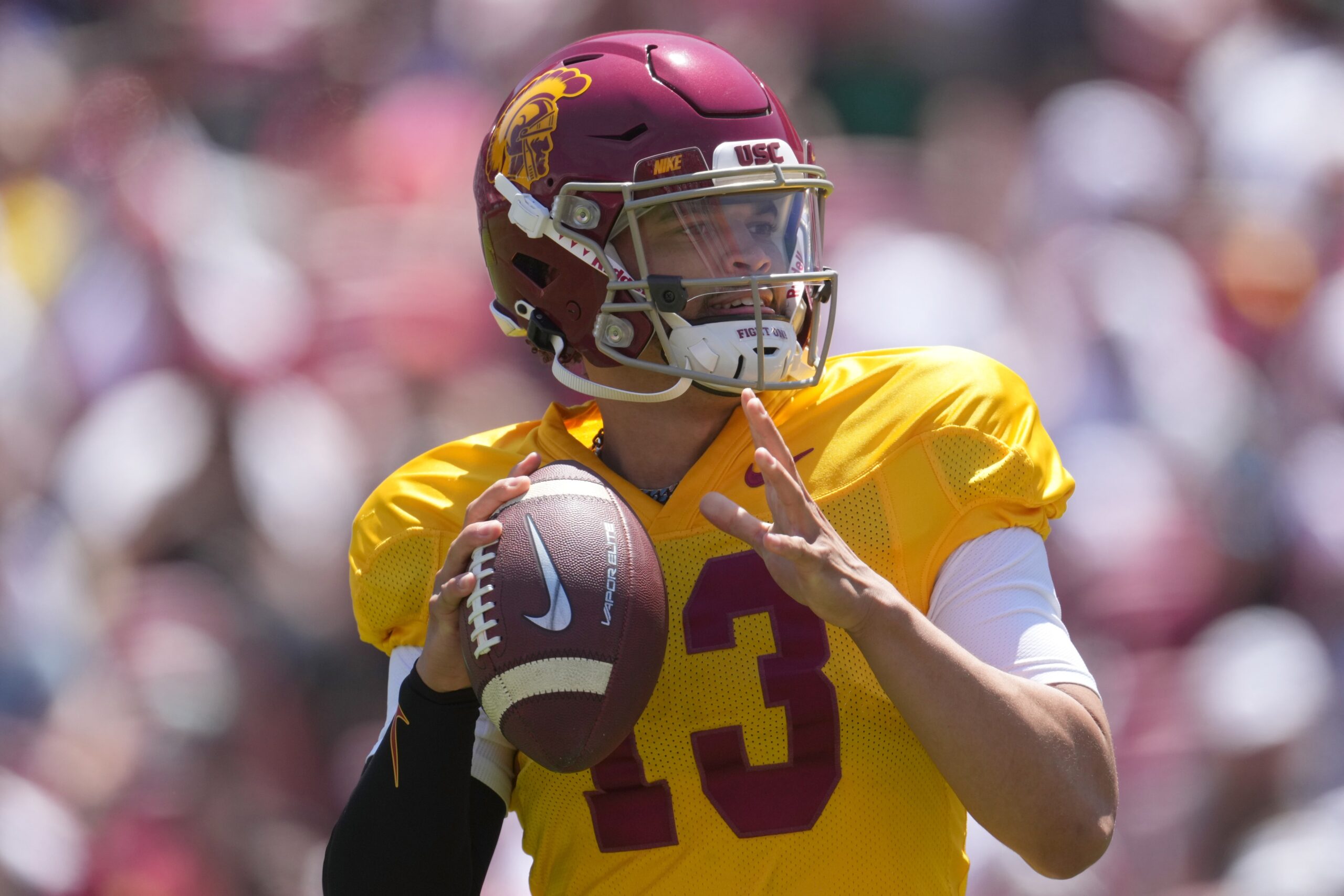 Love it or hate it, the transfer portal has become an integral part of college football roster construction. Between the end of last season and the start of the 2022 campaign, we’ve seen a number of top QBs enter the portal and find a new home. Who are the top transfer QBs ahead of the 2022 college football season?

While the transfer portal has some very vocal detractors — we’re looking at you, Dabo Swinney — it offers athletes the opportunity to make a new start. The reasons behind entering the portal could be one from a hundred; they could be multiple. Regardless of the motive, these top QB transfers have a new home for the 2022 college football season.

From the moment that Lincoln Riley opted to swap Norman for California, it was apparent that the Oklahoma Sooners were going to lose Caleb Williams. The former five-star dynamic playmaker usurped Spencer Rattler last season with a display of dazzling runs and impressive arm talent. Off the back of a campaign where he averaged 9.1 yards per attempt while adding 27 total touchdowns, Williams followed Riley to USC, where he gave fans something to be excited about with an excellent showing during their spring game.

He’s just 19 years old, but Quinn Ewers has already been on quite the journey. One of the highest-ranked high school prospects of all time, Ewers originally committed to Texas before decommitting, reclassifying, and heading to Ohio State. Despite not throwing a single pass for the Buckeyes in 2021, Ewers entered the portal, immediately becoming one of the top QB transfers ahead of the 2022 season. His return to the state of Texas puts him into one of college football’s top QB competitions against Hudson Card.

Tabbed to be the long-term successor to another of the top transfer QBs, Jaxson Dart provided a spark to a dull USC offense last season. However, injury limited him to just 1,353 passing yards and 11 total touchdowns. With changes in the coaching staff, Dart entered the transfer portal in early January and very quickly found a new home at Ole Miss. One of the best fits of any of the top transfer QBs ahead of the 2022 season, Dart is set to pick up the mantle laid down by Matt Corral’s departure to the NFL.

Once considered the potential QB1 of the 2022 NFL Draft class, Spencer Rattler had a dramatic and remarkable fall from grace at Oklahoma last season. Limping to just 1,483 passing yards and 14 total touchdowns, Rattler appeared to regress to some of the flaws that were apparent early in the 2020 season. That said, his arm talent alone makes the former five-star QB one of the top transfers ahead of the 2022 season. A fresh start at an ascending South Carolina program led by Shane Beamer may be exactly what he needs.

Now, this is an exciting one. If you’re looking for a Bailey Zappe-esque college football standout in 2022, Washington State QB transfer Cameron Ward may well be your man. The former Incarnate Word star ripped up the FCS last season, tallying 4,648 passing yard and leading that level with 47 touchdowns. His landing spot in the historically pass-happy Washington State offense should allow him to showcase his devastating arm talent in front of a national audience this fall.

Former UCF passer Dillon Gabriel was one of the first QBs to put their name in the transfer portal in advance of the 2022 season. Around Thanksgiving, Gabriel announced he would be departing UCF, having tallied over 8,000 yards and 70 touchdowns since becoming the full-time starter in 2019. The opportunity to play at the Power Five level saw him commit to UCLA. However, he turned his back on the Bruins and headed to Norman, where he’ll be the starting quarterback for the Oklahoma Sooners for the 2022 college football season.

While Max Johnson might not be the star name in the transfer portal puzzle, the former four-star QB has the potential to emerge as one of the top QBs in 2022. After throwing for 3,884 passing yards in 18 appearances for LSU, he provides experience and football intelligence to the Texas A&M quarterback battle. While Haynes King starts summer camp as the QB1 favorite, don’t rule out Johnson coming to the rescue if King struggles like he did prior to injury last season. In a sea of five-star talent, Johnson may steady the ship.

It’s been a rough couple of seasons for Kedon Slovis. Between battling injury and battling for his job, he’s never quite recaptured the form that saw him blow up college football as a freshman. In that season, he showcased glimpses of exceptional talent as he put together a 30-touchdown, 3,502-passing-yard campaign. He still holds the NCAA record for completion percentage by a freshman. One of the top transfer QBs, the 2022 season gives Slovis a chance for redemption at a Pitt program primed for another powerful performance.

It’s not just college coaches and media analysts that have been vocal about the transfer portal. Following Jayden Daniels’ decision to enter the portal and transfer to LSU, his former teammates trashed his abandoned locker in a video that went viral. The slender superstar appeared set for great things after a standout season as a freshman in 2019. However, two difficult campaigns later see Daniels head to Baton Rouge, where he’ll face a stiff competition with Myles Brennan, Garrett Nussmeier, and Walker Howard.

A career completion percentage of just 54% and a 13:10 touchdown-to-interception ratio over three seasons might not scream top QB transfer talent. However, Levi Williams ended his Wyoming career in spectacular style. In a bowl game win over Kent State, the 6’5″ QB rushed for 200 yards and 4 touchdowns while completing 81.8% of his passes. Williams transfers to Utah State and will battle with incumbent QB1 Logan Bonner for the right to head up an Aggies passing offense that averaged 8.4 yards per attempt in 2021.

Top QBs remaining in the transfer portal ahead of 2022