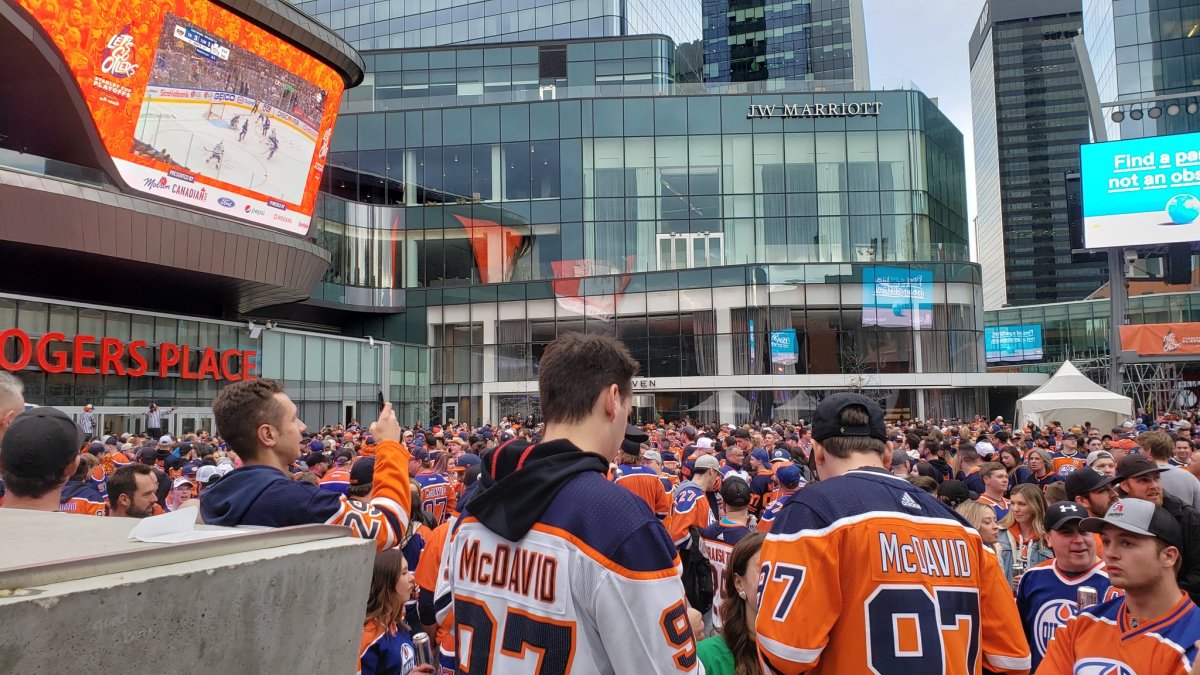 Can’t make it into an arena to watch a playoff game? Outside it might be the next best place.

Fans crowding together to watch a game has become quite popular around the league, such as at Maple Leaf Square outside of Scotiabank Arena in Toronto. This spring finally saw the Oilers open up their outdoor area for fans to watch games and soon take in other events this summer.

The idea of a proper outdoor area for fans goes back to the vision of what Rogers Place and the surrounding area were going to look like before its 2016 opening.

According to Oilers Entertainment Group’s VP of communications and gaming, Tim Shipton, the area that contains the plaza, formally known as the ICE District, was made to not only help develop the downtown core but become a hub for Oiler fans of all ages.

The area received a fitting nickname for a popular figure in the Edmonton sports community. It’s called the “Moss Pit”, named after long-time Oilers dressing room attendant Joey Moss, who passed away at the age of 57 in 2020.

Both Game 1 and Game 2 were packed to the brim. For Shipton, he wasn’t shocked to see fans of all ages enjoying themselves in the area, even at the start of the work/school week.

“I wasn’t surprised that Oilers fans stepped up the way they did to cheer on the team, it was all the more impressive that it was done on a Monday night,” he said.

The Moss Pit contains food trucks, an alumni station and even a live band.

For Oilers fans like Danny Chamberlain, the square is something that raises the profile of the city and gives the area a gameday experience that mimics the experiences of professional teams in other leagues.

“It’s nice to see Edmonton finally catching up with the rest of the sports world, having a pregame experience that’s very similar to a tailgating experience in the NFL”, Chamberlin said.

“It’s awesome to see the town get together and have a really nice place to bond with each other,” Oilers fan Baron Paccagnan added.

For Michael Wilson, he also saw the similarities of what has been done in Toronto while standing outside in the nice spring weather.

“It’s like Jurassic Park in Toronto, the best thing about playoff hockey is getting to watch when it’s nice outside and it’s not brutal, it’s not dark at 4 PM, it’s not snowing,” Wilson said. “It’s getting out there and enjoying outside but enjoying hockey, there’s nothing better”.

Michael’s brother, Jordan, said the team’s success is something that truly brings the city together, especially after the past two years.

“It really brings Edmonton together,” Jordan said. |I really think if you don’t support the Edmonton Oilers and you’re from Edmonton, you’re going to be in the minority, I feel like a lot of people from Edmonton and area support the Edmonton Oilers. It’s the only thing we talk about at work, how well they’re going to do, how they’ll perform, playoff hockey is different, it brings a different kind of energy to Edmonton.”

The Moss Pit is here, and Edmonton’s hockey scene is better for it.