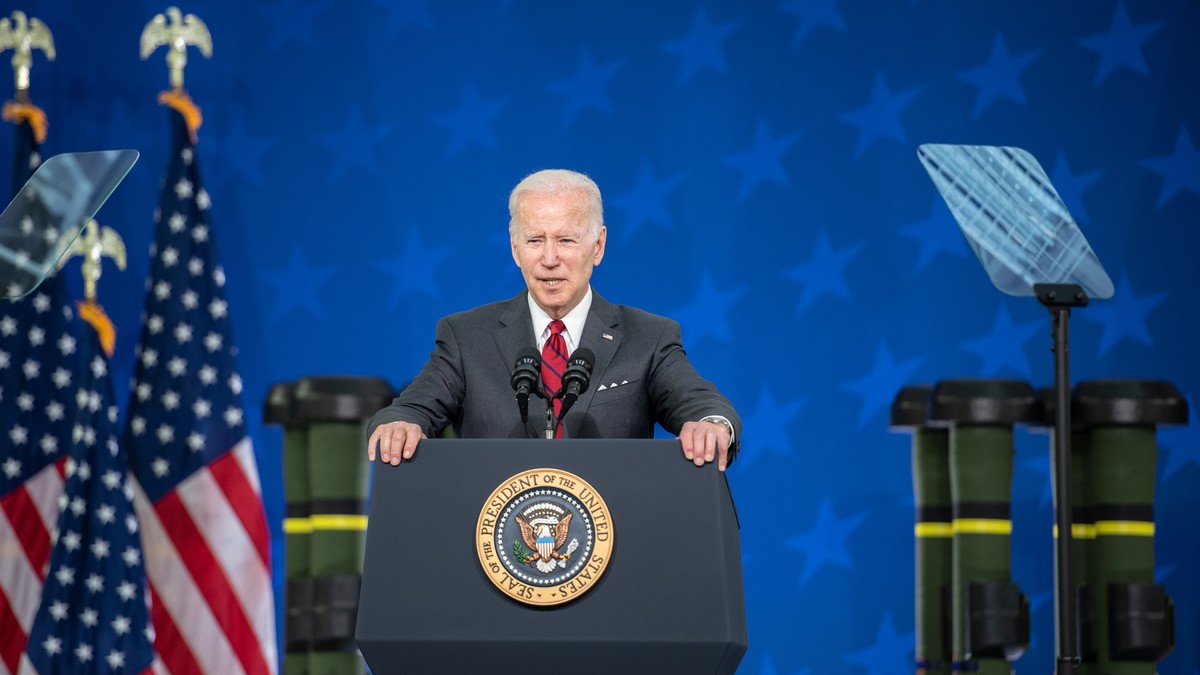 President Joe Biden visited a Lockheed Martin weapons factory in Alabama last week, in a show of support for the defense industry that his administration is relying on to help arm Ukraine against Russia.

Since the war began in late February, the controversial defense sector has benefited from U.S. weapons transfers to Ukraine, seeing a surge in stock valuations as investors view it as a good bet in the coming months and years. While it’s common knowledge the arms trade benefits from major global conflicts, top brands like Lockheed, the largest arms maker in the world, and Raytheon Technologies say supply chain issues have hampered production and the new government money has yet to truly reflect in their earnings. (Reports have already pushed back on those claims as NATO governments and their allies look set to spend big on military goods and point out the defense industry is now experiencing the same spike in growth as with regional wars of the past.)

Several American-made products have been game-changers on the battlefield in Ukraine and are partially credited for allowing the smaller Ukrainian military to repel the invading Russian forces. In particular, Raytheon Technologies’ Stinger anti-aircraft systems and Lockheed Martin’s anti-tank Javelins (which it partly makes with Raytheon) enjoy cult-like status in Ukraine as holy weapons.

“You know, some of the best, most effective weapons in our arsenal is the Javelin,” Biden said at the Lockheed Martin plant to workers making the anti-tank missile launchers, standing at a podium with Javelins sitting in the background. “Missiles like the ones manufactured right here by our country are highly portable, extremely effective against a wide range of armored targets and can hit targets up to 400 meters away and have a fire and forget capability.”

The president told the Lockheed Martin workers that they were at the forefront of a battle between global autocracies like China and Russia, and democratic countries like the U.S. and its allies.

“You’re making it possible for the Ukrainian people to defend themselves without us having to risk [entering] a third world war by sending American soldiers fighting [against] Russian soldiers,” he said.

Biden, who’s been criticized for being too cozy with the defense industry, announced weeks ago that he is asking Congress to green-light a $33 billion package of military, humanitarian, and economic assistance for the government of Ukraine. That package earmarked billions of dollars worth of weapons for Ukraine (some from Pentagon stockpiles that will need to be replaced), and is likely very welcome news to the defense sector. The aerospace and defense trade, though, had a “down” year in 2020, as revenue dropped to a still-staggering $874 billion, according to industry figures.

Do you have information about the defense industry? We’d love to hear from you. You can contact Ben Makuch securely on Wire at @benmakuch or by email at ben.makuch@vice.com

Dan Grazier, a senior defense policy fellow at the federal government watchdog Project on Government Oversight (POGO), said that despite some of their downplaying, big arms companies look at the war in Ukraine as a conflict that will boost their sales, directly or indirectly.

“This is a kind of well-known phenomena about how when war starts there’s plenty of people that it’s going to make a lot of money,” Grazier said, explaining that the defense industry was already reeling from the Afghanistan war pullout and a new conflict in Europe could be seen as a cash injection.

“The Ukraine war kind of came at a good time (for the arms industry),” Grazier said. “In August when the Afghanistan war ended, when you had some of the CEOs of defense contractors lamenting the fact that the war ended and they were expecting a hit to their bottom line… when the [Ukraine war] started, there were people there almost eagerly anticipating it—you know, big, big profits.”

While Congress slowly rolls out spending plans and contracting to support Ukraine, the emboldened Russian threat and the war in general has caused a chain reaction sure to profit American defense contractors: Germany will for the first time in decades majorly spend on its military, while countries neighboring Ukraine, like Poland, have already signed new deals for U.S.-made heavy weapons and tanks.

This is all coming within the mere opening months of the conflict, which many expect to last and may even spill into other theaters of war throughout 2022.

On a CNBC news show in late January, Raytheon Technologies CEO Greg Hayes was already projecting a Russian invasion of Ukraine could see his company benefit by arming NATO and its allies in the fight.

“Obviously we have some defensive weapons systems that we could supply, which could be helpful,” Hayes said. ​“One of our core missions is about supporting the warfighter and helping our allies and country defend democracy. We’ve got the technologies to help in these engagements.” Then in April he told investors on an earnings call that his company expected $750 million less in revenue since sanctions prevented Raytheon from selling to the Kremlin. But that was only one piece of bad news, erased by the fact the company upgraded its earning expectations to $68 billion (up 6 percent since the war started).

So far the gargantuan Biden spending package, which is already experiencing some resistance from the historically-hawkish-on-Russia GOP, has not allowed the defense sector to completely avoid the last few weeks of market instability (stock prices for Lockheed Martin and Raytheon are both down slightly from spring highs). But even more contracts are on the horizon as the Pentagon has put out a formal request to all weapons-makers it needs help to fulfill its mission to supply Ukraine with arms. And despite the last few turbulent weeks on the market, stock prices for many defense companies (including Lockheed and Raytheon) are well above pre-war levels;.

The Biden administration is aware that sending large percentages of the Pentagon weapons stockpile to Ukraine will also require some replacements, which the weapons industry will no doubt, eagerly fulfill. On Sunday, in another sign that business from the new war can’t be that unprofitable, Lockheed Martin CEO James Taiclet told Reuters in an interview that his company will nearly double its annual production of the Javelin from over 2,000 to north of 4,000 per year (which may take them several years). Taiclet also said he expected demands for those types of systems to increase globally, citing the threats of Russia and China, with rival countries arming up with the kinds of weapons Ukraine has already used to great success against a much larger foe.

PrevPrevious‘Doctor Strange in the Multiverse of Madness’ gives fan service the middle finger in the best way possible
NextRussia is ‘failing’ in Ukraine war, Blinken saysNext