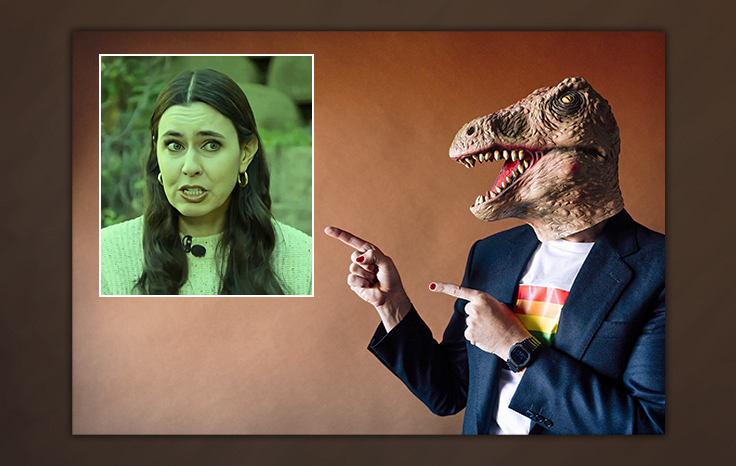 Social media users and other internet aficionados can’t stop talking about the Taylor Lorenz “lizard person” scandal. If you’re an ordinary person, you probably have no idea what all the fuss is about. Wouldn’t it be nice to learn enough to take part in the conversation? (It would.) Ok, then, allow us to explain.

What all the fuss is about: Washington Post reporter Taylor Lorenz on Monday revealed a number of bizarre details about her life, raising questions about her humanity. The nation’s preeminent TikTok journalist said she is constantly thirsty despite drinking “about 3 gallons of tap water daily” and keeps the temperature of her Los Angeles apartment at a balmy 87 degrees.

Why it matters: Reptiles are “cold blooded” creatures, which means they require a warm habitat in order to maintain a suitable body temperature. Most lizards and snakes, for example, thrive in temperatures of between 80 degrees and 95 degrees. An abundance of water is also essential to a reptile’s ability to survive in captivity. According to the reputable website Petplace.com, “Nothing is more important in keeping a reptile than providing an easily accessible, clean water source. In fact, water is the most important nutrient.”

Be smart: Lorenz has previously admitted to suffering from trichotillomania (hair pulling disorder) and dermatillomania (skin picking disorder), which sounds like precisely the sort of maladies that would afflict a reptile inhabiting a human body. Additionally, reptiles tend to age at a faster rate than humans, which could explain why Lorenz has such a hard time discussing her true age.

The bottom line: Lorenz eventually acknowledged the truth after some internet sleuths started connecting the dots. “The rumors are true, I am a lizard person,” she wrote, definitively.

Reality check: The notorious journalist, who describes herself as “the most online reporter that you can find,” has a history of making things up for attention. Perhaps this is yet another calculated move designed to cultivate Lorenz’s personal brand as a media influencer. If she is, in fact, a bonafide lizard person, it would answer a lot of questions about the journalist’s shenanigans. It would also raise a lot of troubling questions and challenge many of our assumptions about the human race and our place in this vast universe.

Rest assured: The Washington Free Beacon will continue to investigate!