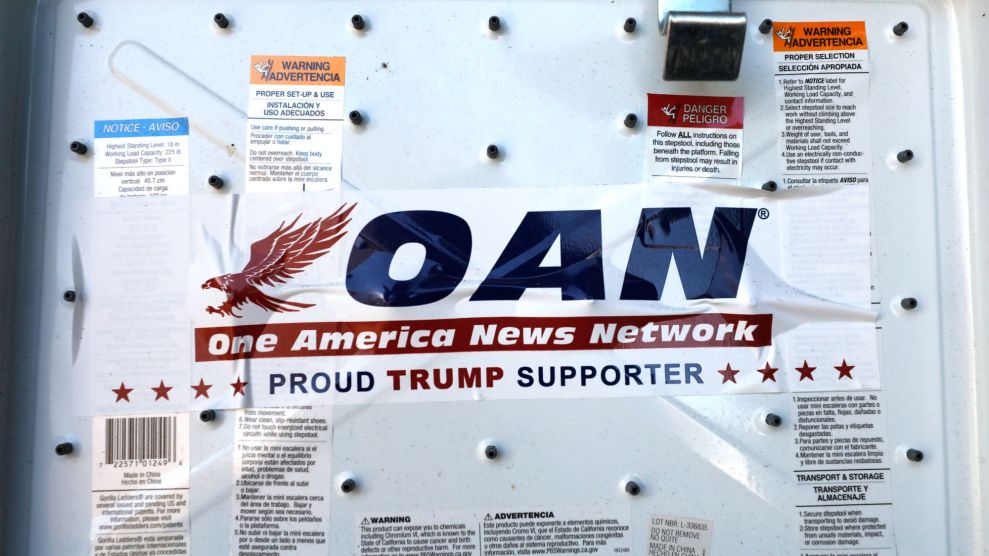 One America News, the right-wing cable network, aired a 30-second segment yesterday essentially admitting the falsity of its previous “reporting” on supposed voter fraud by two Georgia election workers. The prerecorded statement aired shortly after OAN settled a defamation suit brought by Fulton County election workers Ruby Freeman and her daughter Wandrea “Shaye” Moss, whom the network had falsely accused of participating in a conspiracy to steal the 2020 election.

“The results of this investigation indicate that Ruby Freeman and Wandrea ‘Shaye’ Moss did not engage in ballot fraud or criminal misconduct,” a narrator states in the segment. “A legal matter with this network and the two election workers has been resolved to the mutual satisfaction of the parties through a fair and reasonable settlement.”

During their desperate campaign to seed doubt about the validity of Biden’s win, right-wing media outlets and Trump surrogates latched onto surveillance footage of Moss and Freeman counting votes, saying that the women were pulling suitcases of “illegal” ballots from under a table and fraudulently counting them. These claims were quickly refuted by both Georgia’s secretary of state and the Georgia Bureau of Investigation, which found that the “suitcases” were actually just standard ballot containers with legitimate votes.

Nevertheless, OAN and other outlets continued to accuse both women of fraud. As a result of the lies, Freeman and Moss were reportedly stalked, doxxed, and targeted with death threats. As I wrote in December:

For Moss and Freeman, the fallout was devastating. After retiring from her job as an emergency call coordinator, Freeman had started a small boutique that sold fashion accessories online, but she was forced to shutter that business when her social media accounts were flooded with threats and racist messages.

According to a Reuters investigation that detailed the harassment, Freeman’s home address was posted on social media platforms, and Trump supporters publicly called for her execution. Strangers camped outside Freeman’s home and ordered pizza for delivery to lure her outside. Photos of Moss’ car and license plate were posted online. On two occasions, Moss told NPR, strangers attempted to force their way into her grandmother’s house—where Freeman used to live—and make a “citizen’s arrest.”

The OAN segment doesn’t reference the abominable consequences of the network’s conspiracy-mongering, but it’s probably the closest thing to a mea culpa that it will issue.

Freeman and Moss have also filed suit against the Gateway Pundit, a right-wing blog that pushed a series of baseless claims about them. That suit is still pending.