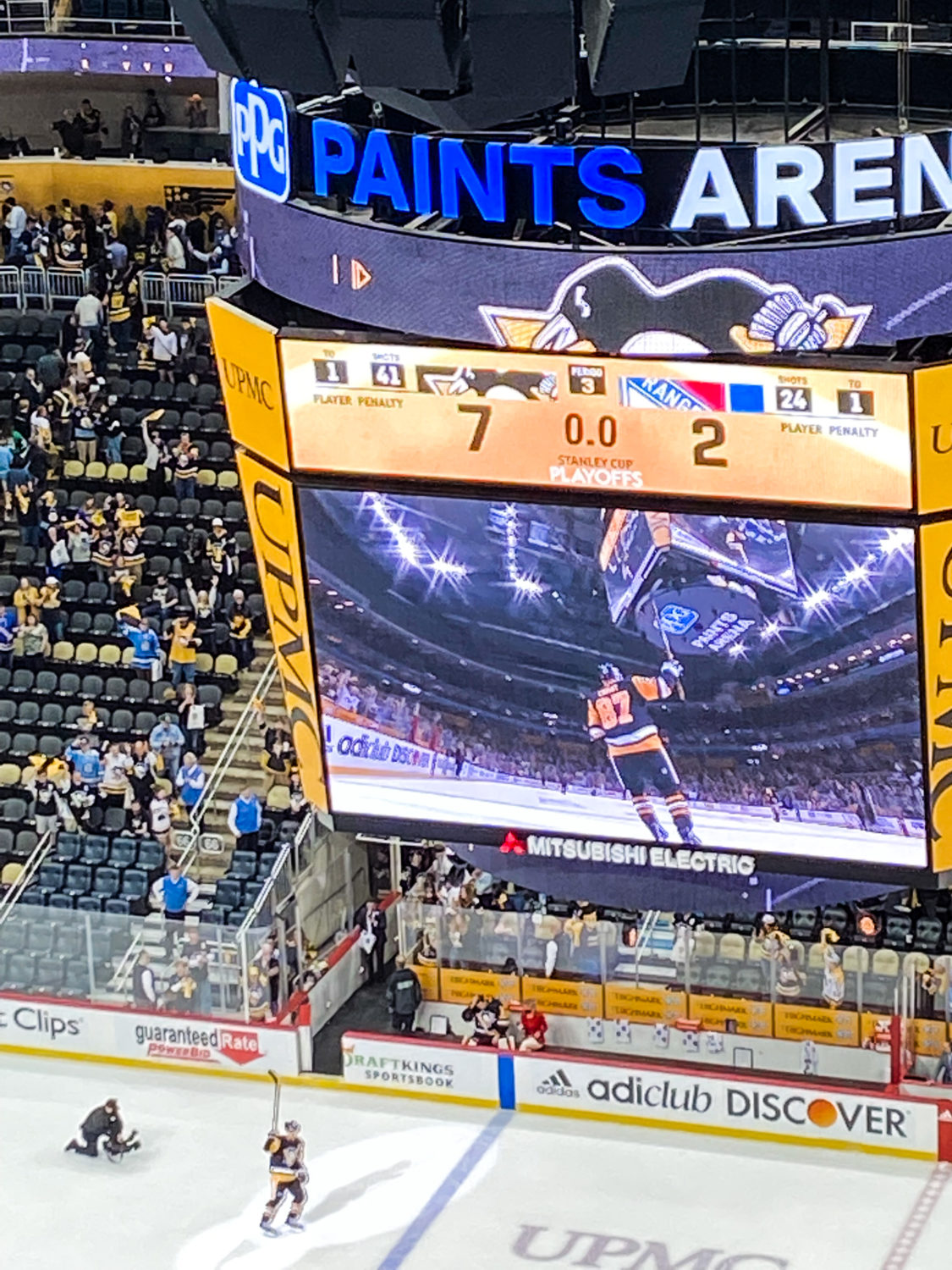 The start of Game 4 didn’t bode well for the Penguins. Just two minutes in, 20-year-old Alexis Lafrenière found the back of the net for his first career playoff goal, with Penguins blueliner Kris Letang screening goalie Louis Domingue while not providing much in the way of defensive help.

But it was what the Penguins did midway through the period – specifically captain Sidney Crosby – that changed the course of the game and, potentially, the series.

With the Penguins on the power play, Crosby got the puck down low at the goal line, and pressured until Rangers goalie Igor Shesterkin’s pad went deeper into the crease and the puck fully crossed.

Clutch goals to tie the game? It’s what Sidney Crosby does. pic.twitter.com/b5EPBCkmqC

It was a battle in the crease and Crosby came up with the win. Tied 1-1, the Penguins got a new game on the scoreboard, and new life.

“There was a lot of hockey left, I think we knew that, but to get one on the power play was nice,” Crosby said. “Just to get that momentum back and get the crowd into it. I think at that point it was just more trying to get the next one, but our game was in a pretty good spot, even with them scoring. I thought we were on our toes and playing the right way.”

The Penguins were on their toes, all right, and as momentum started to shift, the Rangers were on their heels. Pittsburgh stormed out to a five-goal second period – importantly, with goals from five different players, including two defensemen and two bottom-six forwards along with one of their usual suspects in Jake Guentzel – and a capper from Evgeni Malkin midway through the third to win in a 7-2 rout.

“Total team disappointment,” said Rangers head coach Gerard Gallant. “There wasn’t much commitment to playing defense tonight. Tonight you [saw] a lot of bad plays by a lot of people.”

PPG Paints Arena once again rained chants of “Ig-or” down on this year’s likely Vezina Trophy winner throughout the contest before he was, stunningly, pulled for the second time in as many games. And when backup Alexandar Georgiev took the net for the third period, the taunts continued, with the chants changing to “We want Igor.”

Key to beating Shesterkin has been the Penguins’ willingness to go to the net – the battles in the blue paint that weren’t always part of their game in the regular season.

“Obviously he’s a heck of a goalie, arguably the best goalie in the league all year,” said forward Jeff Carter, who scored the Penguins’ sixth goal. “We’re trying to make it tough on him, get pucks and bodies there, and luckily we’ve had some success here. We’ve got a long ways to go, though; I’m sure he’s going to bounce back.”

“You want to try to preach good habits all year; you don’t want to just have to flip a switch in the playoffs and try something new,” Crosby said. “I think it just comes down to competing, and tonight we got some tips. Do those always go in? Not necessarily. This time of year, it’s just throwing pucks at the net and creating havoc. It comes back to just competing near the net.”

With his goal and two assists, Crosby became the sixth player in NHL history to top 200 career playoff points. His nine points (2G, 7A) so far are tied for the league lead, and he looks to be playing at his highest level in some time.

“I think everybody wants to play well in the playoffs,” Crosby said. “I haven’t really thought about it that way; it’s playoff hockey and you just try to go out there and compete the best you can.”

“He’s played some real good hockey in the playoffs in my time here, so that bar’s really high,” said head coach Mike Sullivan. “But I will say he’s playing a real complete game, both sides of the puck. He’s playing an inspired game. He inspires the group just through his actions when he’s on his game the way he is right now.”

If Crosby was going to inspire the group Monday, his complete game on both sides of the puck was a good place to start. Unlike Saturday, when the Penguins blew a 4-1 lead and had to battle to get back ahead, they played a smart enough game Monday that, once they were up by a few goals, the outcome never felt in doubt.

“When you go through a second period like we did the game before and you give up a three-goal lead, that’s not an easy circumstance,” Sullivan said. “I thought we did a terrific job moving by it and getting back to the game that’s brought us some success.

“That’s not an easy thing to do when you’re in the moment, because these guys are proud guys, and it’s not a good feeling when you walk into that locker room. I think that’s where our experience and our leadership came to the forefront. Those guys led the charge for us; I think it carried over tonight. We’re going into the third period with a few-goal lead; it wasn’t a dissimilar circumstance. We did a much better job at making sure that we controlled what we could to not allow that circumstance to occur again.”

They did it with their best effort of the series as far as their play away from the puck.

“I thought we did a better job at limiting some of the odd-man rushes,” Sullivan said. “We were on the right side of the puck for most of the night, trying to make it hard for the Rangers to get quality looks. They’ve got some dynamic players offensively, and we’ve got to do our best to make them work for their opportunities.”

“They’re a pretty highly skilled team, and no one likes their time and space taken away,” said defenseman Mark Friedman, who scored the Penguins’ fourth goal. “I feel like the past couple games we’ve been doing a good job of that, especially on their top line, and limiting their odd-man chances again. It’s a whole team effort out there.”

The Penguins head to New York for Wednesday’s Game 5 with the very unexpected opportunity to close out the series.

“I think we know we have a lot of work left, and you know you’re going to see that team’s best the next time,” Crosby said. “We’ve definitely got an opportunity, but we know it’s going to be a big challenge going into New York. We’ve done some good things but, like any series, you’ve got to find ways to get better as it goes on, regardless of the outcome. We’ll try to go that for Game 5.”

“Obviously we battled some adversity throughout the whole year,” Friedman said. “But playoffs are a different animal, it’s a completely new season and, if you get hot at the right time, you can go as far as your best players take you. They’ve been doing that so far.”