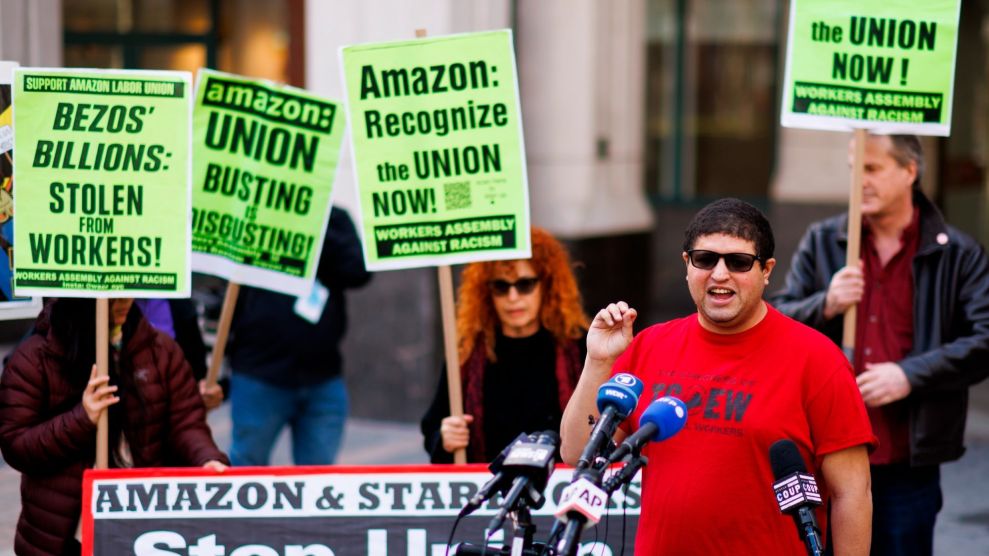 Ever since workers at Starbucks and Amazon initiated the location-by-location process of unionizing, labor activists have accused both companies of union-busting activities ranging from the manipulative to the illegal. The National Labor Relations Board, the agency that enforces federal labor law, recently found merit to some of these claims, a potential sign that both companies could be held to account for their actions.

According to a complaint filed by the Amazon Labor Union, the retail giant forced workers to attend “captive audience” meetings where company officials dished out anti-union talking points. As of now, this practice is permitted under NLRB precedent, but the board’s general counsel, who was appointed by Biden, issued a memo last month arguing that it is actually illegal.

During an interview with CNBC, an Amazon spokesperson didn’t dispute that the company had held mandatory meetings but cast them as legal attempts to ensure “that everyone understands the facts about joining a union and the election process itself.”

However, Amazon did dispute allegations that it had engaged in a slew of other union-busting activities, including falsely hinting that workers could be fired for voting to unionize and threatening to withhold benefits, even as the board claimed that those accusations have merit.

Matt Jackson, an attorney with the NLRB, told the New York Times that the agency would soon file a complaint unless Amazon agreed to settle.

Almost simultaneously, the board has found merit to allegations that Starbucks engaged in unfair labor practices, issuing a complaint that accused the coffee company of engaging in 200-plus violations of labor law. According to CNBC, the board alleged that Starbucks had threatened workers by reducing their compensation, surveilling and firing pro-union workers, and closing down stores in the Buffalo area, where unionization efforts began.

The complaint follows a similar filing that the board put forth last month in which it asked a judge to force Starbucks to rehire three union activists that the company had fired.

NextMississippi Governor Leaves Open the Possibility of Banning Some ContraceptivesNext