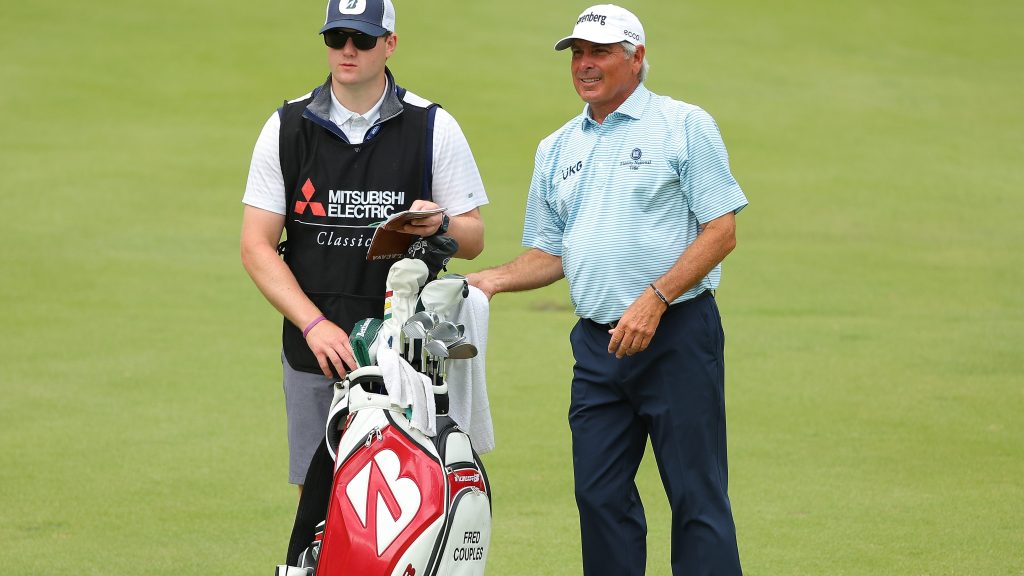 The 62-year-old Couples was looking for a caddie for the Mitsubishi Electric Classic in Atlanta and hooked up with a familiar name, only this time it was the son of his former caddie who was by his side.

“I came here and told a lot of people that, yeah, I’ve got LaCava caddying for me,” Couples recounted, referring to Joe LaCava who worked for him for 22 years. “I didn’t really say, Joseph (the name of LaCava’s son). So he came and they all knew who he was immediately. He’s a superstar.”

Joe Sr., has worked for Tiger Woods in recent years, including at the 2019 Masters, and LaCava’s son has caddied for the past two years at the PNC Championship for Charlie Woods. When borrowing another player’s bagman, it’s customary to ask permission. Tiger once asked to use Fluff Cowan at the start of his career when Peter Jacobsen was injured and later Adam Scott requested to use Steve Williams while Tiger was sidelined. Couples thought it was only proper to ask Charlie for permission, too.

“I got in touch with Tiger and (Justin Thomas) was on the thread and they didn’t reply. I think maybe they thought we were teasing a little bit. I said, ‘Listen, Tiger, I need to make sure Charlie’s OK with Joe caddying for me in Atlanta’,” Couples told Golf Channel ahead of the tournament. “He got right back to me and said, ‘I just talked to him and he’s OK with it.’”

Did Joe Jr. reach out to Charlie too?

“I missed out on Charlie’s number as well, but looks like Fred took care of all the work, so, it’s all good,” Joe Jr. said.

The younger LaCava, who graduated from James Madison University, previously caddied during the summer at Winged Foot in Mamaroneck, New York, and still caddies there on weekends.

“I’ve known him since he was 4 years old,” Couples said. “I know his father like the back of my hand; he’s the spitting image of him. … it’s like the old days. I called Joe, told him to get a hotel near me and get a rental car. He’s picking me up and taking me to dinner. Nothing’s changing there.”

But for Joe Jr., this was the equivalent of getting promoted to the big leagues. After he walked the course, he called his dad, who gave him some simple advice.

“Always have a ball in the pocket, make sure the towel is always wet,” Joe Jr. said. “That’s about it.”

They made a good tandem. After a pair of 70s, Couples shot a final-round 6-under 66 to finish at 10-under 206, one shot short of tournament winner Steve Flesch. Still, his tie for second was good enough to earn a check for $132,000 and a pretty fat check for young Joseph.

It’s the year 2022 and a Couples/LaCava duo is making a Sunday charge.