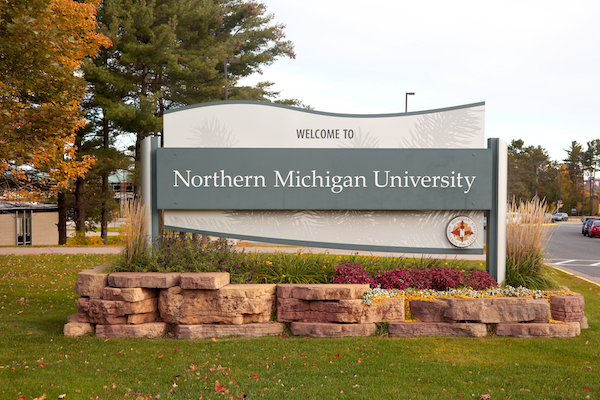 Following the suicide of a fellow Northern Michigan University student last month, Dominick Dotson sent a campus-wide survey seeking anonymous feedback about the adequacy of campus mental health resources. His email earned him a visit from campus police, an emergency suspension, and multiple student disciplinary charges. This heavy-handed response cannot stand at NMU — a public university bound by the First Amendment and until recently subject to a U.S. Department of Justice settlement on censoring mental health talk on campus.

Responding to NMU President Kerri Durnell Schuiling’s April 5 message highlighting university mental health services after the student’s death, Dotson asked university leaders about sending a survey requesting anonymous student feedback on these services. He was blocked at every turn by the student government, the IT department, and Assistant Vice President and Dean of Students Christine Greer, who incorrectly told him such a survey would require approval from the university’s Institutional Review Board — which oversees scientific research on human subjects.

Undaunted, Dotson discovered a way to email his survey to the student body using course registration numbers without accessing any individual student’s email address. On April 6 he did so, receiving more than 600 responses.

The next day, NMU issued Dotson an emergency suspension notice, hand-delivered by campus police, for “alleged Student Code violations.” The notice, signed by Greer, shut off Dotson’s email access and banned him from “all other university activities or privileges for which the student might otherwise be eligible.”

Greer claimed Dotson’s email caused “a disruption.” According to Greer, the threat that Dotson might continue to send additional emails constituted an “emergency situation” justifying his temporary suspension.

Student protests erupted upon hearing of his suspension.

NMU formally charged Dotson with violating the university’s Human Subjects in Research Policy and Acceptable Use Policy as well as failure to heed a direct order by sending his survey. He remains suspended pending a hearing on these charges.

Longtime FIRE readers may recall this isn’t the first time NMU has disciplined a student for discussing mental health. In one of FIRE’s most infamous cases, NMU was discovered in 2016 to have been systematically punishing students who spoke out about suicidal thoughts or self-harm. Rather than assisting students in crisis, NMU would threaten students about sharing “self-destructive” thoughts with others, warning that violations would result in severe discipline.

The university persisted in this practice even after FIRE called on the school to end the ban in 2016, culminating with a U.S. Department of Justice investigation and settlement legally requiring the university to finally end a number of allegedly unlawful and discriminatory practices. NMU also earned a spot on FIRE’s 2017 10 Worst Colleges for Free Speech list.

In this context, it’s no wonder Dotson’s suspension has struck a chord with the campus community. Student protests erupted upon hearing of his suspension. His punishment made the local news, prompted a petition with almost two thousands signatures, and inspired a powerful letter to the editor eviscerating NMU’s treatment of Dotson and student mental health issues.

FIRE also intervened. In our April 28 letter to NMU, we remind the university that not only did Dotson’s survey fail to violate any written policy, but the First Amendment protects its contents as pure speech squarely addressing an issue of profound importance to the campus community.

Dotson does not lose this protection simply because NMU leveled meritless disciplinary charges allegeding disruption and, bizarrely, institutional research violations. Contrary to what Greer told Dotston, his survey is not scientific research on human subjects that requires university approval. Federal regulatory guidance and university research policies make clear that official approval is required only for research defined as “systematic investigation including research development, testing and evaluation, designed to develop or contribute to generalizable knowledge.”

Dotson’s informal survey doesn’t approach this high bar. Dotson used no scientific method, did not seek to contribute to generalizable knowledge in any field of study, and his survey does not implicate whatsoever the kinds of ethical issues the research review board addresses. As such, he should not suffer for ignoring Greer’s misinterpretation of university policy.

Nor did the survey violate NMU’s Acceptable Use Policy, which covers university computers and virtual networks, as the university presents no evidence that Dotson violated student privacy or disrupted IT systems as prohibited by that policy. Given that Dotson’s survey violates no applicable policy, it constitutes expression on a matter of public concern meriting the highest level of First Amendment protection, and NMU may not punish it.

NMU knows it cannot censor students — particularly when they talk about mental health issues on campus.

Disturbingly, despite no evidence of disruption, weeks after sending his survey, Dotson remains under interim suspension — a drastic remedy that NMU’s student handbook reserves for severe threats to campus safety or ongoing interference with university operations. He is still cut off from campus life while NMU refuses to present evidence of anything resembling the exigent circumstances that could justify this extreme and continued deprivation of Dotson’s rights.

NMU knows it cannot censor students — particularly when they talk about mental health issues on campus. FIRE calls on NMU to immediately end Dotson’s temporary suspension, rescind the disciplinary charges against him, and commit — once and for all — to respecting students’ constitutional right to discuss mental health at NMU.

FIRE defends the rights of students and faculty members — no matter their views — at public and private universities and colleges in the United States. If you are a student or a faculty member facing investigation or punishment for your speech, submit your case to FIRE today. If you’re a faculty member at a public college or university, call the Faculty Legal Defense Fund 24-hour hotline at 254-500-FLDF (3533). If you’re a college journalist facing censorship or a media law question, call the Student Press Freedom Initiative 24-hour hotline at 717-734-SPFI (7734).