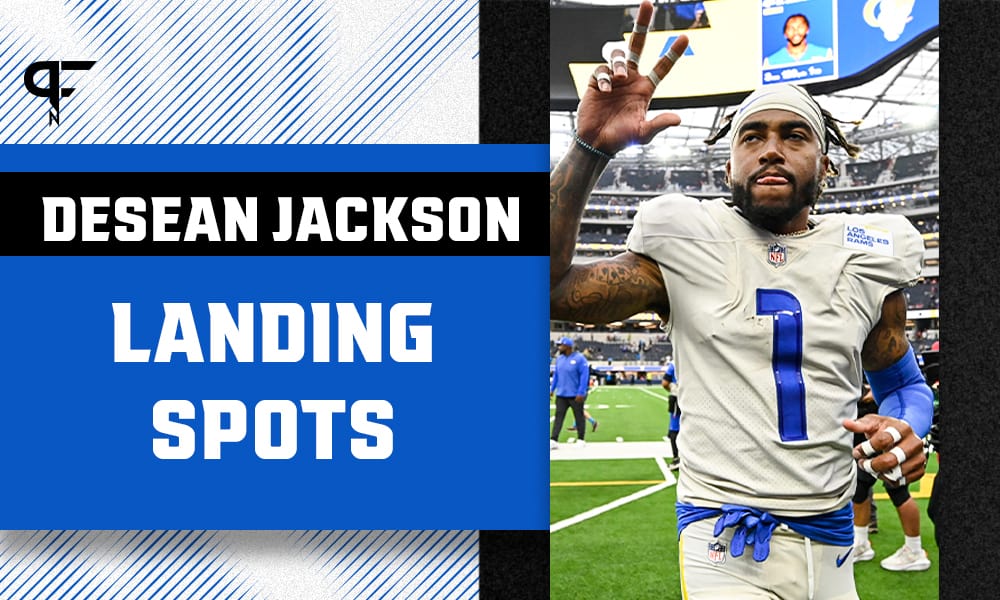 On Friday evening, NFL Network’s Ian Rapoport reported that WR DeSean Jackson and the Los Angeles Rams had mutually agreed to seek a trade. Which teams might be interested in trading for Jackson ahead of the 2021 NFL trade deadline?

Which contending teams might be interested in adding Jackson before the deadline? Let’s look at why teams such as the Browns, Packers, Chiefs, Titans, and Chargers might make the most sense.

The Cleveland Browns have struggled to get any consistency from their wide receiver group this year. Now, while Jackson would not be the safe pair of hands they need, his speed might just open up the field for the likes of Odell Beckham Jr. and Jarvis Landry.

Adding Jackson would also potentially help the run game. It becomes extremely tough to load the box against the run when the threat of Jackson going deep looms. Imagine trying to decide how to defend a combination of Jackson, Beckham, Landry, and Nick Chubb on any given play.

The Packers managed to find plays from their WR depth against the Cardinals in Week 8. However, they really need another playmaker they can trust if this team is believed to be a Super Bowl contender. In Davante Adams and Randall Cobb, they have a nice combination of route running and good hands. However, neither receiver is known as a true deep threat.

When Green Bay’s offense was at its best with Aaron Rodgers, it’s been with a player who can stretch the field. Jackson could be precisely that option. His 8 receptions as a Ram have yielded an average of 27.6 yards per reception, with a long reception of 75 yards. With the threat of Jackson blowing the top off the defense, coordinators will have a harder time trying to shut Adams down with bracket coverage.

This is perhaps more a dream of mine than a realistic trade. In Tyreek Hill, the Chiefs already have a fantastic speedster. However, what they really need to add is a solid receiver with safe hands. Still, Jackson lining up alongside the speed of Hill and Mecole Hardman would terrify opposing defenses on every single down. Just imagine the space Travis Kelce would have to work with over the middle.

The Chargers just feel like they are one playmaker short. They have Keenan Allen, who is among the best route runners in the league. Mike Williams is great when it comes to contested-catch situations. However, stretching the field is what they really lack, and Jackson can do that. It would make a lot of sense if Jackson stays in Los Angeles, as he could be the missing piece this Chargers offense needs.

Julio Jones has been fine since arriving in Tennessee, but nothing more. Add in the woes with his hamstring, and the Titans could really use another big-time playmaker. A.J. Brown is a fantastic receiver, but without Jones, defenses can key in on stopping him in the passing game. That would not be able to happen if Jackson was lined up opposite him.

Additionally, much like with the Browns, adding Jackson helps the run game. Teams will have to commit to keeping a defender deep to protect against Jackson’s speed. That could prevent them from regularly loading seven or eight men in the box and give Derrick Henry more room to work.

Jackson’s contract is conducive to a trade

Jackson is on just a one-year contract, which is music to any contender’s ears. His salary for the year is $2.75 million, and he has $514,706 in per-game active bonuses. The salary is fully guaranteed, so any team trading for him would at the very least be committing to paying the rest of it, regardless of performance.