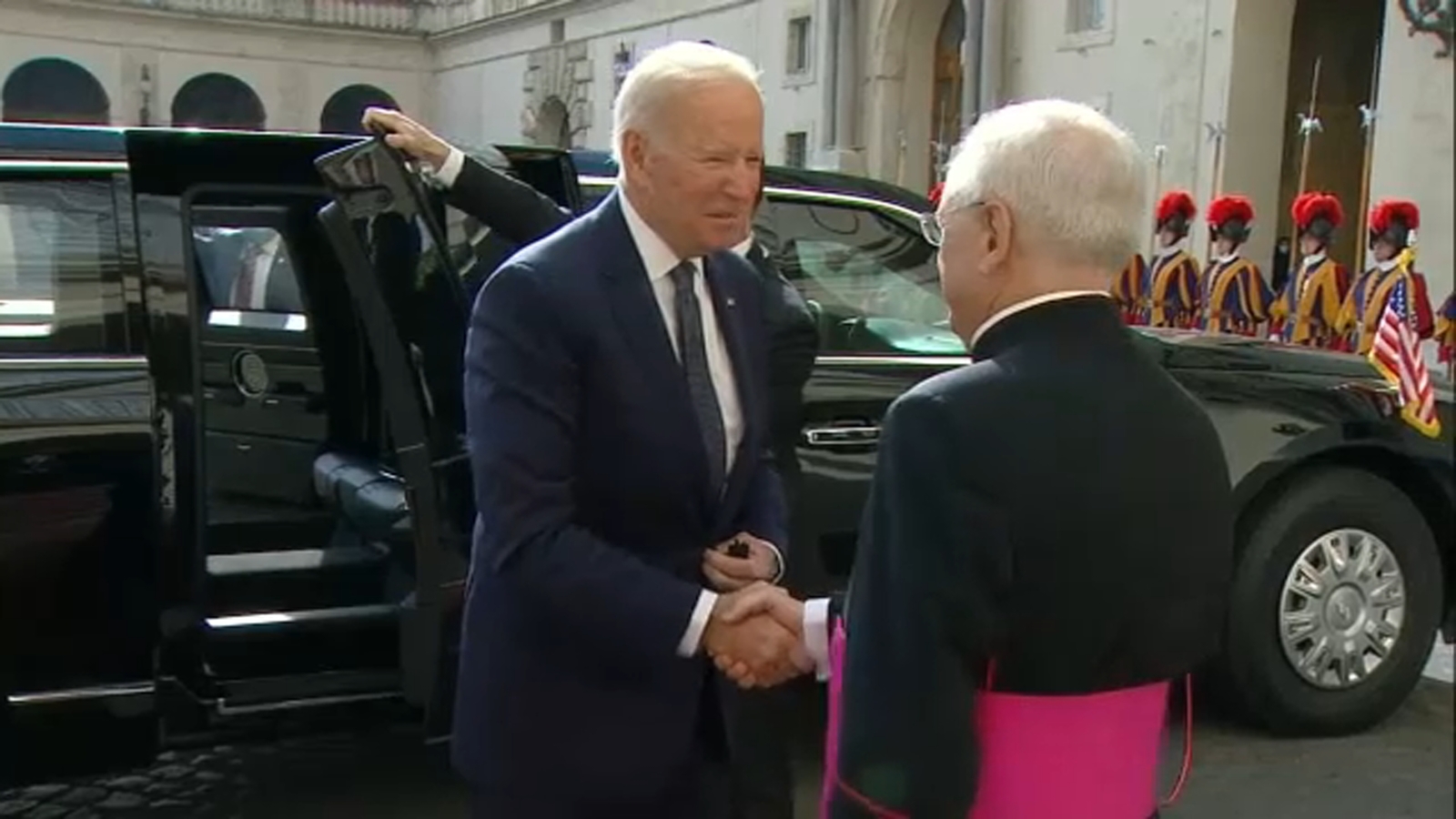 The president takes pride in his Catholic faith, using it as moral guidepost to shape many of his social and economic policies. Biden wears a rosary and frequently attends Mass, yet his support for abortion rights and same-sex marriage has put him at odds with many U.S. bishops, some of whom have suggested he should be denied Communion.

Biden and his wife, Jill, arrived at the Vatican in an unusually long motorcade of more than 80 vehicles, owing in part to Italian COVID-19 restrictions on the number of people sharing a car.

A dozen Swiss Guards in their blue and gold striped uniforms and red-plumed halberds stood at attention in the San Damaso courtyard awaiting Biden’s arrival. Biden was being received by Monsignor Leonardo Sapienza, who runs the papal household, and then greeted one by one the papal ushers, or the papal gentlemen, who lined up in the courtyard.

“It’s good to be back,” Biden said as he shook the hand of one of them. “I’m Jill’s husband,” he said to another, before being escorted into the frescoed Apostolic Palace and taken upstairs to the pope’s private library.

No live pictures or video of the meeting was expected, due to last-minute Vatican restrictions no press access.

White House press secretary Jen Psaki, in previewing the visit, said she expected a “warm and constructive dialogue” between the two leaders.

“There’s a great deal of agreement and overlap with the president and Pope Francis on a range of issues: poverty, combating the climate crisis, ending the COVID-19 pandemic,” Psaki said. “These are all hugely important, impactful issues that will be the centerpiece of what their discussion is when they meet.”

National security adviser Jake Sullivan said the president and pontiff would meet privately, then hold talks with expanded delegations. Biden is visiting Rome and then Glasgow, Scotland, for back-to-back summits, first a gathering for leaders of Group of 20 leading and developing nations and then a global climate conference.

As only the second Catholic president after John F. Kennedy, Biden has made his audience with the pope a clear priority. It will be his first scheduled meeting on a five-day trip abroad and his wife, Jill, will also attend. Biden and Francis have previously met three times but Friday’s encounter will be their first since Biden became president this year.

Following the papal meeting, Biden will meet separately Friday with Group of 20 summit hosts Italian President Sergio Mattarella and Italian Prime Minister Mario Draghi. He will end the day by meeting with French President Emmanuel Macron, part of an effort to mend relations with France after the U.S. and U.K. decided to provide nuclear-powered submarines to Australia, scotching an existing French contract.

Biden’s meeting with Pope Francis generated some controversy in advance as the Vatican on Thursday abruptly canceled plans to broadcast the meeting with Biden live and denied press access. Vatican spokesman Matteo Bruni said the revised television plan reflected the virus protocol for all heads of state audiences, though he didn’t say why more robust live TV coverage had been initially scheduled and then canceled.

There will be no live broadcast or independent photographs of Biden greeting Francis in the palace Throne Room, nor live footage of the two leaders sitting down to begin their conversation in Francis’ library.

The Vatican said it would provide edited footage of the encounter after the fact to accredited media.

A live broadcast was particularly important because the Vatican has barred independent photographers and journalists from papal audiences with leaders since early 2020 due to the coronavirus, even though external news media are allowed into other papal events.

That decision comes as U.S. bishops are scheduled to meet in roughly three weeks in Baltimore for their annual fall convention. Among the agenda items for that convention is an effort by conservatives to disqualify Biden from receiving Communion. Any document emerging from the event is unlikely to single out the president by name, but he still could face some form of rebuke.

Francis has stressed that he will not reject political leaders who support abortion rights, though Catholic policy allows individual bishops to choose whether to prevent people from taking Communion.

Burke didn’t cite Biden by name, but said such Catholic politicians were causing grave scandal to the faithful since church law says someone who is “obstinately persevering in manifest grave sin” should not be admitted to Communion.

Catholic politicians who support abortion rights “have, in fact, contributed in a significant way to the consolidation of a culture of death in the United States, in which procured abortion is simply a fact of daily life,” Burke wrote.

Over the years, Vatican meetings between presidents and popes have had their share of awkward moments.

President Ronald Reagan had trouble keeping his eyes open on his first visit to the Vatican in 1982. When George W. Bush met with Pope Benedict XVI, his overly casual behavior was noted by many Italians and Vatican watchers as he addressed the pope as “sir,” rather than the customary “your holiness,” and as he leaned far back in his chair. When Donald Trump met in 2017 with Francis, with whom the president had a prickly relationship, photos showed a stone-faced Francis standing next to a grinning Trump.

President Biden has long cast his faith as a cornerstone of his identity, writing in his 2007 memoir “Promises to Keep” that Catholicism gave him a sense “of self, of family, of community, of the wider world.” He admits to becoming angry with God after the death of his first wife and baby daughter in a 1972 traffic accident, but Biden said he never doubted God’s existence.

In a 2007 interview with The Christian Science Monitor, Biden said he believes his faith is universal enough to accept those with differing viewpoints.

Copyright © 2021 by The Associated Press. All Rights Reserved.

PrevPreviousAmericans Ready To Gather, Travel, And Celebrate The Holidays Again – CBS Pittsburgh
NextSchool Board Chaos: Tensions Continue To Rise At Meetings Across U.S.Next