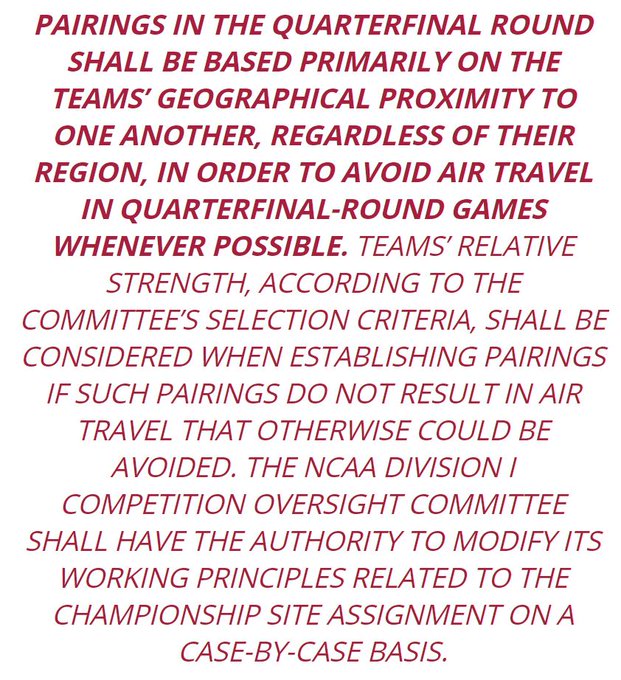 Phase one of the report came out in early August and focused specifically on men’s and women’s basketball. Monday’s report was the second phase and detailed inequities across all other NCAA-sponsored sports.

The 154 page report can be found here and it should be required reading for anyone involved in sports. The majority of the report is a breakdown of inequities in individual sports, but the opening 60 pages do a stellar job of showing how the problems shown therein are systemic, problematic and fixable.

This report contained no information that was surprising or groundbreaking to anyone that has spent time around the NCAA and in particular, women’s college hockey. The inequities are not new. While helpful to have the information gathered and reported from an outside source and freely available to the general public, it also does not matter if the report does not incite major change.

Despite being a non-profit that is supposed to be focused on the student-athlete experience, the report found “woven into the fabric of the NCAA is a pressure to increase revenue to maximize funding distributions to the membership.”

“Phase II of our review has shown that this same pressure has led the NCAA to invest more—and in some instances considerably more—in those championships that it views as already or potentially revenue-producing, while minimizing spending for other championships. Because the mere handful of championships that the NCAA views as revenue-producing are exclusively men’s championships—Division I baseball, men’s basketball, men’s ice hockey, men’s lacrosse and wrestling—this has significant implications for efforts to achieve gender equity between the men’s and women’s championships in those sports. The NCAA’s simultaneous failure to put in place systems to identify, prevent, and address gender inequities across its championships has allowed gender disparities in these and other sports to persist for too long.”

The study looked at spending, marketing, fan engagement and corporate sponsorships both men’s and women’s championships within a single sport and found a number of issues. Achieving gender equity does not mean that the NCAA will spend the same amount of money on all players, but the report found that the NCAA has no process for monitoring if the difference in spending per athlete is equitable. In hockey, the report found, the NCAA spent $9,805 per student-athlete at the men’s hockey championship and $3,421 per student-athlete at the women’s in 2019.

“The NCAA’s continued investment in one gender’s championship over the other’s can perpetuate disparities by limiting the less-resourced championship’s capacity for growth and development,” the report said.

The hockey-specific case study section opens with this: “The Division I Men’s Ice Hockey Championship provides a markedly different experience for its student-athletes than its counterpart, the NC Women’s Ice Hockey Championship. The men’s championship, which is a much larger event involving twice as many teams and four-to-five times as many fans, benefits from greater promotion, more extensive television coverage, and a more professional ‘look and feel.’ One stakeholder with experience at both the men’s and women’s tournaments observed, ‘It’s really like they’re different sports.’”

“In this way, the ice hockey championships are a stark example of how the NCAA’s broader decision to provide greater support to more revenue-producing championships has a gender equity impact on the student-athlete experience. As one stakeholder put it, ‘[The NCAA] uses its decision-making and negotiating power to bolster men’s hockey events, while squandering opportunities to support women’s hockey in ways that would both help the sport and itself.’”

Some of the biggest takeaways:

A longtime major point of concern and contention in women’s college hockey is how limiting travel costs is one of the primary criteria used during tournament field selection. The words “bracket integrity” do not appear anywhere in the manual for selecting teams. (My Twitter thread on this is here).

It seems like a good time to remind you that the primary goal of the NCAA DI Women’s Hockey Tournament Committee/Seeding is to not spend money. https://t.co/AZtMoEFgJD

The men’s championship manual directs the selection committee to maximize “competitive equity, financial success and the likelihood of a playoff-type atmosphere at each regional site.” It makes no mention of cost and instead, specifies that “the integrity of the bracket will be protected.”

“As one coach observed, ‘On the men’s side it’s about putting together the best field. On the women’s it’s about saving money and avoiding flights.”’Stakeholders raised the concern that this difference in seeding impacts the competitiveness of the women’s tournament, making it less exciting, and potentially stunting the growth of the sport.”

This report specifically cites travel and accommodates as one of the main guiding principles the NCAA must apply in order to assure gender equity.

“The type and quality of transportation to championships should be substantially the same, as should the degree to which travel considerations are permitted to impact the brackets.”

The report goes into detail about the ways broadcasts, branding, signage, corporate sponsorships and fan festivals affect the watch-ability and popularity of a particular championship.

While the NCAA has recently created separate Twitter accounts for men’s and women’s volleyball, they continue to use a single account for both men’s and women’s hockey and the coverage there is heavily skewed towards the men’s game.

The split in coverage has improved in recent years, but as I detailed on my own Twitter, the @ncaaicehockey twitter handle has long treated the woman’s game as an afterthought.

In response to the viral women’s basketball complaints, the NCAA conducted a self-review of gender equity among all Championship staff. A number of small changes were implemented in sports like lacrosse and softball, but in a sport like hockey, where the equivalent of two-thirds of one full-time employee was assigned and any NCAA presence at the women’s NCAA tournament was not immediately apparent to those of us who were there, it’s difficult to feel like that review would be at all beneficial.

Additionally, “NCAA Championships staff explained that this review was not comprehensive  and was done quickly during the championship season. The NCAA did not create any process to track issues that were identified but not resolved, or to maintain a list of specific changes that resulted from the review.”

This past summer, the NC Women’s Ice Hockey Committee requested a bracket expansion from eight to 10 teams. In September 2021, the Competition Oversight  Committee noted that “[w]hile the committee supports the merits of the proposal . . . it agreed to table the matter until the next opportunity to fund it.”

The difference in how tournament selection takes place is focused on as part of this study.

This whole project was kicked off by women’s basketball players taking to social media to show the inequities they were experiencing at their national tournament. They were loud, gathered support and made it so the NCAA could not ignore what was happening.

Student-athletes have no choice but to play under the auspices of the NCAA and shouldn’t have had to be the ones that hold them accountable for providing an equitable experience. This report is a start at identifying the issues – especially since the report showed how badly the NCAA handled internal reviews of these same issues – but it’s time for the NCAA to make broad changes and a commitment to transparency in how and when those changes are coming.

The NCAA’s Board of Governor’s statement in response to the publishing of the study made broad statements in support of equity, but there has been little said about concrete plans or timelines as to how and when the recommendations from the report will be enacted. Until there is a clear outline of how the NCAA will close the gaps laid out in the report, players, fans, programs and the media have to continue to put pressure on them to not let this report and its contents be ignored.