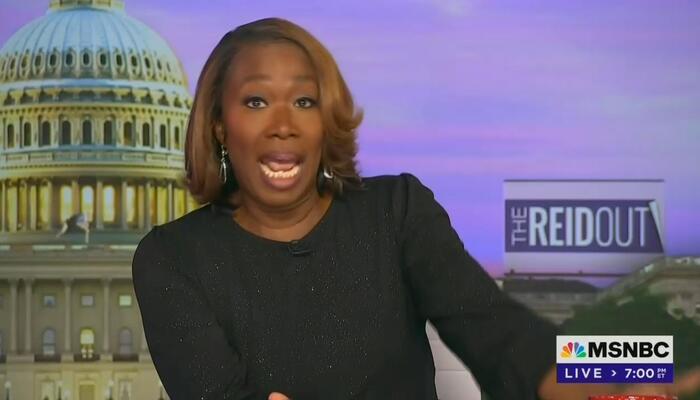 MSNBC’s The ReidOut host Joy Reid has made the demonization and other-izing of conservatives and Republicans her cause celebre. So, for Thursday’s installment, she and a team of guests paint non-leftists as supporters of being terrorists using COVID to commit mass murder and having a “right” to physical harm school board members while opposing “history and democracy” and drawing in supporters with pitches that look like “ISIS recruitment videos.”

And whom did Reid pin as the ring leaders of such terrorist movement that must be put down? Fox News host Tucker Carlson, Senator Ted Cruz (R-TX), and Virginia Republican gubernatorial candidate Glenn Youngkin.

Reid immediately launched into a tirade off the top about how, “if you took a snapshot of the country,” you’d see the American right “tak[ing] aim at every civic and cultural institution, from whether we live or die from Covid to our schools and history and democracy itself, banning books, senators defending Nazi salutes and unhinged anti-vax protests at school boards.”

She also spoke out against Carlson’s upcoming documentary series on January 6 and called it proof he’s “going full Alex Jones,” which was ironic considering the fact that, as NewsBusters readers will realize, she herself has served as perhaps the more fitting embodiment of Jones with nightly conspiracy theories.

Teasing what would be a rant about Carlson’s special, Reid admittedly tried to strike fear in her audience, likely trying to cause viewers to fear and hate anyone and everyone they know who votes GOP, whether it be colleagues, family members, or neighbors:

It’s almost time for Halloween and there is a monster in our midst. Far-right elements of the Republican Party creeping out of the shadows and into the political mainstream. Are you frightened yet? You should be.

Reid continued using Carlson’s controversial special as a foil for any and all conservatives and their persuasions: “Tucker is the main actor teaching the right how to normalize fascism, white nationalism, and white supremacy and now he is priming easily at least a third of this country’s adult population to go all-in on this radical rewrite of January 6.”

She went on to have a second segment using January 6 as proof of what the right would do with any issue, including education, implying that Youngkin supporters want to murder school board members (click “expand”):

And up next, they’re not just saying the quiet part out loud anymore. They are shouting it from the freaking rooftops. More on the GOP’s embrace of violent ultra-nationalism. After the break. Stay with us.

One of the guests on Tuckums’s show last night shortly after he unveiled his propaganda to rewrite the January 6 insurrection was Glenn Youngkin, the Republican candidate for governor of Virginia. The new poster child for the Republicans’ current twisted priority of banning books when they’re not trying to reenact Fahrenheit 451. Republicans are continuing to lose their minds over the Justice Department’s effort to protect school board officials threatened with violence over race-conscious lessons and mask rules. At a Senate hearing with Attorney General Merrick Garland, perennial Absolute Worst candidate Ted Cruz once again proved there is no bottom.

Congressman and Chinese honeypot lover Eric Swalwell (D-CA) was happy to oblige, stating without evidence that Republicans are “defending the violence that many are taking against school board members” and, worse yet, believe they “not only have a right to go to the school board, but they have a right to go there and incite and threaten violence against people making decisions about our kids’ education and Ted Cruz is cool with it.”

Just casually accusing anyone with an R next to their name of supporting murder. Cool, cool.

Reid went to American University professor Cynthia Miller-Idriss with more grievances, saying that Youngkin and his party are “normalizing and rubbing elbows with open white nationalism, white replacement theory, some really dangerous ideologies that are designed to whip up, you know, particularly white men” to do harm (click “expand”):

REID: When you have norm core supposedly Republicans like Glenn Youngkin, who is running in Virginia, people like Ted Cruz who used to be, you know ‘I’m a fiscal conservative., That used to be his thing. ‘I’m a constitutional conservative.’ But they’re now normalizing and rubbing elbows with open white nationalism, white replacement theory, some really dangerous ideologies that are designed to whip up, you know, particularly white men and working class white men, non-college white men. And then you have one of those working class white men, or we don’t know his class or whatever show up at an event and say when do we get to start killing, I don’t know why anybody is surprised, but are you surprised that’s where we are?

MILLER-IDRISS: I’m not surprised anymore and thanks for having me back. It’s good to be here. Good to be here with you both. You know, I think what we’re seeing here is under the guise of free speech, a lot of the veneer of kind of respectability that — that — that mainstream politicians and — and — and mainstream news platforms carry, you have actually now Holocaust minimization happening, and you have real mainstreaming and legitimization of very extreme kinds of concepts.

Speaking of priming, Reid kept priming her viewers with more conspiracies about how the right was increasingly in control of “determin[ing] who wins elections” and led by “the farthest right people.”

Swalwell agreed and ironically said that, if someone at MSNBC paid homage to al-Qaeda, Reid would do the right thing and “resign.”

Before going to Miller-Idriss to close things out, Reid said Carlson’s video to inflame the right was similar to “these ISIS recruitment videos” and behavior from “terrorists” that she “used to” see in that “they showed lots of action…and they were designed to draw a certain kind of man, a sort of incel-type of young man who was frustrated by whatever was happening in his life and get them to come for the action.”

Reid’s dangerous characterization of over 70 million Americans as terrorists was made possible thanks to the endorsement and support of advertisers such as Liberty Mutual, Safelite, Tractor Supply Co., and Uber Eats. Follow the links to see their contact information at the MRC’s Conservatives Fight Back page.

To see the relevant MSNBC transcript from October 28, click here.