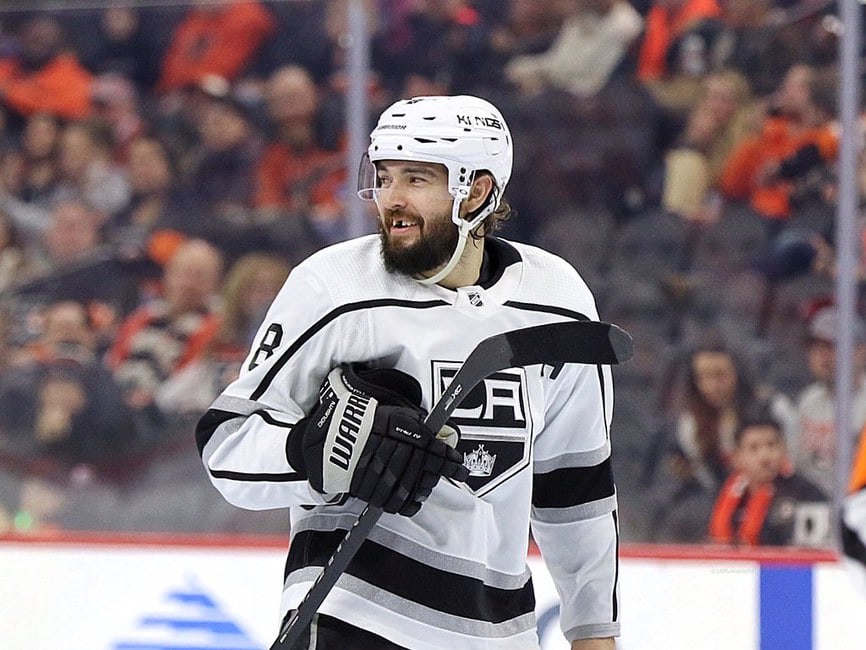 In this edition of Los Angeles Kings News & Rumors, I will be discussing the severity of Drew Doughty and Sean Walker’s injuries and what the Kings can do to deal with losing these two. I will also be discussing some of general manager Rob Blake’s comments about the direction the team will take after these two big blows and the return of a few players.

On Wednesday, Blake held a media meeting where he revealed the extent of Doughty and Walker’s injuries. Doughty will be out an estimated six weeks with a bruised right knee, and Walker will miss the remainder of the season with a torn MCL and ACL. This is a devastating blow for the Kings, as they will be without two of their top three right defensemen for at least two months. It also leaves them with little offensive spark from the back end. Doughty and Walker were the team’s only puck-movers on the blue line, so losing them means offense coming from the back end will be almost non-existent, adding to the team’s scoring problems.

Walker and Doughty led the team’s defensemen in points last season with 18 and 34 points, respectively, with Mikey Anderson as the only other defenseman to post more than 10 points, with 11. It’s also disastrous for the team’s power play, as Doughty quarterbacked the first unit and Walker quarterbacked the second unit. Without Doughty, the top unit has looked terrible, and I fear losing Walker will have a similar effect on the second unit. The team had already recalled Austin Strand to replace Doughty and have now recalled Kale Clague to replace Walker. This is a huge chance for Clague and Strand, as they have the chance to make the most of a bad situation and prove they deserve to stay on this roster long term.

Related: Kings Should Move Gabe Vilardi to the Wing

Several fans want the team to go out and acquire a defenseman to help bolster the blue line. It appears that, for now, the team won’t be making any moves and will be searching for answers within the organization. If a trade does happen, it seems like it would be a small trade and not one that brings in a big-name player. As Kings insider John Hoven explained, the team’s current cap situation makes any trade for a big-time defenseman very difficult. The idea of reacquiring Christian Wolanin was even mentioned, as the Kings didn’t want to lose him in the first place.

There have also been questions about if the team will pivot its goals for the season after this heavy blow. The goal heading into the season was to turn the page on the rebuild and make a push for playoffs, but after a 1-4-1 start and these injuries, some fans expect the team to head back into rebuild mode. But, according to The Athletic’s Lisa Dillman, the team is sticking with its preseason plans.

“Blake said no.” (When asked if injuries change expectations for the season.)

“The general rule of thumb is to wait six weeks before you get a true sense of the direction your team is trending, and re-evaluate at that poin. The Kings have a little more than four weeks — which includes 13 more games — until the six-week mark at Thanksgiving.”

“If it turnds out that Doughty’s and Walker’s absences undermine whatever success the team may have this season, then the time to look at getting assets back for players the Kings might want to part with is closer to the trade deadline.”

(From “Drew Doughty and Sean Walker are out, but the Kings aren’t ready to pivot from their season plan,” Lisa Dillman, The Athletic)

It’s clear we won’t see any reactionary decisions from the front office. It appears the organization is taking a “wait and see” approach with this situation. Maybe they are confident in the team’s depth to carry them, at least until Doughty comes back. Or maybe they are exploring a possible small trade, like the one for Wolanin. I think the upcoming five-game homestand will play a massive role in where this season goes. I believe the team will wait until around Thanksgiving to make any definitive decision, as Dillman predicts, but a poor performance during this homestand would give the team a massive uphill battle for the rest of the season.

Most of the news surrounding the Kings’ injury situation has been bad, obviously, but there has been some good news recently. Forward Brendan Lemieux has been activated off the COVID protocol list, while Lias Andersson and Andreas Athanasiou have rejoined the team’s practices. Andersson seems closer to returning, as he participated in full during Wednesday’s practice. Athanasiou is still in a red, non-contact jersey, but seeing him return to team practices in any capacity is a positive.

For a team desperately in need of goals, seeing Athanasiou return, who was tied for the team lead in even-strength goals, will be huge. Where he fits into the lineup is unknown, but adding a player with his speed and finishing abilities could be huge for the team. Andersson will also be a big piece returning. His chemistry with Gabe Vilardi and Vladimir Tkachev in preseason left fans very excited for the third line, but Andersson’s injury has meant we’ve yet to see it during the regular season. Athanasiou and Andersson’s return won’t fix the team’s scoring problems alone, but adding two talented players back into the lineup should have an impact and add some much-needed scoring depth. Hopefully, we see Andersson back within the next few games and Athanasiou back in the next few weeks.

My name is Austin Stanovich, as a lifelong player and fan I’m hoping to bring my own unique perspective on the hockey world, specifically covering the Los Angeles Kings. As a SoCal native I grew up a Kings fan, and after graduating from Long Beach State in 2020 I’ve joined  The Hockey Writers crew as a columnist for the Kings.