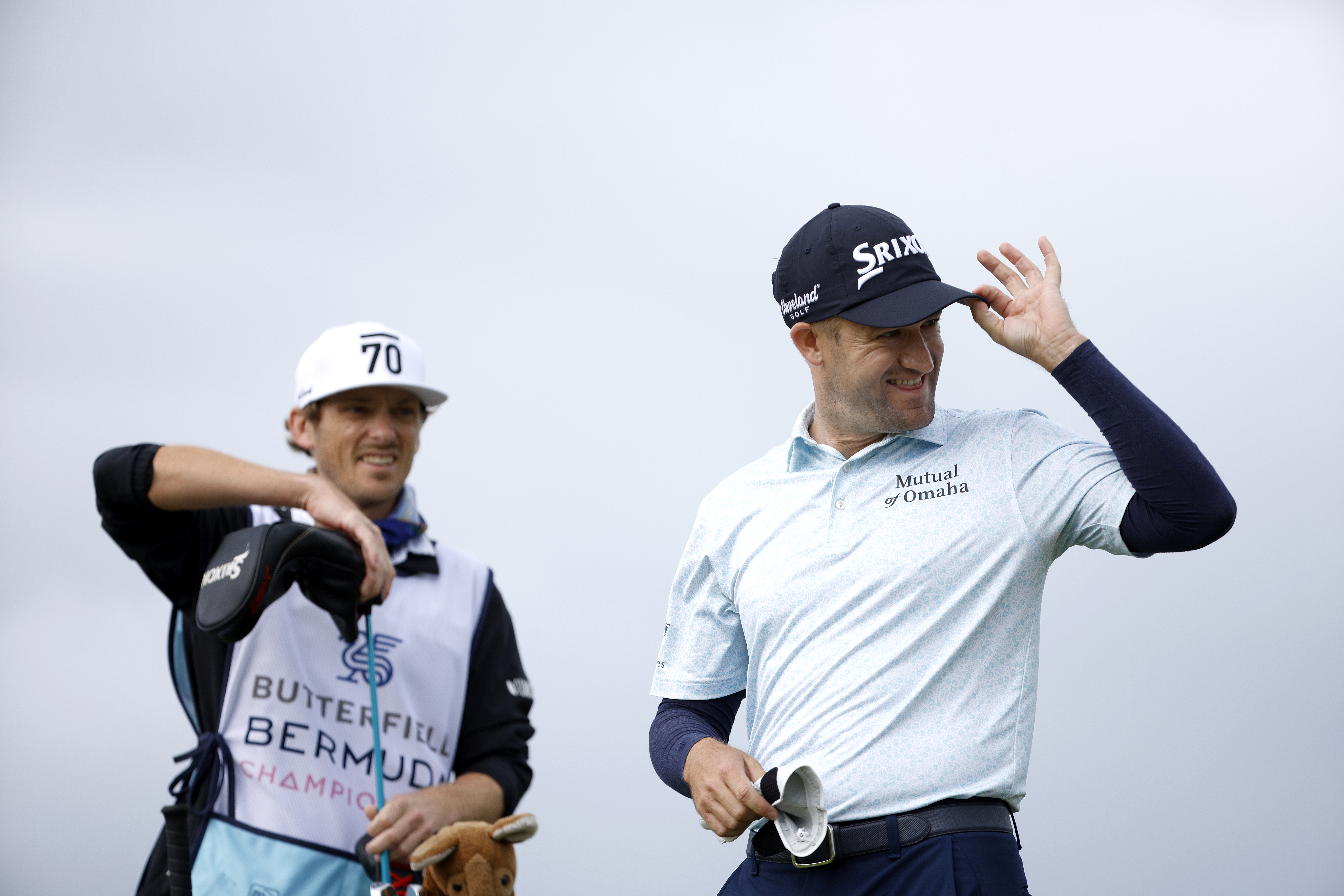 The scoreboards all say that Brandon Hagy, who played in the afternoon wave, is the leader after the first round of the Butterfield Bermuda Championship, but no one had a morning quite like Mother Nature.

Port Royal Golf Club in Southampton, Bermuda, the shortest course on the PGA Tour at 6,828 yards, turns nasty when the wind blows in from the Atlantic Ocean and the sun gives way to rain. On Thursday morning, Port Royal rolled its shoulders and stirred awake, an unpleasant combination of howling winds, gusting to 35 miles per hour, and sheets of sideways rain, which combined to send scores ballooning.

“It was a day to kind of survive and I’m glad I kind of hung in there,” said Scotland’s Russell Knox, who knows a thing or two about playing in inclement weather, and signed for 1-over 72.

Russell Knox of Scotland talks with his caddie, former PGA Tour pro Willy Wilcox, while waiting to tee off on the ninth hole of the first round of the Butterfield Bermuda Championship at Port Royal Golf Course in Southampton. (Photo by Cliff Hawkins/Getty Images)

On Tuesday, England’s Matt Fitzpatrick said he welcomed the wind, but he didn’t have a day like this in mind.

“This is the hardest wind I’ve ever played in. You see winds like this, but normally you don’t play in them,” he said. “People are going to laugh at this because they probably think it’s my normal tee shot, but anyway, I ripped it (on No. 7) and it went 245. I think my season average last year was like 295. Just shows you how strong it is.”

A different type of golf – and temperament – was required to keep the ball flight low.

“We were three, four clubs up every time on a yardage just trying to chip everything in there,” Fitzpatrick said. “There was just a couple that I maybe didn’t quite strike very well and they just ballooned off into no-man’s land.”

Getting to the green was only half the battle.

“Five feet for birdie and a foot and a half for par and, yeah, I was scared to death of it,” Fitzpatrick said of his putting adventures at the ninth hole. “I honestly didn’t know what to do, I’ve never had a putt like it.”

Knox grew up playing in a wee bit of wind and rain in Scotland, but even he conceded that the conditions in Bermuda were trying at times. 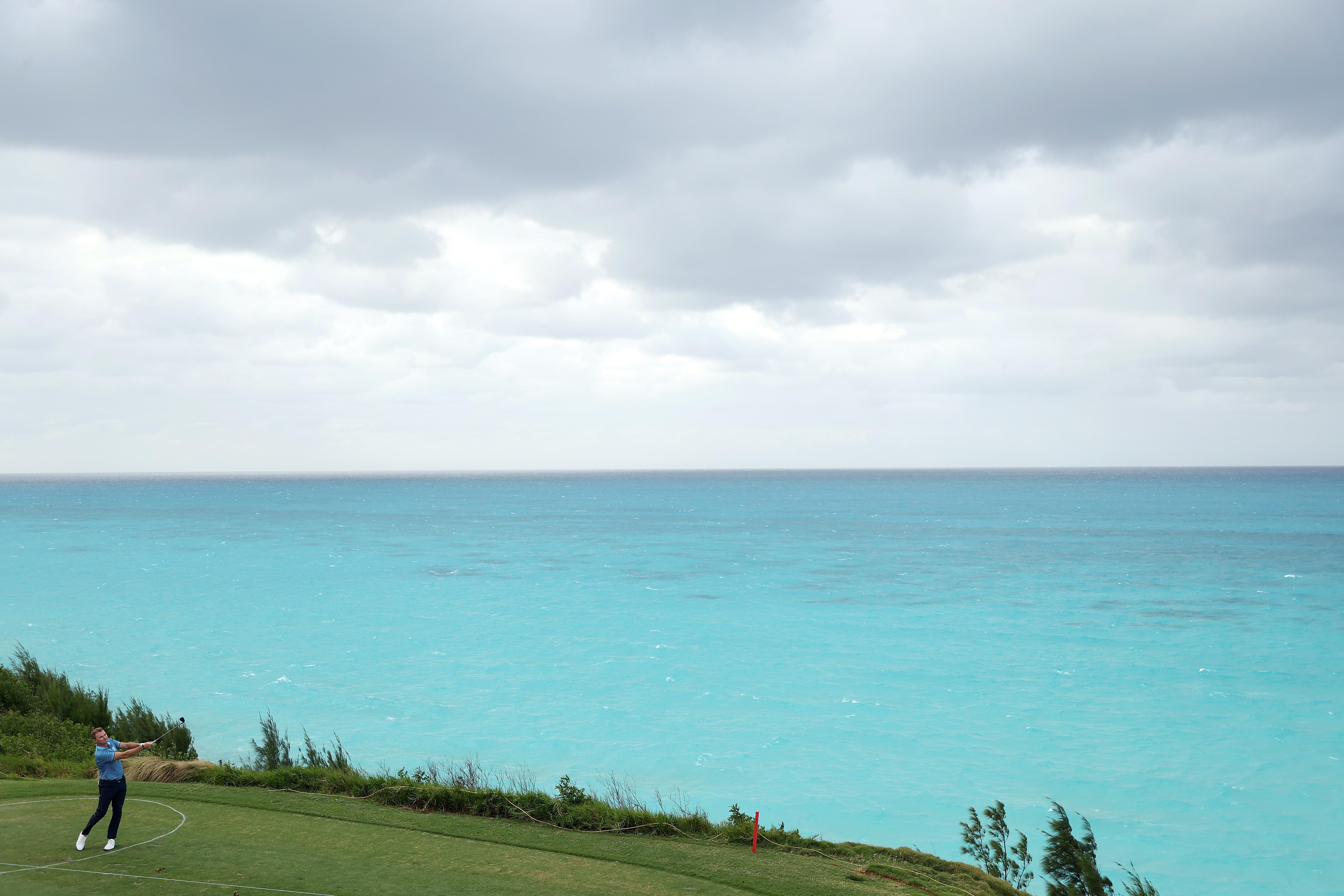 Defending champion Brian Gay plays a shot from the drop zone on the 16th hole during the first round of the 2021 Butterfield Bermuda Championship at Port Royal Golf Course in Southampton, Bermuda. (Photo by Cliff Hawkins/Getty Images)

Knox typically thrives in windy conditions, noting it brings out his creativity and “kind of activates something in my brain which I think makes me a better player.” But the conditions in Bermuda became so extreme for a stretch that the course was unplayable.

“No. 9, we were on the front edge of the green there and I’ve never experienced wind that strong, I think, on a golf course. I mean, we were down on the ground holding an umbrella. My fingers were like cramping I’m holding on so tight and it was pouring rain as hard as it’s ever rained,” Knox said.

Competitors in the afternoon fared better as the rain halted, the wind died down and sunshine burst through the clouds. No one took advantage of the improved conditions better than Hagy, who rolled in nine birdies, including four in a row starting at No. 11, and Ramey, who played bogey-free, to shoot 6-under 65s, one stroke better than Vincent Whaley and two strokes ahead of six other golfers when play was suspended due to darkness. Among those still on the course included local club pro Brian Morris, who has Stage IV cancer and is playing in his first PGA Tour event on a sponsor invitation. He struggled, playing his first 15 holes in 15 over.

“I was walking down the 10th fairway, our first hole, and I saw 2 under was leading,” Hagy recalled. “I was like, ‘Wow, it’s playing difficult.’ I think it laid down a little bit for us, but it was still pretty stout.”

Despite getting the worst of the weather, Knox, who played alongside friends Austin Cook and Ryan Armour, was able to find some sunshine on a gloomy day.

“It was a nice day to experience the wildness with those guys,” Knox said. “Honestly, it was a day that anyone out there will never forget.”