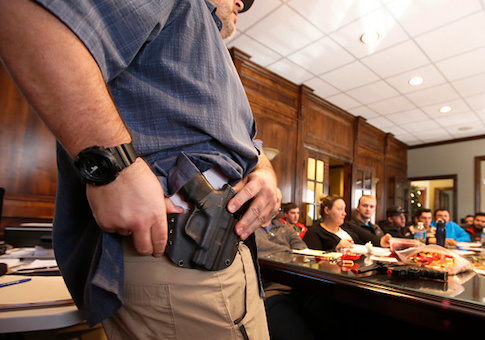 Coalition is backing a Supreme Court challenge to the rules

A coalition of black lawyers says New York state’s concealed carry restrictions are racist, and they are backing a historic challenge to the restrictions the Supreme Court will hear on Nov. 3.

The New York State Rifle and Pistol Association is pressing the High Court to strike down the rules, which require residents prove “a special need for self-protection” in order to obtain a concealed carry permit. Black Attorneys of Legal Aid filed an amicus brief on behalf of 10 New York public defender offices and 3 legal assistance groups complementing that effort, arguing the rule has racist origins and continuing discriminatory effects.

“We represent hundreds of indigent people whom New York criminally charges for exercising their right to keep and bear arms,” the brief reads. “Virtually all our clients … are Black or Hispanic. And that is no accident. New York enacted its firearm licensing requirements to criminalize gun ownership by racial and ethnic minorities. That remains the effect of its enforcement by police and prosecutors today.”

The gun rights plaintiffs say New York’s “proper cause” requirement makes it virtually impossible for all but a favored few—former police officers or celebrities for example—to obtain a permit. They say that concealed carry is a functional nullity in New York state.

About 10 states have similar laws, all of which could be called into question depending on the scope of the Court’s decision. The justices have never recognized a right to carry for self-defense outside the home, meaning the New York case could be of enormous consequence.

The burdens on access are especially acute for minority applicants, the legal aid brief says. In the first place, many local law enforcement agencies—who handle licensing under New York’s system—impose fees that price out indigent applicants. For example, the New York Police Department charges more than $400 in fees to process a concealed carry application.

According to the brief, a person arrested for carrying a concealed weapon without a license in New York state is usually charged with second degree criminal possession of a weapon, which is a violent felony. The lightest available penalty is two years in prison followed by two years of supervised release. Minorities make up a disproportionate share of such defendants, the brief says.

“The penal consequences of New York’s licensing requirements are reflected in today’s data from the criminal legal system,” the brief reads. “In 2020, while Black people made up 18 percent of New York’s population, they accounted for 78 percent of the state’s felony gun possession cases.”

The brief included several representative cases to underline the point. One involved a Texas military veteran, identified by the pseudonym Jasmine Phillips, who was arrested on a gun charge when she was driving her children to New York to visit their father. Acting on a tip, New York City police stopped her car, searched it, and found a firearm. Phillips obtained the gun legally and lawfully possessed it in Texas.

The case against Phillips was diverted and ultimately dismissed, according to the brief, but the arrest disrupted her life profoundly. Aside from her pretrial incarceration at Rikers Island, social services intervened after the arrest and opened a child neglect proceeding. A judge ultimately ruled against her in an ensuing child custody dispute, citing the felony arrest. The New York case also formed the basis of her eviction from her rental property in Texas.

The Supreme Court will hear arguments in the case, No. 20-843 New York State Rifle & Pistol Association v. Bruen, on Wednesday. A decision is expected by summer 2022.