Best bets and odds for entire slate of games 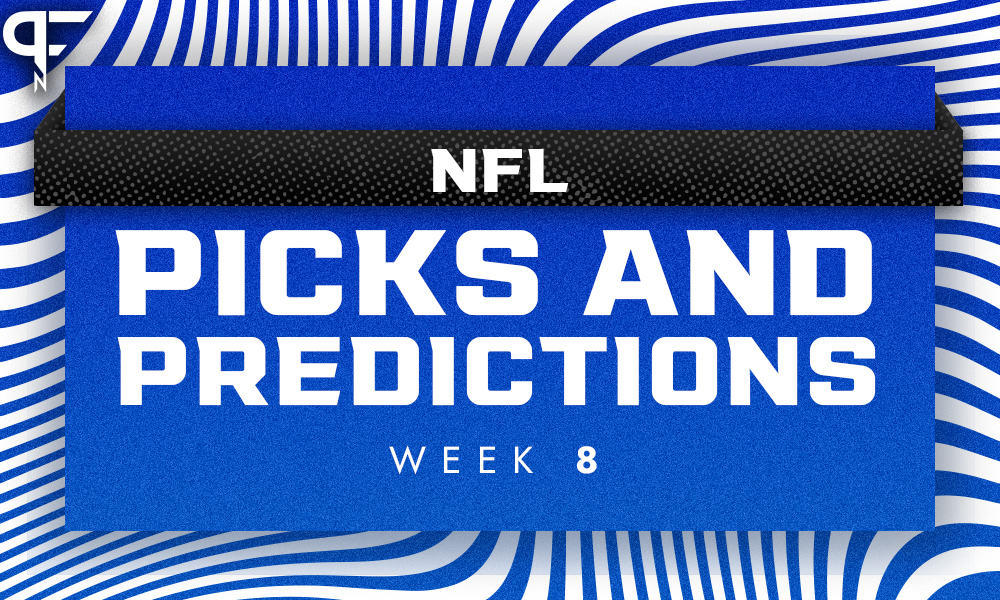 With only two teams on a bye this week, we have an action-packed slate of games. Looking at the Week 8 NFL betting lines and odds, we provide you with our picks, predictions, and best bets for each game. Will your favorite teams be able to come out on top (or at least cover the spread)?

The Week 8 schedule has some tough games, making it difficult for the sportsbooks to set lines. That has led to some intriguing situations in the current NFL odds for Week 8. With the NFL standings for 2021 foreshadowing some dramatic finishes, let’s look at how the sportsbooks have handicapped the Week 8 NFL action and whether our picks and predictions agree with their thoughts.

Here are the Week 8 picks and predictions and NFL odds for Sunday’s games as of 12:30 PM ET on October 28.

Looking back at last season, could you have ever imagined the Cincinnati Bengals would one day be laying double digits on the road? Well, that is exactly the case here against the New York Jets. And even though the NFL odds and betting lines might seem high for this one, they might not be high enough.

The Jets are arguably one of the worst teams in the NFL. Their only glimmer of hope was Zach Wilson. Yes, he was turnover-prone, but the rookie provided a spark in some games this year. Wilson has already been ruled out for this game, so now the Bengals get to play against New York’s backup.

The Bengals are in sole possession of first place in the AFC North after a complete dismantling of the Baltimore Ravens last week. They are finally starting to click on offense, and Joe Burrow looks healthier each and every week. The connection between Burrow and Ja’Marr Chase is fun to watch, and Chase is currently the top rookie according to PFN’s Rookie Rankings.

The Bengals should easily get the win in this one and cover the big spread.

Are the Tennessee Titans one of the best teams in the AFC right now? After two impressive wins against the Buffalo Bills and Kansas City Chiefs, Tennessee has a clear path to the playoffs right now. They are all but guaranteed to win the AFC South, and a victory here against the Colts would bring that even closer to reality.

I wouldn’t overthink this one. The Titans are playing behind an excellent offensive line and a dominant running back in Derrick Henry. This game might be closer than some think, but the Titans should get the win. The NFL odds and betting lines make it so that I am not confident enough to make it a best bet, but it’s pretty close.

The Los Angeles Rams were favored by a similar betting line last week against the Detroit Lions. They trailed that game for nearly three quarters and finally pulled away in the fourth to win by 11. However, Detroit and head coach Dan Campell have a lot more fight in them than this Texans team.

Houston is going to be a seller at the 2021 NFL trade deadline. They have already moved RB Mark Ingram back to New Orleans and are rumored to be shopping other pieces as well. The Deshaun Watson drama has left a black cloud over this team for the entire season, and they simply do not have the talent to keep up with Super Bowl contenders like the Rams. This one might be embarrassing.

In one of the more interesting games of the week, the Steelers and Browns will battle to stay relevant in the AFC North. This one will depend on the health of Baker Mayfield. If he is good to go, I lean Cleveland. However, I cannot see them beating Pittsburgh with a backup QB. As soon as we get word on whether Mayfield is in or not, expect these NFL odds and betting lines to move more in Cleveland’s favor.

The Lions pulled out all the stops last week against the Rams. In the first half alone, they successfully completed an onside kick and a fake punt. They are going to need to have that same energy this week against the Eagles.

Through the first few weeks, I never imagined I would be saying this — the Lions will be my Week 8 best bet. The team is hungry for a win and playing at home. The Eagles are not a good football team, and they have holes all over their roster. I will gladly take the points and sprinkle a little on the moneyline as well.

It is virtually impossible to trust either of these two teams this week. The 49ers cannot seem to get out of their own way and have now lost four straight. The Bears are coming off a humiliating loss in Tampa Bay, and their offense appears to be in tatters. If any game in Week 8 deserves to end in a tie, it is this one.

In a game with struggling teams, take whoever is getting the points at the time. Nonetheless, I’m staying away.

This is a game with two teams heading in opposite directions. Atlanta has now won three of their last four, and the Panthers haven’t won a game since playing the Texans in Week 3. The Falcons are at home, have better weapons, and have a QB that I can trust. We are lucky the betting line is only at a field goal in this one. Take the Falcons to win.

The Miami Dolphins started the year with so much hope. Well, that has quickly evaporated as they stare down another awful season with a 1-6 record. They seem to have no faith in their QB, might be making changes to their coaching and management staff, and are possibly looking to acquire Deshaun Watson. It is a complete mess.

Meanwhile, the Buffalo Bills are coming out of their bye week after a loss to the Titans. They are angry, rested, and playing a terrible football team. The Bills are another one of my best bets in Week 8.

The New England Patriots are coming off a complete destruction of the New York Jets. While that was fun for their morale, they will now be facing legit contenders. The Chargers’ offense will give this Patriots secondary all that it can handle.

The Seahawks simply are not the same team without Russell Wilson. There is a reason that Wilson always graded highly in Pro Football Network’s Offensive Value Metric — he is one of the most valuable players when it comes to the team’s success in Seattle. Without him, I don’t see how they get by a frisky Jacksonville team. It surprises me to say, but one of my Week 8 picks and best bets will be Jacksonville and the points.

This is a matchup between two teams who came into the year with so much hope. Their respective seasons have fizzled out in spectacular style. Washington is on a three-game losing streak, while the Broncos have lost four straight. Denver’s offense has to gain some traction. If it doesn’t, at least one coach should probably get fired ahead of Week 9.

Strange things tend to happen in the NFC South, but this should not be one of them. The Buccaneers have largely dismissed all who challenge them in 2021 — this should follow script.

The Saints’ secondary is a good unit, but their pass rush should not cause Tom Brady any issues. The only real question is whether Jameis Winston can make enough plays against his former team to make this interesting.

Here are the Week 8 picks and predictions and NFL odds for Sunday night’s game as of 12:30 PM ET on October 28.

Week 8’s Sunday Night Football matchup is between two teams looking to keep up in the playoff picture. The Cowboys are fighting for the top spot in the NFC; the Vikings are still hanging on to the last Wild Card spot. Unfortunately for the Vikings, they are running into a team that is not only coming off of their bye but also playing their best football.

Dallas’ offensive line has been the best in the NFL and has helped put them in a position to possibly have two 1,000-yard rushers on their roster. The Vikings have been up and down all year, especially offensively.

Here are the Week 8 picks and predictions and NFL odds for Monday’s game as of 12:30 PM ET on October 28.

There is every chance this matchup sees the Giants become a sacrificial lamb to an angry Chiefs team. Kansas City was just humiliated by the Titans. Furthermore, their shot at a bye in the AFC Playoffs hangs by a thread given their four losses. Kansas City’s defense should give Jones and the Giants a chance to cover the spread, but the Chiefs will win the game.