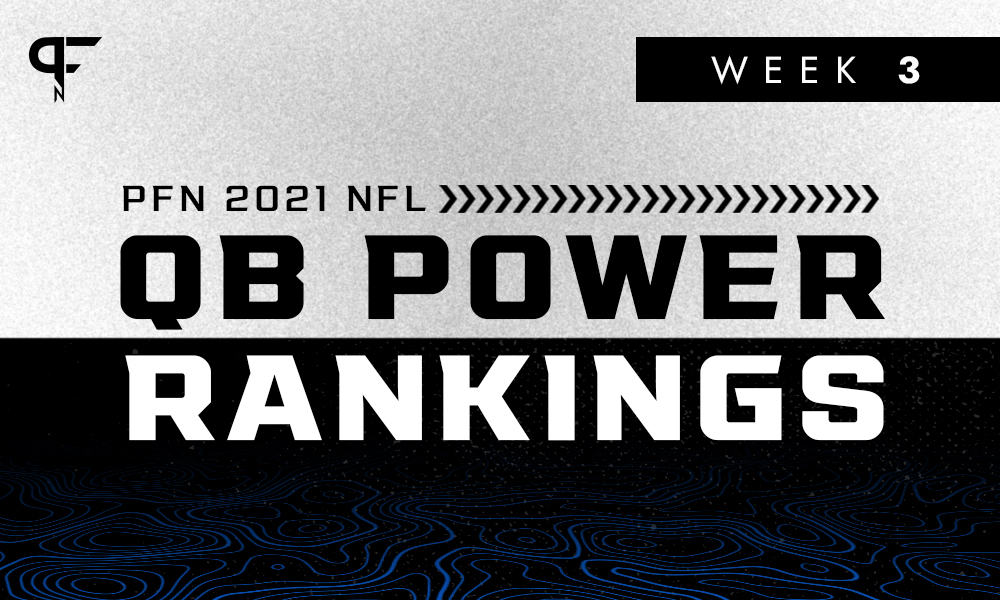 No single position in football has a greater influence on a team’s success (or failure) than the quarterback. There’s no disputing that. But which signal-caller is the best? That’s where the great quarterback rankings debate emerges. With modern-day analytics and a good old-fashioned eye test, I look to answer that very question with these QB power rankings.

Of the 32 starters listed, 12 are completing more than 70% of their throws heading into Week 3. That’s unheard of. I know it’s only been two weeks, but I cannot remember a time when quarterbacks were playing this efficiently. And I’ve been watching NFL games for the better part of 30 years.

Granted, the rules in today’s game are skewed toward quarterback prosperity. So, dismissing this as an aberration could prove premature. However, while it’s a trend that’s sure to stick around, I don’t anticipate a dozen passers maintaining this production for 17 games. With an extended season comes added opportunity for error, and unfortunately, injury.

This brings me to my next topic of Week 2 — the injury bug. While you’ll only see one new name among this week’s QB power rankings, several signal-callers are at risk of missing this week’s game. But one man’s loss is another’s gain. For a handful of QB2s, this weekend may be what spurs their careers onward. Because how they fare in Week 3 will have an incredible effect on how they’re viewed around the league.

Nonetheless, there have been some shocking realizations so far in September. And while a handful of listed passers have proven better in years past, how they’ve conducted themselves in 2021 has them in some precarious positions among these rankings. Hey, every year is a clean slate to become the league’s best quarterback.

Beginning at the top of the QB power rankings, here’s where we stand after Week 2.

It wasn’t perfect, but Patrick Mahomes’ onslaught of production extended into Week 2. Mahomes has tossed at least 3 scores for consecutive weeks, amassing no fewer than 337 passing yards. With the Kansas City Chiefs defense playing like it is, I expect there to be an abundance of spectacular performances from the league’s most talented passer.

Russell Wilson’s long ball continued into the second stanza of the NFL regular season. After catapulting 3 more deep throws downfield — combining for 112 air yards and 2 touchdowns — only Daniel Jones (9.2) averages more air yards per completion. Wilson’s number isn’t being called upon as much as it was in early 2020. Yet, only a few quarterbacks are playing as proficient as the Seahawks’ franchise passer.

Does Tom Brady look spry or what? It’s as if he’s so accustomed to winning that he wants to share that success with as many other players as he can before retiring in 2057. Take Sunday’s game, for instance. Brady completed passes to 10 different players, garnering 5 scores on 24-of-36 passing. He’s on track for yet another Super Bowl run, and at the same time, he’s making sure the entire Tampa Bay roster gets in on the fun.

After attempting 58 passes in Week 1, Dak Prescott’s arm was given a break against the Los Angeles Chargers. After all, Big D’s stud passer just recovered from a shoulder strain mere weeks ago. Despite the reduction in pass attempts, Prescott made the most of his opportunities, completing 23-of-27 passes, concurrently securing a much-needed win in the process.

Two games into a season under a new helmet, and Matthew Stafford looks as if he’s played for coach Sean McVay his entire career. Furthermore, Stafford is clicking with receivers Robert Woods and Cooper Kupp as the 2-0 Los Angeles Rams look to knock off the defending Super Bowl champion Bucs next weekend. If Stafford outduels Brady, expect another jump in our QB power rankings.

One could argue that Kyler Murray is playing as good as any quarterback in the NFL right now, and I wouldn’t get defensive. Outside of a few rough turnovers this past weekend, Murray has been on point. With an ability to extend plays like that of Lamar Jackson coupled with an arm talent like that of Wilson’s, Murray has officially entered his name into the MVP discussion — again.

We all know what makes Lamar Jackson one of the league’s most difficult quarterbacks to contain. But when Jackson can dial in on his throws, he’s atop the league at the position. In the first half of Sunday night’s game, Jackson’s passing numbers had everyone clamoring about how he’d be a bum QB had he not led the league in rushing for signal-callers. However, as we saw in the second half, it’s about consistency, not incompetence.

The game plan for Aaron Rodgers and the Green Bay Packers offense went much better this time around. With the Detroit Lions defense planting more defenders in the secondary, Rodgers accepted his fate and handed the ball to fellow Aaron, Aaron Jones.

But that didn’t stop Rodgers from turning the page on what was an embarrassing Week 1. With the offense more balanced, Rodgers took advantage of play-action and mismatches to complete 22-of-27 for 255 yards and 4 touchdowns. Now, that’s more like it.

I’m so excited to see Derek Carr rise into the single digits of this week’s QB power rankings. Yet, I feel he could and should be higher. He’s played downright sensational these past two weeks. Not only is Carr playing clutch and producing huge numbers, but he’s done so against two outstanding defenses — Baltimore and Pittsburgh.

Unfortunately, Josh Allen is the odd man out. With all the extraordinary quarterback play these past couple of weeks, Allen’s above-average output drops him five places in this week’s QB power rankings. While he still elicits moments of yesteryear, we haven’t seen Allen play as consistently elite as expected. But the season is young.

In just his second season, Justin Herbert is being tasked with carrying the Los Angeles Chargers offense on his back. For the most part, he’s done so with success. In 17 starts, Herbert has thrown for 300+ yards 10 times, tossing 3+ scores on six occasions. However, he’s still young. So you can expect him to make some poor decisions now and again.

I know it’s only been two weeks, but it’s absurd that Baker Mayfield has attempted 49 passes and completed 40 of them. Sure, his 5.6 average air yards per completion isn’t striking, but it’s not like the Cleveland Browns offense is loaded with receiver talent at the moment. Despite a reputation as a gambler, Mayfield has come into his own, dating back to the latter half of the 2020 season.

It’s asinine to see that the Minnesota Vikings are 0-2 and that it’s somehow because Kirk Cousins is not a good quarterback. In the past, he was an easy target, given his propensity to turn the ball over. However, as of right now, he’s not only not turned the ball over, but he’s been responsible for 5 of the Vikings’ 7 touchdowns this season.

Ryan Tannehill bounced back from a meager Week 1 performance just as the Tennessee Titan’s rushing attack got back on track. Hmmm, funny how that works. With that said, Tannehill took advantage of a talented group of receivers by completing 27-of-40 throws for 347 yards and a much-needed Titans win.

We all know Teddy Bridgewater isn’t one to take many risks with the football. And through two weeks, he’s been content with that approach, throwing a lot of underneath passes and no interceptions. However, that route has also proven fruitful for Bridgewater. He’s averaging nearly 300 yards passing with two-straight multi-touchdown games in just two starts for his new team — the undefeated Denver Broncos.

Jared Goff is on a new team, playing in a new system, with mostly the same results. On Monday night, Goff was hot to begin the game, completing 8 straight passes, including 2 touchdowns. But things fizzled out for him and the Detroit Lions.

I’m not sure if it was the rain or the fact he began pressing the matter, but Goff turned into a turnover machine throwing 2 interceptions and losing a costly muffed snap when his team needed him the most.