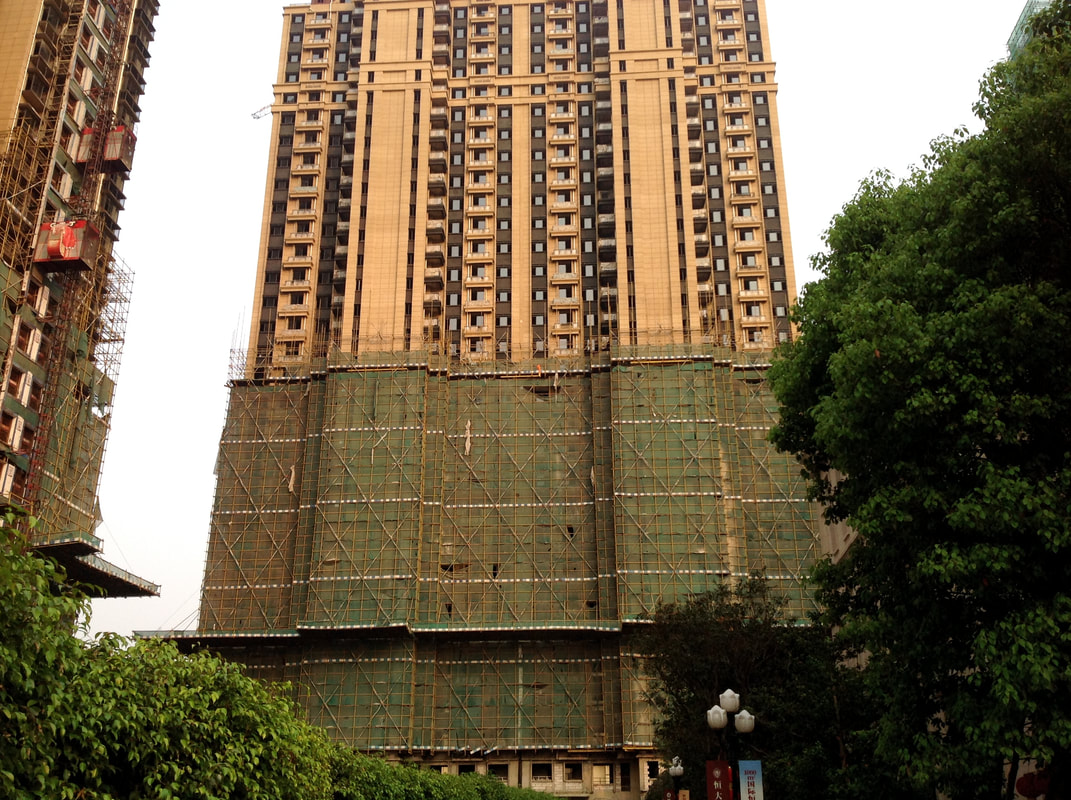 When Anne Stevenson-Yang lived in China in the 1990s and 2000s, she went on long weekend bike rides from her home near the airport, and she’d see the ghost towers: “an endless inventory of office parks and apartments, all empty.” She saw more developments mushroom after she moved to the US in 2014, when she made monthly work trips to China. As the co-founder of J Capital Research, which publishes reports on Chinese listed companies, she was intrigued by these projects. At first, she thought: If there were so many empty new buildings in Beijing—a city of high demand for housing and high incomes—what was it like in other places? On her travels through China, she saw ghost towns all over. She took photos and put them up on a web site, calling the images “Eye candy for pessimists.”

These unoccupied buildings, Stevenson-Yang realized, were the most visible signs of a swelling real estate bubble—the bubble that China has been attempting to control, and that has led to a danger of default by Evergrande, one of China’s biggest property developers. Over the years, Evergrande has run up around $300 billion in debt. In a 2017 interview, Stevenson-Yang called it “the biggest pyramid scheme the world has yet seen.” But Evergrande’s troubles were obvious even 10 years ago, Stevenson-Yang told Quartz. “It’s just been holding on, somehow, for 10 years.”

Spotting the red flags in the Chinese property market

Part of the reason Stevenson-Yang was skeptical about Evergrande had to do with the nature of the real estate market in general—with the ghost towns she was seeing, for instance. Until last year, when the Chinese government began to aggressively control how real estate developers obtained financing, these companies found it easy to take on high levels of debt to fund their projects.

They did this by building houses purely for speculative purposes, and not for people to live in, Stevenson-Yang said. “Say a city like Beijing had a rule that a person couldn’t own more than two apartments,” she explained. “These developers would then build just outside the city limits, so that someone could buy eight apartments if they wanted.”

The projects were also steeply aspirational, so that buyers felt they were purchasing something that would make them much richer. “I remember visiting a pork company in Hunan province, which is quite a poor province,” Stevenson-Yang said. “This was around 2011, and the only vehicles you’d see in this part of the province were tractors.” But there was a giant billboard advertising a housing complex, with well-dressed people walking near fountains, “as if to say: ‘You see tractors and dirt now, but wait 10 years, and you’ll get Versailles.’” No wonder, she said, that people were eager to put down advance payments for apartments, if they thought it would supercharge their upward mobility.

Stevenson-Yang called Evergrande a pyramid scheme, she said, because like other developers, it excelled at pretending to create value where none actually existed. If a developer was building an apartment tower with 200 units and saw that there was a market for only 15 units, she said by way of example, “they’d sell those 15 at, say, 7,000 renmimbi ($1,080) per square meter and call that Phase 1.”

Some months later, developers would pitch Phase 2: another 15 units, priced at 8,000 renmimbi per square meter. “They’d tell buyers: ‘Phase 1 sold out already, and the price is now 8,000, so the value has already gone up. You’d better put your money down now.’” In Phase 3, at 9,000 renmimbi per square meter, the developer would once again point at the supposedly escalating value of the apartment, even before construction was finished. “And to finance each new phase, they’ll raise money by using the previous phases, at their inflated value, as collateral. So it spirals up, up, up.”

Evergrande was “the biggest and most prominent developer that played this game,” Stevenson-Yang said. “It was founded by a guy who’s a gambler, who loves the tables in Macau.” Xu Jiayin, the founder, had once worked in a cement factory, according to Chinese media reports; then he worked his way up through the iron and steel industry to establish Evergrande in 1996. When a series of property investments made him wealthy, he acquired an extravagant lifestyle—as well as a penchant for risky business.

Evergrande repeatedly announced projects and then scrambled to find financing for it—a pattern that Stevenson-Yang found exasperating to watch. “He’d quote unquote sell half his soccer team to Alibaba, say, except that that’s really not a sale, it’s a loan,” she said. “Or he’d start a water company, or an electric vehicle company—he’d have a zillion subsidiaries and raise money for those. They’ve been up to the edge of the cliff again and again, and then figured a way out. Evergrande is like Houdini.”

Why, then, did banks keep lending to him? Why did investors keep buying Evergrande’s paper? Partly, Stevenson-Yang said, because higher risk promised higher return, and partly because Evergrande kept its books looking healthy by counting all its real estate inventory as assets, “as if it could be sold at those valuations—although of course, it couldn’t.”

But people also read an implicit political guarantee in China’s craze for real estate, she said. “I was going around to investment funds a decade ago, pointing to all this risk and all the indebtedness. And they’d say: ‘That’s well and good. But the government is going to bail them out.’ And that’s true—until it’s not.”