The Supply Chain is Still Broken 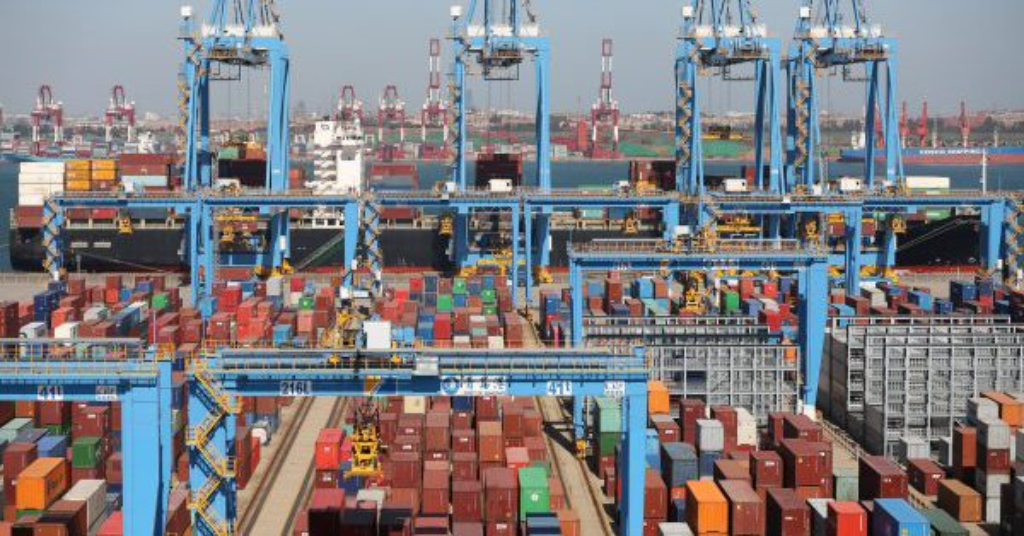 The Supply Chain is Still Broken

Why products are still hard to find and prices are so high.

The Atlantic’s Amanda Mull explains why “Americans Have No Idea What the Supply Chain Really Is.”

As everyone has been forced to learn in the past year and a half, when the works get gummed up—when a finite supply of packaging can’t keep up with demand, when there aren’t enough longshoremen or truck drivers or postal workers, when a container ship gets wedged sideways in one of the world’s busiest shipping lanes—the effects ripple outward for weeks or months, emptying shelves and raising prices in ways that can seem random. All of a sudden, you can’t buy kettlebells or canned seltzer.

All of this was supposed to be better by now. Not perfect—even a triumphant end to the pandemic wouldn’t stop climate change or political unrest from throwing their own wrenches into global logistics—but better. Instead, as Delta has forced new restrictions in countries fighting to contain the virus and deepened uncertainty and fear in the United States, the game of supply-chain whack-a-mole that manufacturers and shippers have been playing for the past year and a half has grown only more complex. Some book publishers have had to delay new releases because the pulp used to manufacture paper has been gobbled up by online shopping’s endless appetite for cardboard.

To Americans whose lives have gotten progressively closer to normal this year—who are back in the office, whose kids are in school, who eat inside restaurants and go on vacation without much worry—these nagging problems can be baffling. They shouldn’t be. Americans are habitually unattuned to the massive and profoundly human apparatus that brings us basically everything in our lives. Much of the country’s pandemic response has treated us as somehow separate from the rest of the world and the challenges it endures, but unpredictably empty shelves, rising prices, and long waits are just more proof of how foolish that belief has always been.

The scolding tone of this and of the essay’s title strikes me as odd. I’m a reasonably well-read citizen and likely pay more attention to this sort of thing than most. But there’s not really any reason that folks who don’t work in the constituent industries should understand this byzantine process. Absent once-a-century catastrophes . . . It. Just. Works.

But the very innovations that make it seem reasonable to expect purchases made on Amazon at dinnertime to be at one’s doorstep the next morning are the thing that makes the whole thing so vulnerable to unexpected shocks.

When I called up Dan Hearsch, a managing director at the consulting firm AlixPartners who specializes in supply-chain management, I described the current state of the industry to him as a little wonky. He laughed. “‘A little wonky’ is one way to say it,” he said. “‘Everything’s broken’ is another way.” Hearsch told me about a friend whose company imports consumer goods—stuff that’s normally available in abundance at any Walmart or Target—from China. Before the pandemic, according to the friend, shipping a container of that merchandise to the U.S. would have cost the company $2,000 to $5,000. Recently, though, the number is more like $30,000, at least for anything shipped on a predictable timeline. You can get it down to $20,000 if you’re willing to deal with the possibility of your stuff arriving in a few months, or whenever space on a ship eventually opens up that’s not already accounted for by companies willing to pay more.

Such severe price hikes aren’t supposed to happen. Wealthy Western countries offloaded much of their manufacturing to Asia and Latin America precisely because container shipping has made moving goods between hemispheres so inexpensive. When that math tips into unprofitability, either companies stop shipping goods and wait for better rates, or they start charging you a lot more for the things they ship. Both options constrain supply further and raise prices on what’s available. “You look at the price of cars, you look at the price of food—the price of practically anything is up significantly from one year ago, from two years ago,” Hearsch told me. “The differences are really, really quite shocking.” The Bureau of Labor Statistics estimates that as of July, consumer prices had grown almost 5 percent since before the pandemic, with some types of goods showing much larger increases.

And, oh, the pandemic hasn’t gone away.

Overseas shipping is currently slow and expensive for lots of very complicated reasons and one big, important, relatively uncomplicated one: The countries trying to meet the huge demands of wealthy markets such as the United States are also trying to prevent mass-casualty events. Infection-prevention measures have recently closed high-volume shipping ports in China, the country that supplies the largest share of goods imported to the United States. In Vietnam and Malaysia, where workers churn out products as varied as a third of all shoes imported to the U.S. and chip components that are crucial to auto manufacturing, controlling the far more transmissible Delta variant has meant sharply decreasing manufacturing capacity and reducing manpower at busy container ports. (Vietnam has fully vaccinated a single-digit percentage of its population, while Malaysia is beginning to recover from its own massive Delta spike, in spite of good vaccination rates.) These problems are exacerbated, Hearsch said, by the near-total evaporation of maritime shipping’s quickest alternative: stowing shipments of goods in the bellies of commercial passenger jets already flying between Asia and the United States, which have been making far fewer trips during the pandemic.

And, no, we can’t just make it ourselves:

Domestically, things aren’t a whole lot better. Offshoring has systematically decimated America’s capacity to manufacture most things at home, and even products that are made in the United States likely use at least some raw materials or components that need to be imported or are in short supply for other reasons. Pharmaceutical manufacturing, for example, has been stymied at times because many active ingredients are imported from China, or because some drugs are only manufactured overseas, according to Michael Ganio, the senior director of pharmacy practice and quality at the American Society of Hospital-Systems Pharmacists, which maintains a database of drug shortages in the United States. Companies that want to expand their capacity to manufacture or store more inventory are facing shortages of their own—namely, Hearsch said, that steel and sheet metal used to build warehouses and factories are in scant supply, partly because fabricators have to compete for workers in a tight labor market and often can’t run their factories at full capacity.

And, no, we can’t just pay people more and suck it up with the higher price tags:

If you look hard enough at the problems plaguing any other part of the supply chain, you eventually find the point at which the people who do the actual work of making and moving things just can’t keep up. Container ships wait offshore, sometimes for months, because ports don’t have the capacity—the longshoremen, the warehouse staff, the customs inspectors, the maintenance crews—to unload ships any faster. Truck drivers to distribute those goods were in high demand even before the pandemic, and now there are simply not enough of them to do all the work available. The problem is so bad that some U.S. staffing agencies have started recruiting truckers from abroad, and some experts worry that the Biden administration’s recently announced vaccine mandates for large employers could constrain that labor pool even more, at least for a time. Many industry groups and freight companies believe the number of vaccinated truckers to be low, according to FreightWaves, a website that covers the shipping industry. Small trucking companies anticipate that a significant number of drivers will want to jump ship from larger carriers, which will likely be subject to the mandates once they go into effect. Even in a best-case scenario, such upheaval would scramble freight availability for months.

In other domestic supply-chain jobs, the reasons for the scarcity of ready-and-willing workers are pretty glaring. Food packing and processing rely disproportionately on poor visiting workers or immigrants already in the U.S., whose communities have borne the brunt of some of the pandemic’s most catastrophic outcomes. Industrial meatpackers, for example, are having a tough time hiring right now, which might be affecting what you can buy at the grocery store. This type of work was brutal and dangerous before the pandemic, and when the coronavirus hit, some meatpacking plants in the Midwest and Southeast had outbreaks so intense that they briefly drove spikes in statewide infection data all by themselves. Tens of thousands of people were infected, and hundreds of workers died—numbers that don’t include those who were infected or killed because they lived with people who worked in these kinds of facilities. At one Iowa pork plant, Tyson Foods fired seven managers who were accused of participating in a gambling ring to bet on how many of their employees would catch COVID-19. If the meatpacking industry has suddenly realized that fewer people are available to operate its plants than were available before the pandemic, perhaps that’s because many of them have died or been permanently disabled by COVID-19, and those who might replace them don’t want to meet the same fate.

Which gets, at long last, to Mull’s titular point:

Both at home and abroad, labor is the ghost in the machine. The supply chain is really just people, running sewing machines or loading pallets or picking tomatoes or driving trucks. Sometimes, it’s people in the workforce bubbles of foreign factories, eating and sleeping where they work, so companies can keep manufacturing sneakers through a Delta outbreak. The pandemic has tied the supply chain in knots because it represents an existential threat to the lives of the humans who toil in it. The fact that Americans now can safely go on vacation does not mean that people half a world away can safely make new bathing suits for them. The normalcy sought by consumers was created by all of this hidden work, and that normalcy has always been threatened by dangerous working conditions. No one can expect things to go smoothly until everyone is protected.

It’s too simple to say that “The supply chain is really just people.” It’s container and cargo hold availability and all manner of other infrastructure issues, too. But, yes, none of that works if there aren’t the people to do all of the “hidden” jobs that get things made, packed, transported, unpacked, stocked, and rung up.