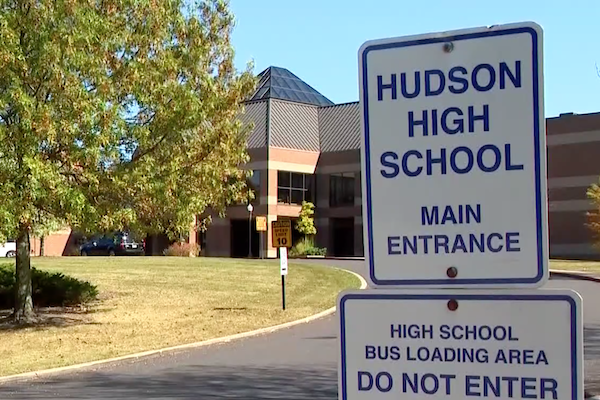 A public high school in Hudson, Ohio, has managed a remarkable feat: censoring a college course and — thanks to a mayor’s grandstanding and false claims that a book of writing prompts is “child pornography” — leading police and prosecutors to investigate the class. Today, a coalition of civil liberties organizations led by FIRE is sending a letter to the high school and local law enforcement explaining that the high school’s administration is violating the First Amendment and state law.

Under Ohio’s College Credit Plus program, secondary school students may take courses offered by local universities and colleges to earn dual credit from their high school and the college. High school seniors at one Cleveland-area school, Hudson High, can take an introductory college writing class offered by Hiram College, a local private college. The textbook for the course — “642 Things to Write About” — is a collection of hundreds of writing prompts, some of them witty, absurd, or provocative.

When a parent of a Hiram High senior flipped through the book, she was shocked to learn that some of the prompts involve risqué material — none of them, it turns out, were actually used in the class, which only covers about 6% of the prompts in the book. Some of these unused prompts involve death (“Choose how you will die”), murder (“Write a scene that begins: ‘It was the first time I killed a man’”), sex (“Describe a time you wanted to orgasm but couldn’t”), and substance abuse (“Write a letter from the point of view of a drug addict”). Others are more mundane (“Find a photograph. Write the story of what’s happening outside the frame”) or humorous (“Write a script to give telemarketers to sell plastic pooper-scoopers”).

Administrators, forecasting the storm of angry parents brewing on Facebook, were prepared for the next school board meeting to be rough. Hudson High’s principal announced that the school was “collecting” — that is, seizing — the book from students. He explained that none of the controversial prompts had ever been used and promised that administrators would find a suitable, alternative book.

Angry parents, supported by “Moms for Liberty Summit County,” were not satisfied. One parent, an attorney, claimed that “thousands” of crimes had been committed by the book’s distribution and promised to take the matter to the district attorney. But it was Hudson Mayor Craig Shubert who stole the show. Proclaiming that he had spoken to a judge (which is true) and that the judge had “confirmed” that the book was “essentially . . . child pornography,” the mayor demanded that the school board members resign and, if they did not, they “will be charged.”

That dramatic denunciation was captured on video:

Not ‘child pornography,’ but prosecutors and police mount investigation

In a press release, Summit County Prosecutor Sherri Bevan Walsh and the Hudson Police Department denounced threats sent to board members and said “a prompt about a fictional writing is not child pornography.” That’s true, and it’s helpful for public officials to explain as much — especially in contrast with Mayor Shubert’s irresponsible public indictment. It’s also appropriate for law enforcement to investigate threats of violence, as “true threats” are not protected speech and inhibit public debate.

Police and prosecutors should not be investigating the content of college courses and textbooks.

Unfortunately, the press release went on to say that, although the prompts are not child pornography, police and prosecutors will “review this matter and determine if there is a factual basis that any laws were broken . . . by the writing prompts[.]”

None of this is a crime. This is a college writing class. It’s a book that contains, among hundreds of questions, a few salacious prompts the course didn’t even use. Police and prosecutors should not be investigating the content of college courses and textbooks.

That the class involved potentially adult material probably should not have come as a surprise to attentive parents. In order to take the class, parents were reportedly required to sign a waiver acknowledging that the course could include “adult themes and content, including books,” and that the content of the college course “will not change for students participating in the College Credit Plus program.” The state’s CCP website likewise warns parents worried about “content that is oriented toward a mature or adult student” that colleges will not “modify course content based on the ages of the students.”

If college courses were childproofed, their content would be diluted to meet the expectations of K-12 institutions and parents.

First, when colleges open their courses to high school students — a program parents want, the state supports, and from which students benefit — they face the question of whether the content of those courses should be changed to reflect the students’ age. The answer must be no: The classes are voluntarily taken with parental permission, and students enroll for the purpose of engaging with higher-level material and discussions, presumably because their parents are confident that they are mature enough for the content.

As noted by the U.S. Supreme Court, college classes are “peculiarly the marketplace of ideas,” providing curious students the opportunity to be exposed to a “robust exchange of ideas which discovers truth ‘out of a multitude of tongues,’ [rather] through any kind of authoritative selection.” If college courses were childproofed, their content would be diluted to meet the expectations of K-12 institutions and parents. Conflict over what material is “appropriate” for high school students has long led to censorship of the books and materials used in class — see, for example, recent efforts to limit access to a book about Rosa Parks or “To Kill a Mockingbird” because some might find their content offensive. Expanding those disputes to higher education will yield censorship. This isn’t an idle question even within Ohio’s College Credit Plus program: Last year, state lawmakers demanded that Kent State University cease an anime-themed CCP writing course because it contained adult-oriented material.

Second, the First Amendment protects the rights of faculty and students who discuss pedagogically relevant material in college classes. That right doesn’t depend on where the college class is taught, whether on a college campus, online, in a high school, or in a prison. High schools do not need to offer college courses, but their choice to do so obligates them to protect the constitutional rights of students and teachers commensurate with the rights that would be available on a college campus. Similarly, parents do not need to enroll their students in college courses, but they cannot prevent others from taking classes or having discussions just because some — other parents, the public, police, or lawmakers — find them morally objectionable.

Today, FIRE — joined by the National Coalition Against Censorship and PEN America — sent a letter to Hudson City Schools, state authorities, and local law enforcement raising concerns about their actions.

Administrators, police, and prosecutors who seize books and investigate instructors over college courses are entering dangerous, illiberal territory. If students cannot read a book that contains salacious questions in jest, what will the response be when a book contains serious questions to which students or the public object?

FIRE defends the rights of students and faculty members — no matter their views — at public and private universities and colleges in the United States. If your rights are in jeopardy, get in touch with us: thefire.org/alarm.