Here’s What Haitians Are Finding When They Get Off U.S. Expulsion Flights : NPR 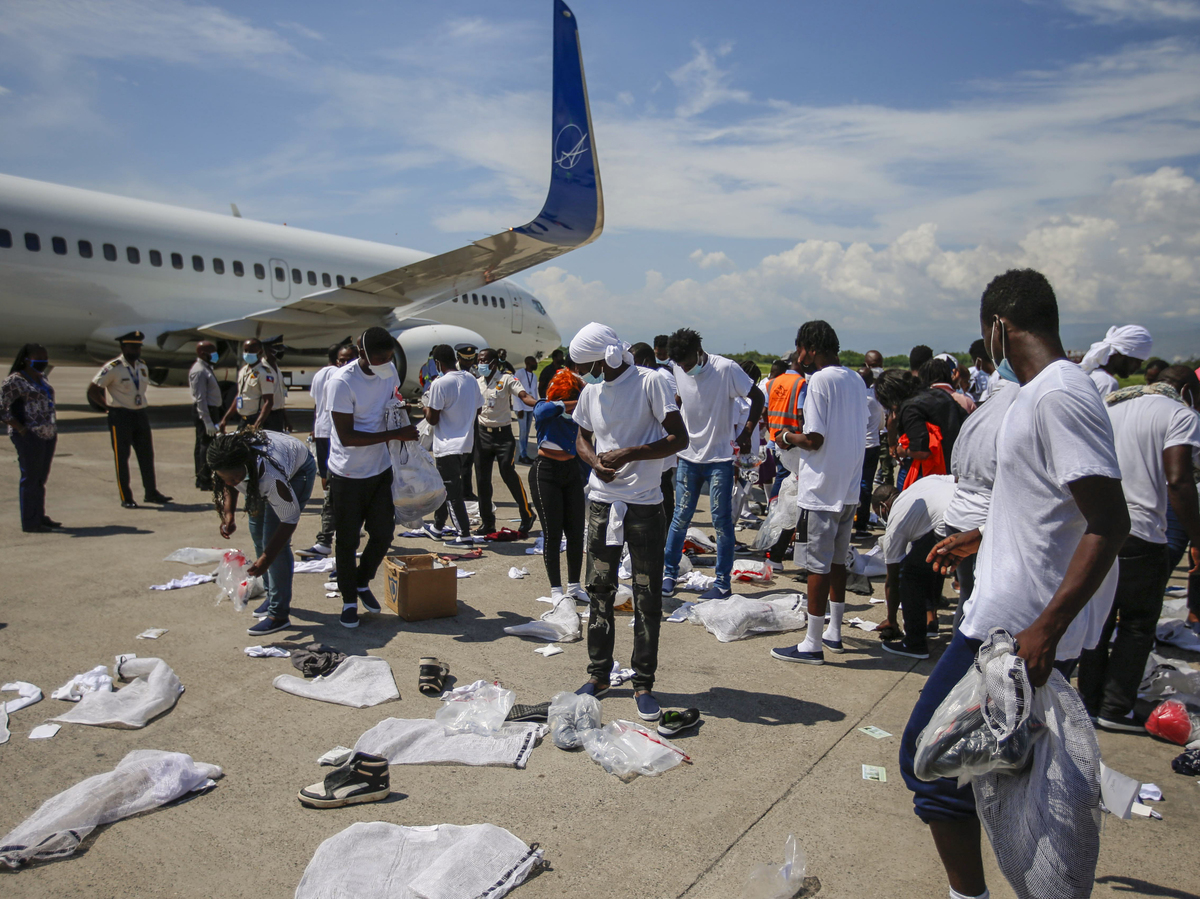 Haitians deported from the U.S. recover their belongings scattered on the tarmac of the Toussaint Louverture International Airport on Tuesday in Port-au-Prince, Haiti.

Haitians deported from the U.S. recover their belongings scattered on the tarmac of the Toussaint Louverture International Airport on Tuesday in Port-au-Prince, Haiti.

Migrants whom the U.S. is forcibly returning to Haiti are expressing anger, frustration and desperation when they arrive at Toussaint Louverture International Airport in Port-au-Prince.

The situation devolved into chaos Tuesday when a group of migrants rushed to try to get on a plane heading back to the United States.

Scenes of desperation on the airport tarmac

Adult migrants who had just been deported from the U.S. “caused two separate disruptions on the tarmac,” a Department of Homeland Security spokesperson told NPR.

In one incident, a group of migrants tried to force their way onto another plane, assaulting the aircraft’s pilots, according to a report by NBC News. Some of those who recently returned threw shoes at a plane as a security guard rushed to close its door, The Associated Press reported.

One Haitian who tried to get on the plane is Maxine Orélien, who told the AP that he and other migrants have no future in Haiti.

“What can we provide for our family?” he told the news outlet. “We can’t do anything for our family here. There is nothing in this country.”

Three U.S. Immigration and Customs Enforcement officers were injured in the fracas, a source who is familiar with the situation but who was not authorized to speak about it publicly told NPR. The officers’ injuries were not life-threatening, the source said.

People deported by the U.S. to Haiti arrive Sunday at the Port-au-Prince airport. Expulsion flights from the U.S. reportedly are expected to ramp up to seven daily flights this week.

People deported by the U.S. to Haiti arrive Sunday at the Port-au-Prince airport. Expulsion flights from the U.S. reportedly are expected to ramp up to seven daily flights this week.

Returnees are both upset and have been misinformed

“The returnees are angry,” Jacqueline Charles of the Miami Herald told NPR’s All Things Considered. “They are insisting that the border was open. They don’t understand why they were detained. They are complaining about the conditions in detention. They are blaming the Haitian government for ‘signing deportation papers’ against them.”

In many cases, Charles said, the migrants are acting on misinformation they got by word of mouth. Some believed their immigration status would be improved if they can show they had a child in South America — as many have, after fleeing Haiti in the wake of the 2010 earthquake. Others said they believed the U.S. would welcome them.

Few seem aware, Charles said, that the Biden administration is enforcing a Trump-era public health order of expelling migrants without giving them a chance to seek asylum. The first expulsion flights from the U.S. took place on Sunday; they’re expected to ramp up to seven daily flights this week, according to the AP and other news outlets.

Thousands of migrants are camped at the border in Texas

A migrant encampment under the international bridge in Del Rio, Texas, recently grew to more than 14,000 people, prompting the Biden administration to order a surge in border personnel and the start of expulsion flights.

The number of people at the camp has fallen to around 8,600, Texas Gov. Greg Abbott said on Tuesday. Many of the migrants are originally from Haiti, but others are from Cuba, Brazil and elsewhere.

Some of the migrants have been lucky enough to enter the U.S., where they’re now being moved to processing centers in other cities, as Texas Public Radio reported.

The rationale for deciding which migrants stay and who gets expelled hasn’t been publicly clarified. The AP said adults without families are prioritized for deportation — although families are also being sent back. While many Haitians are being deported, “thousands” are being released into the U.S., the news agency reported.

The American Civil Liberties Union and other groups have criticized the U.S. response to the migrant surge, particularly after agents on horseback were seen chasing and grabbing people who were carrying food back to their families.

Partners In Health, a nonprofit health care group that works in Haiti, issued a statement saying it is “outraged” by the “inhumane treatment of Haitian migrants and asylum seekers.”

Even before photos of agents on horseback drew outrage, Doctors Without Borders called on the U.S. to halt expulsion flights to Haiti on humanitarian grounds.

“The insecurity that we see today in Port-au-Prince is the worst we have seen in decades,” the aid group said.