False Cause Fallacy Reaches the Olympics 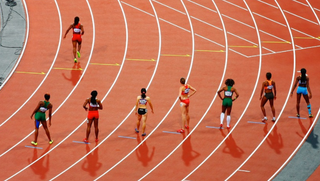 In general, people like the world to make sense. We try to see connections even where they don’t exist. We want to understand the “why’s” and exert control over our environments. And we want to support what we already strongly believe. These trends are even stronger in times of crisis, like during a pandemic. Uncertainty and ambiguity are unpleasant. No problem—the human brain can confidently find a supportive cause-effect connection, or at least can think it has found one.

Seeing a cause where one does not exist, or may not exist, is known as the false cause fallacy. Correlations are a primary source of this confusion because correlations can look an awful lot like causation even though correlation does not mean causation. Reflecting and possibly exacerbating this bias are the headlines claiming a cause-effect connection when the research behind the claim is correlational.

For example, there are regular negative headlines about helicopter parenting, social-media use, and virtual interaction that go a little too far in asserting “problems” or “consequences” or in asserting that something “makes” us turn out a certain way. There might be a cause-effect connection, but the cited evidence in these examples does not technically justify the assertion and even allows for the reverse possibility that the observed “problems” were actually the original cause and not the outcome.

In a recent study that showed older FaceTimers and Zoomers turned out to be more lonely, several headlines explicitly stated that the virtual interaction caused the loneliness, but the original researchers wrote that “it is possible that people who [already] felt more isolated and lonelier tended to make virtual contact more frequently” (Hu and Qian, 2021). In other words, loneliness might have caused Zoom use and not the other way around (which some authors did acknowledge by the end of their piece despite cause-effect headlines).

I’ve written before about race-related examples such as unfairly asserting genetic inferiority solely because black children academically underperform white children on average, or overly accusing police of racial profiling solely because black drivers are disproportionately pulled over by police (a concerning matter regardless of the causes). In these cases, the false cause fallacy might be strengthened by stereotypes or prejudice toward black people or the police, respectively.

Very recently, a headline stated that correlational data “prove” a cause-effect interpretation about why there is a backlash against critical race theory (Craven, 2021). The interpretation has to do with white people being afraid of changing demographics. It is a plausible view that is technically consistent with the data, especially given the historical analyses provided by the author, but correlation cannot prove causation.

Testosterone and the Olympics

In another consequential new example of false cause fallacy, in which prejudice toward transgender athletes might possibly have played a role, there were decisions to ban certain athletes from certain Olympic events based on an unjustified cause-effect interpretation of correlational results regarding testosterone level and athletic performance. Athletes with a testosterone level above a certain mark were not allowed to participate in certain women’s running events.

When people with a higher testosterone level behave differently or achieve different outcomes, can we assume the testosterone is the cause of those behaviors or achievements? No. The research design is technically correlational. The director of World Athletics’ health and science department has since acknowledged the mistake, though it’s too late for those athletes (Longman, 2021).

Another type of a correlation or co-occurrence is technically the case study, in that two characteristics can co-occur in a single person (or case) and might, for some observers, seem connected, like when an immigrant commits a horrible crime. Does being an immigrant make you commit crimes? No, there is no evidence about that. Is there even a traditional correlation between immigrant status and crime rates across a larger sample of people? No, the growing research evidence suggests there’s not even that link. If anything, immigrants show lower crime rates (Flagg, 2019). But yes, of course some crimes are committed by immigrants. When one case like the above can lead observers to see a broader connection, it’s called an illusory correlation.

What’s great about science is that sometimes correlational studies lead researchers to conduct a true experiment (or randomized trial) which is usually harder to do but can more definitively answer the cause-effect question. For example, the many claims (based on correlational studies) that social-media use was hurting teenagers’ mental health eventually found some true-experiment support (Hunt et al., 2018). The study was preliminary and not perfect, but specifically, it looks like there is some support for the authors’ statement that “limiting social media decreases loneliness and depression.”

Some authors who know about the false cause fallacy have falsely or misleadingly cited it in apparently resisting cause-effect evidence. For example, watching violence in movies or playing violent video games causes aggression in the average younger viewer based on true experiments, but some disagree by citing the correlational evidence. They argue, among other things, that just because an aggressive kid watches violent media doesn’t mean the violent media is causing aggression. That’s true, but it ignores the additional evidence in the true experiments. In fairness to this issue, it’s not that these experiments can prove any particular real-life violent event was caused by the perpetrator’s watching violent media, and some critics of violent media (usually not social scientists) have overstated the experimental results.

Correlation does not mean causation. I’ve written before about the many examples of correlational studies being mis- or overinterpreted (Stalder, 2018). In the years since then and especially lately, I’ve seen so many other examples of causal confusion, including in the Olympics, that I felt compelled to write this part-two piece. Some messages from science bear repeating.

If you’re concerned about coming to premature conclusions, try to be cautious in generalizing from a single case or two. And try to be cautious in accepting cause-effect headlines at face value. There could be a correlational study behind them, and the stated “effects” or “consequences” of something may turn out to be causes or simply an important possibility deserving of more research.