Yankees’ risky faith in Gary Sanchez pays off this time 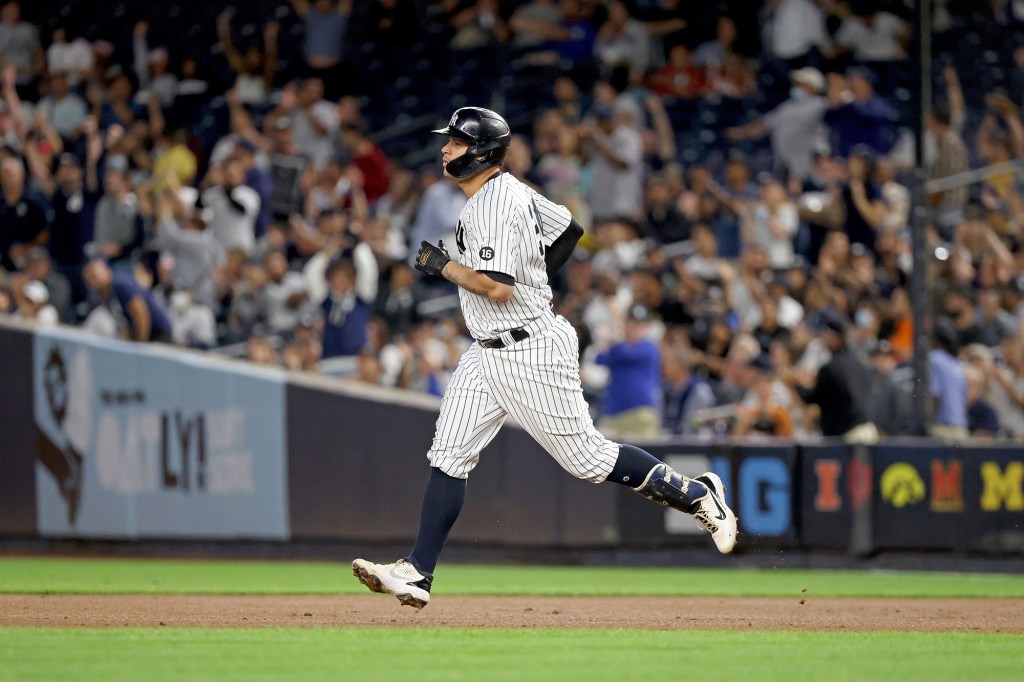 Pretend you’re Carrie from “Homeland,” going on yet another insane mission and putting together a team of geniuses and misfits.

Do you choose the people who give you the greatest chance of success? Or do you avoid those most likely to foul up the entire operation, no matter their upside?

The Yankees, beginning a tough baseball assignment, decided on Monday to go with the wild card, so to speak. They put their faith in Gary Sanchez behind the plate, and that faith paid off more than it didn’t, as Sanchez’s second-inning solo homer balanced out the two wild pitches on his watch en route to a tight, 4-3 victory over the lowly Rangers at Yankee Stadium, pulling the Yankees (84-67) within a half-game of the Blue Jays (84-66), who lost to the Rays, in the race for the AL’s second wild-card slot.

Nevertheless, at a juncture when the Yankees could have switched Sanchez for Kyle Higashioka with nary a complaint, not doing so feels like the wrong call.

“These final two weeks, everything’s up for grabs,” Aaron Boone said before the game. “I’m going to run out there what I think gives us the best chance to win. And I think in Higgy and Gary’s case, I think they both bring a lot of value. We’re going to need both of them to play big roles here down the stretch.”

They might need both. However, few would dispute that Higashioka is not only the defensively superior catcher among the pinstriped duo, but that he is far less likely among the pair to commit the sort of egregious mistake, be it mental or physical, that snowballs into something that infects (or at least impacts) the entire team.

That’s not entirely Sanchez’s fault. Let’s face it, for many reasons — some deserved, some absolutely not — he has served as a lightning rod around this club since he nearly won 2016 AL Rookie of the Year honors on two months’ work … and hasn’t matched that peak since. So his miscues get magnified and his strengths (his 22 homers tie him with the White Sox’s Yasmani Grandal and the Tigers’ Eric Haase for fourth-most among catchers in the majors) get minimized.

Aaron Judge, not inaccurately, described his fellow Baby Bomber as “a guy I feel like has gotten beaten down and kind of abused over the years. It doesn’t matter what it is.”

Many of those miscues, though, deserve some magnification. Just this September, as the Yankees sank out of a playoff spot, Sanchez provided the ghost tag of Jonathan Villar, the Clay Holmes wild pitch and the dropped foul pop that opened the floodgates against Cleveland. That represents a trilogy of brutality at the most crucial time of the season.

That he shook off that to provide Monday’s first run, on a night the Yankees needed all of their runs, drew postgame praise from his skipper and teammates for his resilience. Added Sanchez, through the interpreter to which he is entitled: “You have to understand, from time to time you’re going to make mistakes, but you cannot let that carry over.”

Good for Sanchez, although this isn’t (and shouldn’t be) a character test. The pair of wild pitches established a career high of 55, surpassing the 53 he allowed in 2017. He entered Monday’s action ranked among the league’s worst catchers with -9 defensive runs saved. Higashioka has four DRS, a 13-run differential in his favor.

You’ll recall that Higashioka replaced Sanchez last October as the Yankees’ primary receiver, and the team’s decision to still turn back to Sanchez for 2021 actually worked out better than some (like me) forecast; he at least has rediscovered his power stroke on occasion. Regardless, here we are in crunch time, and the Yankees’ best chance would come with Higashioka starting as many games as he can handle. Even as Sanchez added a walk and very loud lineout, proclaiming afterwards that he hoped to have found some consistency, we’ve seen too much to think this can go without valleys which mitigate the peaks.

The Yankees clearly disagree. As they try to return to their homeland of the postseason, we’ll see whether that decision pays off or backfires spectacularly. Their first step, if imperfect, went off Monday without compromising the mission.