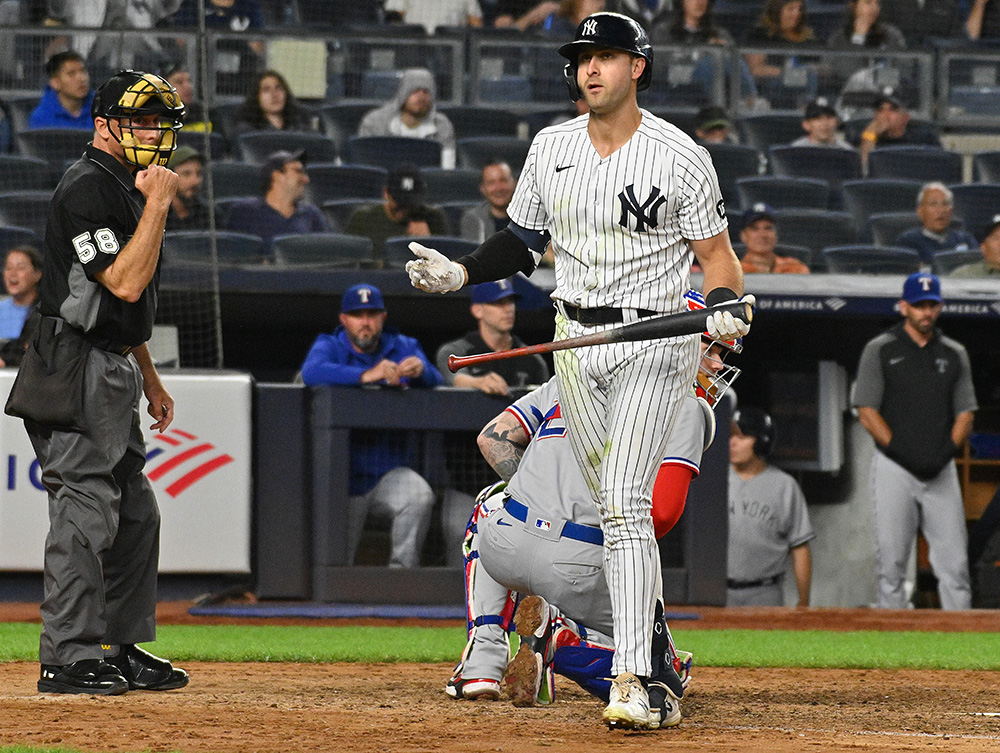 The Yankees bullpen hasn’t been the strength they’d expected it to be down the stretch.

However, in Monday’s 4-3 win over the Rangers, they got exactly what they needed — including encouraging outings from the inconsistent Chad Green and Aroldis Chapman.

Green hadn’t pitched since Wednesday and said the rest was good for him.

“My body’s felt pretty good all year,’’ Green said. “We all go through points where we struggle a little bit. I’ve felt like I’ve been in a good place. … I’ve felt pretty good the last two, three weeks. Just some stuff hasn’t gone my way.’’

And Chapman has been solid now in five straight outings since his last blowup against Toronto on Sept. 8. With a perfect ninth, he’s pitched 4 ²/₃ shutout innings with eight strikeouts in that five-game stretch.

“The bullpen was huge for us,’’ Cortes said.

Joey Gallo was back in the lineup after leaving Saturday’s game and sitting out Sunday with neck stiffness, the latest issue the streaky Gallo has dealt with since arriving in a trade from Texas.

Gallo said Monday that the adjustment process is ongoing.

“I’m still dealing with it,’’ Gallo said before the Yankees faced his former team in The Bronx. “I was so used to being a Texas Ranger. To this day, I’m still getting used to it.”

In his previous seven games — six of which were starts — before the injury, Gallo was in the best stretch of his brief Yankee tenure.

He was 8-for-22 with six homers, a walk and seven strikeouts.

Gallo went hitless with a walk and a strikeout on Monday, adding a diving catch in left.

Still, he hasn’t won over Yankee fans after getting off to a horrendous start in The Bronx.

With his old team in town, Gallo was asked about the differences in playing in the vastly different markets- and getting booed for the first time.

“I feel like I’m pretty good at handling it,’’ Gallo said. “I haven’t played that great, so I’ve been booed. You expect that to happen in New York.”

But it’s happened more than the Yankees or Gallo would have liked.

“You try to get used to it,’’ Gallo said. “This is a passionate fan base that wants you to succeed. If you play great, there’s no better place to be. It just takes a little bit of getting used to.”

Aaron Boone said Domingo German would join the Yankees “in the next day or two,” after pitching another rehab game Saturday. He left open the possibility of German coming off the IL Tuesday.

Jameson Taillon is set to pitch a rehab game on Wednesday as he tries to come back from a right ankle tendon injury.

“We’ll see where he is after that and where we can insert him,’’ Boone said of Taillon, who has been sidelined for nearly two weeks.

Gleyber Torres had two hits, a walk and an RBI. The struggling infielder also made a fine play on a grounder to his right to get Nick Solak to start the second inning. The Yankees have stuck with the infield of Torres at second, DJ LeMahieu at third and Gio Urshela at shortstop.

“The final two weeks, everything is up for grabs,’’ Boone said before the game. “We’re gonna run out there what gives us the best chance to win.”