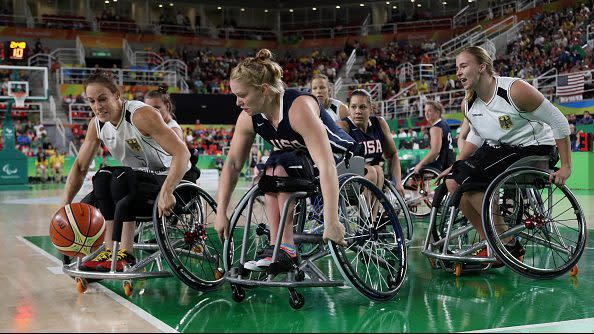 Wheelchair basketball was one of the sports contested at the inaugural Paralympic Games in 1960, though only by men. A women’s tournament was added to the Paralympic program eight years later and has been a staple ever since.

Here are some of the key storylines to watch in the women’s wheelchair basketball tournament at the Tokyo Paralympic Games.

A total of 10 women’s teams will compete in wheelchair basketball at the Tokyo Paralympics, divided into two groups:

At the end of the round robin portion of the tournament, the top four teams in each group will progress to the quarterfinal round.

ALSO FROM ON HER TURF: Women lead Team USA on day one in Tokyo

While most elements of the game are the same, there are a few differences between standing basketball and wheelchair basketball.

The most notable rule change? Wheelchair basketball doesn’t have a “double dribble” rule. Instead, players must pass or bounce the ball after every two pushes on their wheelchair.

ALSO FROM ON HER TURF: Alia Issa, first woman on Paralympic Refugee team, looks up to another immigrant: Giannis Antetokounmpo

Like every Paralympic sport, athletes in wheelchair basketball are classified. The classification process is intended to make sure that competition is defined by skill and athleticism, rather than an athlete’s degree of disability.

That said, only three members of the current U.S. roster competed in Rio five years ago. Here’s a look at the U.S. women’s team for Tokyo:

The youngest member of the team, 17-year-old Ixhelt Gonzalez, took full advantage of the one-year postponement of the Games. Before the delay was announced, Gonzalez was one of the final players cut from the U.S. roster last year. “I like to say that Covid-19 gave me a second chance,” she said.

A senior in high school, Gonzalez traveled to Tokyo with a “big packet of homework” as her classes at St. Francis de Sales in Chicago resumed earlier this month.

Natalie Schneider, a mother-of-three and the only four-time Paralympian on the U.S. roster, says the level of competition in women’s wheelchair basketball has “continually increased” throughout her career.

“I keep coming back because I love the game and I love the team,” the 38-year-old said after practice on Sunday. “This team is such a family and it makes me want to be here. It makes me want to give back to the program and lead them with my experience so that USA Basketball continues to be a strong presence.”

ALSO FROM ON HER TURF: Meet the only mother-daughter duo competing at the Tokyo Paralympics

The Netherlands will be aiming to win its first ever Paralympic gold in women’s wheelchair basketball after claiming back-to-back bronze medals in 2012 and 2016. Both times, it was Germany that knocked the Dutch out in the semifinal round of Paralympic competition.

In 2018, the Netherlands broke through to win the women’s world title. The victory established the team as a favorite heading into Tokyo.

The Dutch are led by Mariska Beijer, who is competing in her third Paralympics this summer. When she isn’t training with the national team, she plays on a mixed gender team in Germany.

Thompson, 26, made her Paralympic debut in 2012, but missed the 2016 Rio Games while pregnant with her son Zachary, who was born ahead of the quarterfinal round of that year’s Paralympic tournament.

“He’s seen Mummy play wheelchair basketball pretty much all of his life. He watches me on court and he cheers and he boos when I take my shots,” Thompson said. “He’s my main motivation for me to get a medal. I just want that moment to put it around his neck and tell him I love him.”

Great Britain won its first world medal in 2018, claiming silver after falling to the Netherlands in the final.

How to watch the Tokyo Paralympics

NBC will provide over 1,200 hours of Paralympic coverage. Here are some highlights:

Separate and unequal? These Paralympians want to compete alongside Olympians US women win second straight gold in sitting volleyball Women won more than 60% of US medals at the Tokyo Paralympics