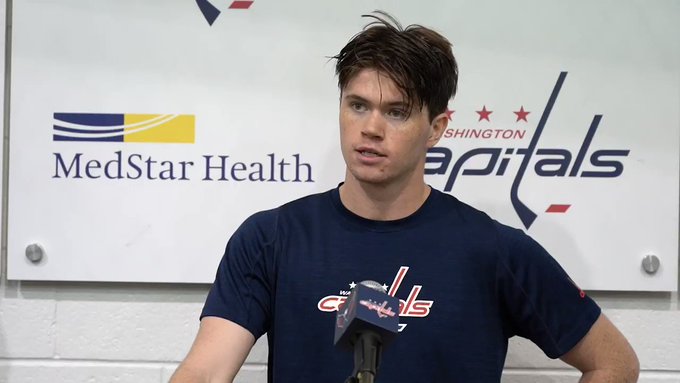 After three days of rookie camp this past weekend, the Washington Capitals have a lot to feel confident about as the team heads into main camp this coming Thursday. At the start of camp, I took a look at three key questions that were facing the Caps over the weekend, and for the most part, the prospects delivered. While the answers to most of the questions poised will take a whole season, if not multiple, to truly come to fruition, general manager Brian MacLellan and his staff should be pleased with the way the sessions played out.

Coming into camp after spending the summer training with Gary Roberts Performance and the likes of Steven Stamkos and Connor McDavid, Connor McMichael focused on increasing his strength through building muscle. Stating he is now up around 189 pounds, a six-pound increase from his recorded weight from last season, McMichael’s strength and growth impressed Hershey Bears head coach Scott Allen.

“The biggest thing for any pro is consistency and I think he learned a lot about that last year and it was really good for him because in a regular season he wouldn’t have been able to play in the American Hockey League, he had to go back to junior, so it would have been almost a wasted year for him,” Allen said about McMichael. “He had to step up his game playing against older, stronger, more mature players and he learned what it takes on almost a daily basis to be the best he can be and that’s going to be the challenge for him here.”

Allen continued that it will be up to McMichael to prove in main camp whether he is ready to make the jump to the NHL full-time this season. McMichael certainly made the case for himself to crack the Capitals roster, constantly winning puck battles and using his speed and strength to fight off checks. Although he will likely see extended time with the Bears in the AHL this season, should he continue impressing through main camp, there is a decent chance he makes the opening night roster.

With many fast-paced, high volumed shooting drills and small area games throughout the course of camp, both Hunter Shepard and Ryan Bednard rose to the challenge put before them. Led in drills throughout the weekend by Capitals fourth-year goaltending coach Scott Murray, the tandem will likely start the season together with the South Carolina Stingrays of the ECHL.

Bednard has the size advantage of the two netminders, measuring in at 6-foot-5 while Shepard is only 6-foot-1. However, once in action, both goalies displayed quick legs, fast hands, and lateral movement that earned audible gasps from the fans in the arena on multiple point-blank opportunities. At one point, Bednard had back-to-back stick saves in a 3-on-2 small area game that would have made any highlight reel had it been in-game.

In my opinion, the slight advantage goes to Shepard for his positioning and consistency throughout camp. Bednard is not far behind, however, as his size and puck playing ability will complement his game as it continues to develop.

First off, I would be remiss if I asked and answered questions about rookie camp only to mention Aliaksei Protas’ name and nothing more. The 6-foot-6, 210-pound center played to his size, utilizing his frame to protect the puck during battles and to create chances as he drove to the net. I really liked his game over the course of the weekend and his quick, heavy shot is reminiscent of Anthony Mantha. Protas was also the only player I noticed that interacted with the fans by tossing a kid a puck after one of the sessions.

However, the main focus of the third question in that article was aimed at the 2020 and 2021 draft classes. And with the way Vincent Iorio, Dru Krebs, and Hendrix Lapierre performed throughout camp, the Caps look to be restocked with talent ready to make their mark.

Starting with Lapierre, he was not only one of the most consistent players on the ice, he was also one of the most vocal. You could tell his confidence was sky-high throughout camp, even trying to pull off a lacrosse-style goal during the goalie drill portion on Sunday. In fact, the line of Protas, Kody Clark, and Lapierre started using line rush drills to try to set up highlight-reel goals. While that sort of thing might rub a coach the wrong way during a normal practice, that confidence will be imperative as Lapierre heads into main camp to prove he belongs in the NHL.

“I think I’m getting closer to [my NHL dream] every day, I mean I do everything in my power each and every day to be a better hockey player, whether it’s on-ice preparation or off-ice preparation,” Lapierre said following Day 2 of camp. “I definitely feel really good right now, lots of confidence. I think that’s a good thing, you know, the mental side of things and right now, I feel confident in my abilities and just in my general place.”

Iorio and Krebs, the only two selections from this year’s draft that skated in rookie camp, both showed flashes of the skills that got them drafted. The pair will likely report to their respective junior teams in the Western Hockey League this upcoming season, but after showing off their skating and puck-moving abilities—and the fact they were the last two off the ice after every session—the future of the Capitals blue line looks to be in solid hands.

Many of the other prospects performed well enough to potentially garner an invite to main camp, while a couple of others seemed to be in over their heads. With around 35 players already expected to report to training camp, it will be interesting to see how many from the weekend impressed enough to earn extra ice time in front of the Capitals coaching staff.

Born and raised in Michigan, Kyle Knopp started playing hockey when he was 3 years old. Knopp has played, coached, or worked at every level of ice hockey — including three seasons in the Ontario Hockey League and two seasons with the Detroit Red Wings where he was part of the Stanley Cup Championship team in 2008. He covers the Washington Capitals and Detroit Red Wings for The Hockey Writers and is the editor of THW’s Morning Skate newsletter. You can follow him on Twitter @THW_Knopp.