The Left Leans Into Champagne Socialism 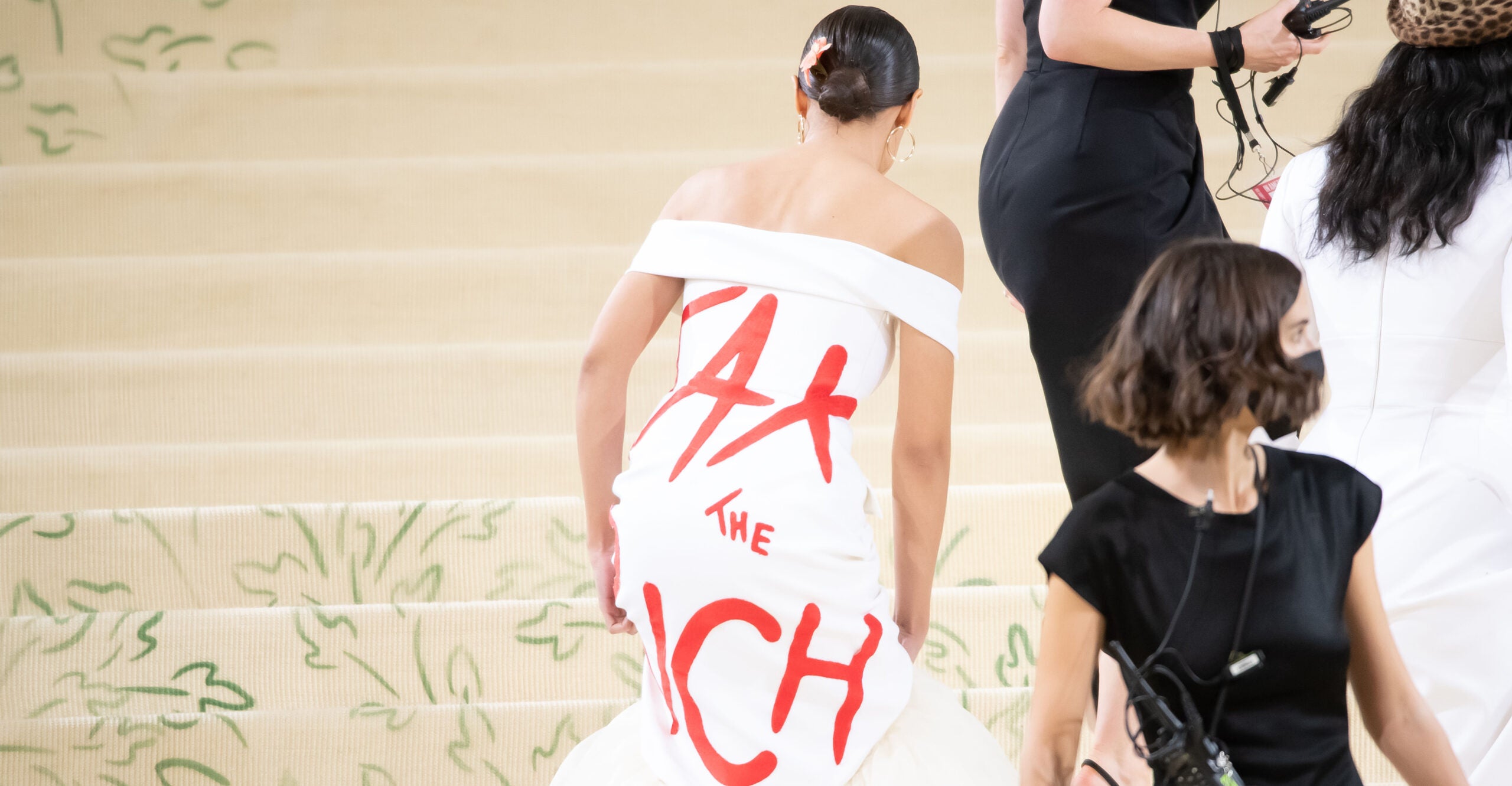 “Tax the rich” reads a dress worn by a socialist congresswoman at an exclusive New York City gala that typically costs $35,000 to get into.

The now infamous dress worn by Rep. Alexandria Ocasio-Cortez, D-N.Y., who appears not to understand the irony or really even the definition of irony, was made by a company deep in tax debt in three states (in part for not paying out workers-comp insurance to employees).

Being aligned with socialists in 2021 apparently means looking like the decadent elite in The Hunger Games, dodging taxes, and stiffing workers.

In response to criticism, Ocasio-Cortez said that politicians have to attend the event “due to our responsibilities in overseeing our city’s cultural institutions that serve the public.”

She added that the criticisms are just the latest example of how her body is “policed from all corners politically.”

We’re to believe that Ocasio-Cortez’s appearance at the Met Gala was just being done for you, the people. And by the way, anyone who criticizes this decision is a sexist!

As absurd as her comments may seem and as hypocritical it may look like on the surface, there is a certain kind of logic to it if you separate what the new “socialists” say they are for and what they are really about.

Confused as to why someone who presents as a “for-the-people” socialist demands all the opulent privileges of a Politburo member? Welcome to champagne socialism.

This perfectly illustrates the cultural and political trends of American society.

Left-wing, woke sloganeering is the social capital of the cultural elite. It’s the currency by which they maintain their status and shield themselves from criticism. “Tax the rich” is a perfectly acceptable and, in fact, an approved message, just as “protect unborn life” wouldn’t be.

John Gibson, the executive officer Tripwire Interactive, a video game studio, resigned after tweeting out support of a Texas law prohibiting the abortion of babies with a heartbeat.

He was literally denounced by the company as he left.

Solidarity to the cause is the only quality that now matters in our increasingly mediocre “meritocracy.”

Join the cause and you can do no wrong; go against it and you’ll be unpersoned.

By demonstrating their commitment to various left-wing causes—especially diversity, equity, and inclusion—no manner of hypocrisy, incompetence, or failure can derail this elite’s access to power.

Remember when Virginia Gov. Ralph Northam, a Democrat, basically endorsed infanticide and then admitted to wearing blackface—or maybe it was a Ku Klux Klan hood—in a college yearbook photo?

One would think that would have been a career-ender for the Democrat politician, but he got a pass after doubling down his commitment to wokeness and tearing down historical statues.

Racism is just fine as long as you join the crusade of anti-racism.

San Francisco Mayor London Breed has been praised widely by the left for being at the forefront of creating new, “equitable” American cities. How has she demonstrated that commitment?

Breed was caught dining at the exclusive Napa restaurant French Laundry—clearly a popular spot for California Democrat politicos—in November when she and so many other politicians were insisting that we all must socially distance and avoid gatherings.

At the time, she called the criticism “fair.”

A year later and we see what that fair criticism really meant to the San Francisco mayor.

She was once again caught at a large social gathering in a San Francisco nightclub, this time dancing and singing without a mask among a party of maskless people, violating her own city’s rules.

Breed’s initial excuse was that she was vaccinated, but San Francisco’s rules don’t make distinctions for mask-wearing between the vaccinated and unvaccinated.

She then followed up with excuse No. 2.

“I was feeling the spirit and I wasn’t thinking about a mask,” Breed said while laughing and smiling in an interview.

Taking the mask on and off to follow a ridiculous rule is tedious, you see.

This is basically the equivalent of “whatever, I’m the mayor, stop killing the vibe while I break my own dumb rules that you have to follow at the risk of a hefty fine.”

Another great victory for equity and science.

Will Breed face any consequences from this? Of course not. She’s committed to the revolution.

The lesson is that under our new cultural hierarchy, blatant hypocrisy and double standards from the elite should be expected.

You stay within those ranks and in the good graces of the regime by paying constant homage to its cultural tastes and making it clear that in this new world of tolerance and inclusion, those who disagree or differ are justly and ruthlessly excluded.

The only flaw in this system is it will crumble if the people truly turn against them. If the people decide that they’ve had enough of the hypocrisy, enough of the vapid sloganeering, and begin to demand competence and accountability from leaders, maybe there will be consequences to this nonsense.

Until then, expect more absurdities.

Have an opinion about this article? To sound off, please email [email protected] and we’ll consider publishing your edited remarks in our regular “We Hear You” feature. Remember to include the URL or headline of the article plus your name and town and/or state.

PrevPreviousSupreme Court Hear Major Abortion Case
NextWATCH: Joe Biden Has No Idea Where He Is or Who He’s Talking ToNext