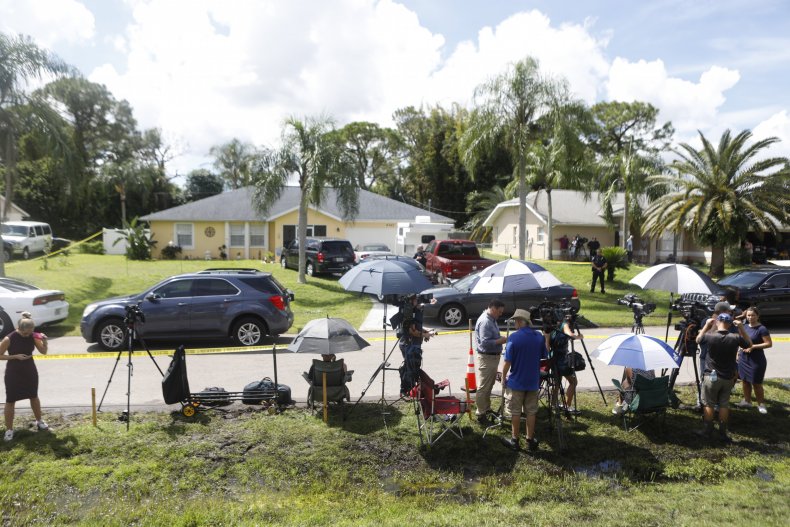 A collection of stones assembled to form what appears to be a makeshift memorial has been found in the same area where investigators found remains believed to be missing 22-year-old Gabby Petito.

About a dozen white stones arranged in a cross were spotted in the dirt next to a river in an area of the Bridger-Teton National Forest in Wyoming.

The site was spotted on Monday evening at the Spread Creek Dispersed Campsite, although it remains unclear when the cross was created or who placed it there.

“We have found what appears to be a memorial in the area where law enforcement searched for and eventually found the remains of who law enforcement believes to be Gabby Petito,” Fox13 reporter Sydney Glenn tweeted around 8 p.m. local time on Monday. “This is in the area of Spread Creek Dispersed Camping Area,” Glenn added.

On Sunday, the FBI Denver Division released a statement confirming they had found “human remains consistent with the description of Gabrielle ‘Gabby’ Petito.”

The following day, investigators left the search area as authorities promised “a full forensic identification” of the remains would ensue.

An autopsy is scheduled for Tuesday, in which the medical examiner will confirm the identity of the remains and investigate the cause of death.

Petito was first reported missing on September 11, more than two months after leaving for a cross-country road trip with her fiancé 23-year-old Brian Laundrie and 10 days after he returned home without her.

Laundrie, who is officially named as a person of interest in the case, is refusing to talk to police and has not been seen since September 13, according to reports.

As investigators work towards cracking the case, audio from a 911 call made to police in the days before Petito mysteriously disappeared has been released by the Grand County Sheriff’s Office.

In the call, an unidentified male caller is heard reporting a “domestic dispute” and tells the dispatcher that “the gentleman was slapping the girl” and hitting her near a store in Moab, Utah, around 4:30 p.m. on the afternoon of August 12.

The caller described seeing a couple arguing over a phone and a white Ford Transit van with Florida license plates.

Officers from the Moab City Police Department responded to the incident later that day, identifying the couple as Laundrie and Petito.

A responding officer later pulled the van over and said that when he approached, Petito was “crying uncontrollably” in the passenger seat.

“The driver of the van, a male, had some sort of argument with the female, Gabbie [sic],” a responding Moab City Police officer wrote in a police report.

However, Petito and Laundrie told police that “they are in love and engaged to be married and desperately didn’t wish to see anyone charged with a crime,” the police report said.

The Moab City Police Department advised the couple to separate for the night and said that they didn’t see a reason to file charges.

Laundrie returned back to the couple’s shared home in North Port, Florida, on September 1 but has since reportedly gone missing.

Attorneys for the Petito family released a statement on Friday saying Laundrie was not missing, but “hiding.”

PrevPreviousWill China bail out Evergrande?
NextCelebrating International Day of Peace with Shining a Light on HopeNext