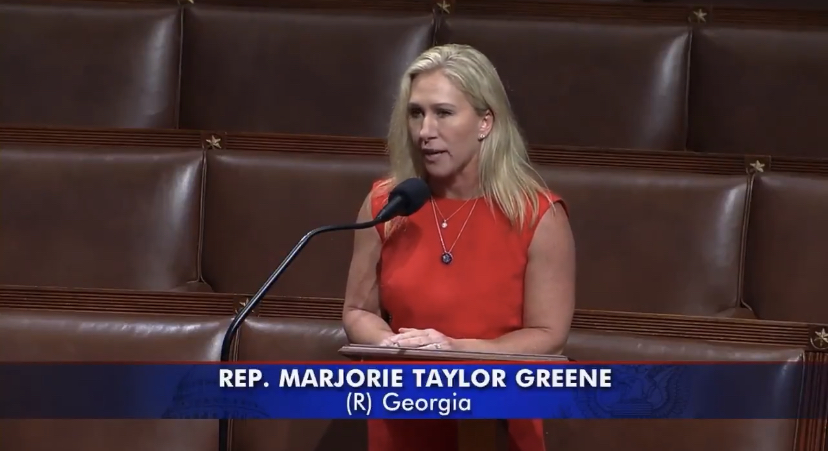 Freshman Congresswoman Marjorie Taylor Greene, R-Ga., introduced additional Articles of Impeachment against Joe Biden on Monday in retaliation to a number of his unacceptable failures as president, which she says amount to treason.

Speaking on the House floor in a video posted to Twitter, Greene explained why she supports impeaching Biden.

“I’ve introduced Articles of Impeachment on President Joe Biden. The reason why I have done so, is for his disgraceful actions having to do with Afghanistan. Abandoning Americans, arming a terrorist nation, the Taliban, which is treason, and giving aid and comfort to our enemies,” said Greene.

“But I’ve also introduced Articles of Impeachment for the national security crisis created at our southern border, which today is actually being invaded,” she announced.

Before finishing up her time on the floor, the Georgia congresswoman gave her final and most damning reason for her efforts to impeach Biden, calling Biden’s stance on abortion, “evil.”

“Heading into this week, perhaps, the most evil and disgusting thing that is going to happen in this 117th Congress is the bill that’s going to be introduced that makes it a federal law to allow abortion up until the day of birth,” Greene said.

The representative then brought up God’s reaction to such laws and called on congress to reject a bill that would allow late-term abortion.

“This wall says, ‘In God We Trust,’ and if that is the case, then this congress will reject this evil bill and protect the innocent unborn. If this nation becomes a nation where we have such a federal law that can kill a baby up until the day of birth, then God will no longer provide protection and His grace over America.”

Biden has faced unrelenting backlash in recent weeks from both sides of the political aisle who have criticized his mismanagement of the withdrawal of U.S. troops from Afghanistan. Under his direction, American citizens and allies were left without an exit strategy while having to face the wrath of the Taliban. His lack of strategic planning also resulted in the loss of life for 13 U.S. service members.

Currently, Biden is facing enormous pressure from Republicans to close the southern border, which is being flooded with Haitian immigrants looking for asylum. According to USA Today, thousands of Haitian migrants have freely crossed the Rio Grande from Ciudad Acuña, Mexico, into Del Rio, Texas, in the last three weeks. It is estimated that one million undocumented migrants, mostly from Central America, crossed the southern border in just the first six months of 2021.

When it comes to the reality of Biden actually facing impeachment, the chance is slim. Senate Minority Leader Mitch McConnell, R-Ky., said on Sept. 1, that “the president is not going to be removed from office. It’s a Democratic House, a narrowly Democratic Senate, that’s not going to happen.”

PrevPreviousJohn Ivison: Trudeau shall reap the whirlwind
NextThe Jihad Plot in Pittsburgh You Heard Nothing About – PJ MediaNext