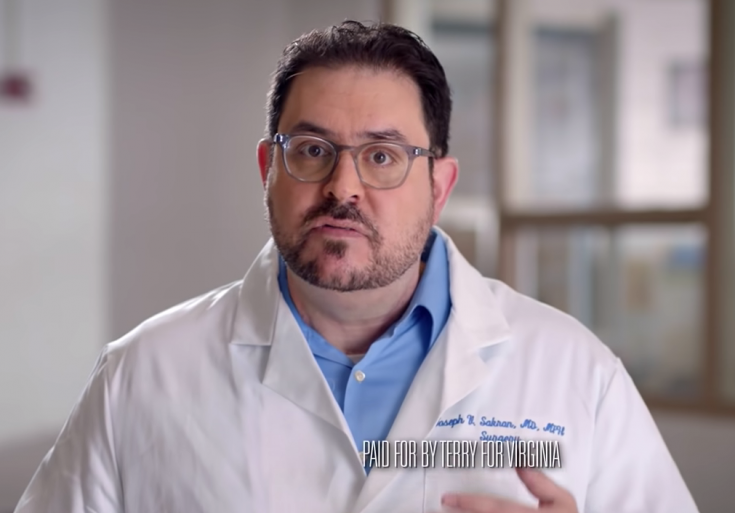 Virginia Democratic gubernatorial nominee Terry McAuliffe employed a left-wing doctor who questioned the efficacy of the vaccine during the Trump presidency to portray his GOP opponent as anti-science.

In an ad released Friday, McAuliffe trotted out trauma surgeon Joseph Sakran to argue Youngkin “won’t listen to doctors and scientists.” While the ad presents Sakran as an unbiased expert who merely cites “the science,” Sakran himself sowed doubt about the vaccine during its development and has a long history as a liberal activist and donor.

Sakran in May 2020 questioned a Moderna announcement that touted “promising vaccine results,” suggesting that the company only did so to manipulate its stock price.

Prominent liberals echoed Sakran’s rhetoric at the time. MSNBC host Joy Reid, for example, asked in September if “anyone at all” will “ever fully trust the CDC again” as “Trumpist nonsense has infected everything.”

“And who on God’s earth would trust a vaccine approved by the FDA?” Reid added. She has since claimed “anybody rational was hesitant” to take the vaccine because “Donald Trump was out there controlling the CDC and controlling the FDA and manipulating them and making them put out falsehoods.” Reid now regularly criticizes those who express vaccine hesitancy.

Sakran, meanwhile, called the vaccine “promising” just weeks after he warned that Trump could use politics to compromise its approval process—and just days after Biden won the November election. In December, he praised the Food and Drug Administration for recommending authorization of the Pfizer vaccine and declared himself “ready to get vaccinated.”

Sakran told the Washington Free Beacon he has “always been clear that vaccines work and ha[s] always encouraged their use” but declined to answer questions about his vaccine rhetoric during the Trump presidency. McAuliffe did not return a request for comment.

In his McAuliffe campaign ad, Sakran also made questionable claims to criticize Youngkin’s positions on coronavirus-related measures. Sakran, for example, said Youngkin “is against requiring masks in schools, even though the science has made clear that’s how we prevent outbreaks in schools.”

That science, however, is far from clear. Many American allies in Europe have exempted children from wearing masks in schools, and the World Health Organization advises against requiring masks for children ages 5 and under.

“Scientists have an obligation to strive for honesty,” hematologist and oncologist Vinay Prasad wrote in September. “And on the question of whether kids should wear masks in schools—particularly preschools and elementary schools—here is what I conclude: The potential educational harms of mandatory-masking policies are much more firmly established, at least at this point, than their possible benefits in stopping the spread of COVID-19 in schools.”

McAuliffe’s embrace of Sakran could also undermine the Democrat’s position as a supporter of Israel. Sakran, a self-identified “Palestinian American,” has referred to Israel as an “apartheid” state and condemned former president Donald Trump’s “reckless” decision to recognize Jerusalem as the capital of Israel. As governor, McAuliffe notably denounced the Boycott, Divestment, and Sanctions movement but has since welcomed an endorsement from an activist group that staunchly defends the anti-Israel campaign. Sakran did not respond to a request for comment about his past Israel rhetoric.

Sakran has long supported liberal causes and politicians. He created “Doctors for Hillary” in 2016 and gave nearly $7,000 to support failed presidential candidate Hillary Clinton’s campaign. He went on to launch gun control advocacy groups that caught the attention of Democratic officials—Sakran attended the 2019 State of the Union address with Rep. Mike Thompson (D., Calif.). In addition to his Clinton contributions, Sakran has donated nearly $9,000 to Democrats since 2016, including a $2,800 offering to President Joe Biden’s 2020 campaign.

With Election Day quickly approaching, McAuliffe leads Youngkin by just 3 points, according to a September Washington Post poll. The pair will square off at the polls on Nov. 2.