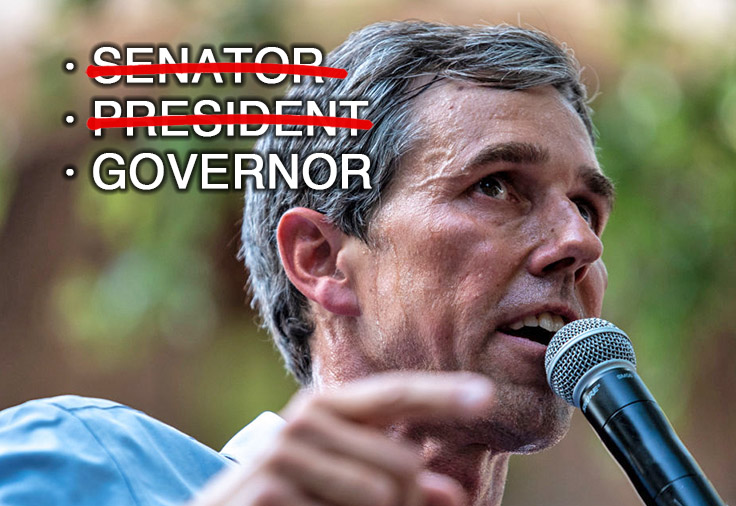 A failed gubernatorial campaign would make Beto one of the biggest losers in U.S. political history, just behind Hillary Clinton

“I’m just born to be in it,” failed Senate candidate Robert Francis “Beto” O’Rourke told Vanity Fair before he announced his failed campaign for president in 2019. He dropped out a few months later, after a series of Democratic primary polls showed him getting blown out by alternative options such as “None” and “Not Sure.”

The news blog Axios reports that Beto continues to believe in his destiny and will attempt a rare trifecta of political failure by running a losing campaign for governor of Texas in 2022. An official announcement is expected later this year, followed by a concession speech shortly after polls close in November of next year.

Because Beto is running in Texas against a reviled Republican—Gov. Greg Abbott—he can count on the media to provide the same glowing coverage that accompanied his failed attempt to unseat Sen. Ted Cruz (R., Texas) in 2018, when he raised almost $80 million that might otherwise have gone to candidates who had a realistic shot at winning.

Beto the Senate candidate was beloved by celebs and was constantly being compared to Barack Obama and John F. Kennedy. By contrast, the media coverage of Beto’s failed presidential campaign—when he was running against other Democrats—was amusingly ruthless in its criticism of the candidate. Beto was widely dismissed as a “privileged” white dude with a “long history of failing upward” and no legitimate rationale for running apart from his boundless ego.

It will be similarly amusing to watch the media change their tune once again and pretend that Beto has a chance to win in Texas, when all available evidence suggests otherwise. During his failed presidential campaign, for example, Beto tried his best to achieve a statistically significant level of support by embracing a number of extreme left-wing positions that will terrify a lot of Texas voters.

Launching a statewide campaign in Texas is an especially bold move for a candidate who made gun confiscation a central issue in the Democratic primary. Beto’s campaign even sold shirts that featured one of his most memorable debate lines: “Hell yes, we’re going to take your AR-15.”

In a subsequent interview with Morning Joe, Beto said he would send law enforcement officials to seize guns from Texas ranchers and other citizens who refused to relinquish them. Even Democratic voters seemed put off by his obsession with taking away people’s guns. Sen. Joe Manchin (D., W. Va.), meanwhile, suggested Beto’s extreme position on guns was “very harmful” to the Democratic Party.

As a candidate for president, Beto also proposed a $5 trillion climate change bill modeled after the controversial “Green New Deal,” cosponsored by socialist Rep. Alexandria Ocasio-Cortez (D., N.Y.). Even House Speaker Nancy Pelosi (D., Calif.) thought the legislation was a bit too extreme, so it’s safe to assume that the median Texas voter won’t be eager to embrace a similar proposal.

Beto, who has consistently struggled to win over minority voters, will face an uphill battle in 2022 after the Republican Party experienced a surge of support from Hispanic voters in Texas during the 2020 election, especially among communities near the border with Mexico. It’s also a midterm election year, which typically does not bode well for the party in power in Washington, D.C.

A recent poll found Beto trailing Abbott by 5 points—37 percent to 42 percent—in a hypothetical matchup, which is slightly larger than Beto’s margin of defeat against Cruz, one of the least likable politicians in the country, in 2018.

A failed gubernatorial campaign would make Beto one of the biggest losers in U.S. political history, just behind Hillary Clinton.