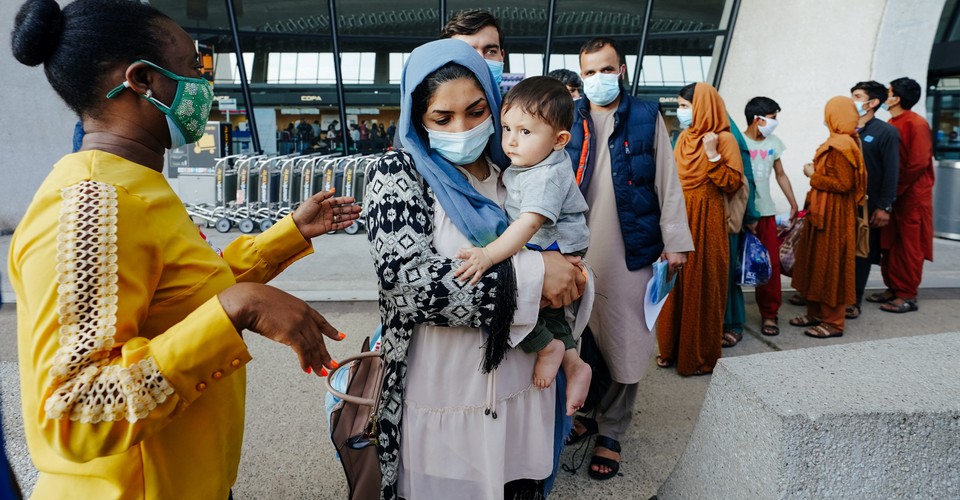 The very first United Airlines evacuation flight from Ramstein Air Base, in Germany, on Sunday had 300 passengers on board, and those passengers had many questions. Some wondered where the flight was headed and how long the trip would be. Others asked crew members where their luggage was, whether it had made it out of Hamid Karzai International Airport, and whether it would catch up to them in America. Many people asked about the Wi-Fi; it wasn’t working, so they couldn’t tell their family members that they were alive. A few asked for medical attention: One person had sliced open his foot running barefoot toward the airport in Kabul; another person had broken a leg in the crush of the crowd. Children begged flight attendants for bread and candy.

Jillian Johnson, a 35-year-old crew member, tried her best to answer all of the questions. Through an interpreter, she told the evacuees from Afghanistan that they were landing at Dulles International Airport, in Virginia; that it would be a nine-hour flight. She didn’t know anything about their luggage, but she could help them sign into the Wi-Fi. She tried to make people comfortable; she handed out chocolate-covered cookies to the kids and played with them while their parents slept. She practiced the few Dari words she’d learned before the flight: Salaam. Bale. Ne. She listened to their stories of the violence at the airport, the gunfire and the bodies.

Johnson’s passengers had fled Afghanistan just in time: Four days later, a terrorist group set off a bomb at the Kabul airport, killing at least 170 Afghan civilians and 13 U.S. service members, and stalling America’s evacuation efforts. Thousands more people are still attempting to reach the airport, risking everything to escape, but the United States’ deadline for withdrawal is fast approaching. When that first United flight landed at Dulles, many of the passengers applauded. A little girl presented Johnson with a pair of earrings—tiny purple roses—as a thank-you gift. The child’s family was safe, but they still had a long way to go.

Read: Biden’s betrayal of Afghans will live in infamy

On Wednesday afternoon—three days after the United passengers had been processed and dispersed to military bases throughout the United States—I went to Dulles airport to speak to other evacuees as they emerged from a security checkpoint near the Saudia ticketing desk.

They’d already spent so much time waiting. Some of them had waited for days in the Kabul airport, days more in Qatar, hours on a hot tarmac, and hours more on the flight from Ramstein or some other air base. Now here they were, waiting again, in a row of folding chairs behind a navy-blue privacy curtain. They waited on COVID-19 test results, and after that, they waited for a man in an Army T-shirt to escort them onto a bus, which would take them to a nearby facility, where they would wait a while longer before traveling elsewhere to begin the resettlement process.

While I watched, I thought that if I had to spend so much time waiting in airports and checkpoints, I’d be screaming at agents or crying with impatience. But the Afghan evacuees I met were calm. They filed out of the security checkpoint quietly, a few groups every 20 minutes: men in beige waistcoats, veiled women with curly-haired babies, toddlers clutching juice boxes. Each person wore a stripe of blue electrical tape on their shoulder with a four-digit identification number.

As people came out from behind the curtain, I asked them to talk with me—to wait for just a while longer—and most of them did, though they generally declined to share their last name, fearing Taliban retribution. A 35-year-old man with sunken eyes named Mo smoked a cigarette while he waited to board the bus. He’d worked as a translator for the U.S. military for the past 15 years. Afraid of being targeted by the Taliban, he’d fled the country, leaving his wife and four children back in Kunar province. At some point, he hopes to bring his family over too. He didn’t care where in America he ended up, he said: “I’m happy anywhere.”

A few minutes later, a U.S. citizen named Noorullah came out from behind the curtain. He had been visiting his mother and extended family in Kabul when the Taliban entered the city. He’d previously worked for the Afghan government, as had his father-in-law, who had fled to the Afghan countryside. So when the Taliban began going door-to-door in his neighborhood, searching apartments and interrogating residents, he rushed to the Kabul airport. Noorullah waited in the crowd outside the airport for three days before he finally made it in. He watched members of the Taliban shoot people scaling the airport walls, and he saw two different women give birth on the street. Now Noorullah was heading back through security to board another flight home to California, where his wife and daughters live.

While I talked with people, volunteers with World Central Kitchen wheeled carts piled with boxes of Chex Mix and raisins and bananas into the private screening area. Others hauled in plastic containers full of hot food. Through gaps in the curtain, I could see nurses in face shields and scrubs administering tests and barking orders to their colleagues. Near me, family members of evacuees milled around while they waited to take their loved ones home. One Virginia man had been waiting for 13 hours to pick up his brother-in-law; another worked on a Rubik’s Cube while he hoped for updates from his wife.

I stopped a small group of women as they walked toward the buses out front. The only one who spoke English, an 18-year-old woman named Khatera, was traveling with her younger sister and her elderly mother, who clung tightly to her arm. Khatera’s other sister, who lives in California, had managed to get them the right documentation to come to America. The journey so far had been arduous, but upon landing at Dulles, she and her family finally felt a measure of relief. “We are safe, and we can learn and we can go to school,” she said. “Now our solution is good.” I asked Khatera if she knew where the bus outside would take them—maybe the Dulles Expo Center, where I’d read that other refugees were being housed? “Miss, I don’t know from here where we go,” she replied.

I watched Khatera and her family board the bus and choose their seats. In the coming days, they will probably travel to a military base in New Jersey or Wisconsin for processing. They might be able to request the state where they will be resettled; maybe they’ll go to California to be near Khatera’s sister. The refugees might receive a small stipend from the U.S. government, but after that, they’ll be on their own. Outside the bus, the driver had opened up the lower luggage compartment for passengers to drop off their bags. The bus had filled with people, but the luggage compartment was still empty.