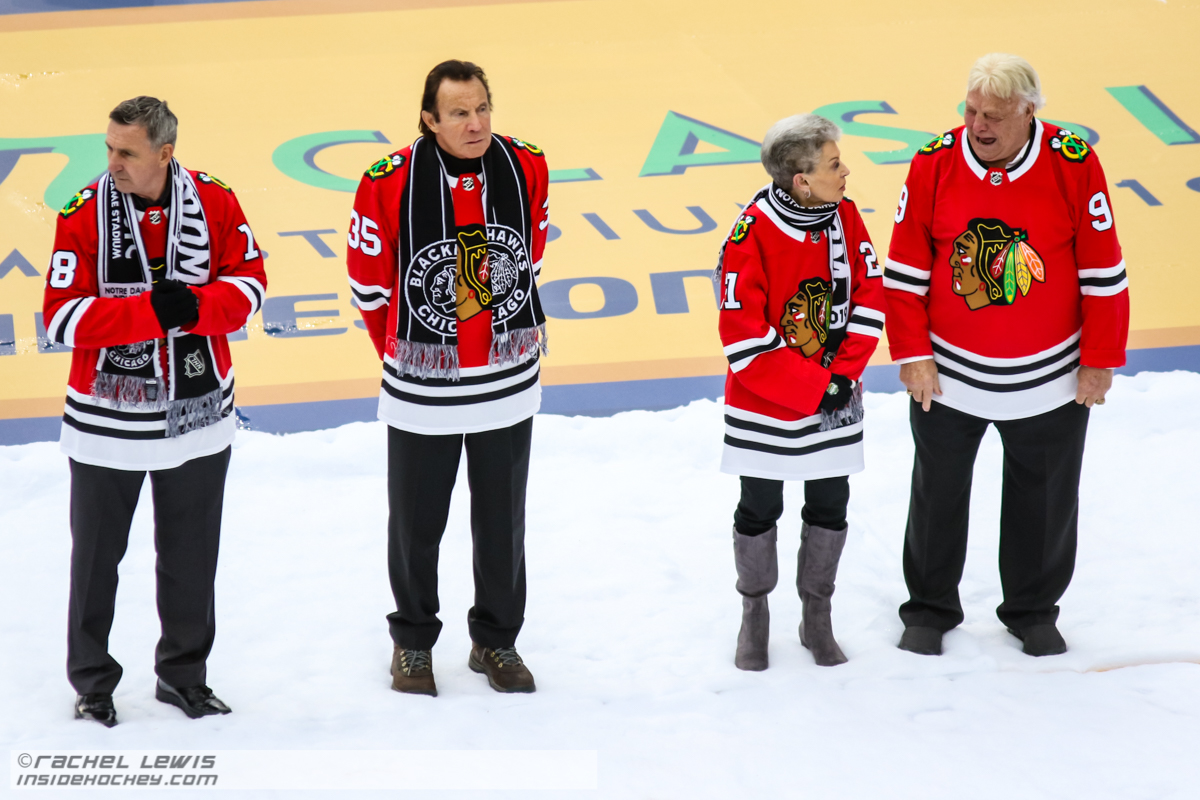 “Those guys we’ve been mourning lately were people whom I remember. Tony Esposito was someone I worshipped.”

That’s what I said to my friend Manny yesterday in response to his condolences on the occasion of Tony O’s passing at age 78. The people I was referencing were baseball players from the 1970s who seem to have been dying with regularity of late, men like Hank Aaron, Bob Gibson, Lou Brock, and Tom Seaver. Each has made me sad in his loss. Tony Esposito’s death is of a magnitude greater, because losing him means seeing a part of my childhood disappear.

I was about ten when my mother faked a Tony Esposito autograph onto the shaft of a hockey stick I used on my Brossard neighborhood rink. Few of my friends believed the signature was authentic, but the fact that I chose him above local hero Ken Dryden tells you something.

When, in a dream moment in 2017 I got to interview Tony O on the night he was named one of the best 100 NHL players ever, I started with that story. He laughed, and after answering my questions (see below), he said, “Say hi to your mom for me!”

I wasn’t the only boy in my elementary school to revere Tony Esposito in the early days of the “Me Decade,” though we had little regard for his Chicago team, being Montrealers madly in love with Les Canadiens.

What none of us were old enough to remember is that he actually won the Stanley Cup, his only one, with our Montreal Canadiens, in 1969. He shared playoff duty  with Gump Worsley.

But by 1971, when we woke up to the world, and the NHL, we knew Esposito only as a Black Hawk, and though Ken Dryden was probably our favorite player, and we had guys like Gerry Cheevers on our radar, Tony Esposito, the only player we could imagine wearing #35, was a demi-god.

Maybe it was the stance—the low look-through posture that he used in an age of mostly stand-up netminders. Maybe it was the mask, which we replicated in drawings we made in notebooks that were supposed to be reserved for math homework. Maybe it was the lefty stance, which set him apart in a world of goalies who held the stick in their right hand.

Esposito discussed the butterfly style with me. “I played much like they do today. I think when I first saw [the butterfly style] Glenn Hall played it somewhat, and he combined the old style, the stand-up style with the butterfly. Me, I remember the press saying you can’t play in the NHL with the go-down style, and sometimes you flopped around or whatever you’d got to do to stop the puck. After a few years, they accepted my style, and a lot of goalies today are playing like I played.”

The series could easily have gone the other way, too. That final game, 3-2 to clinch for Montreal, would have turned had Jim Pappin put a puck by the outstretched catching glove of a prone Ken Dryden late in the going. Nothing Esposito could do would affect that, of course. He would stop all the shots he needed to—he couldn’t score the goals.

Esposito explained to me what he remembered of that series. “You go to seven games, and you lose 3-2 or whatever it was, that stuff happens.” Remembering the score of Game 7, to me, is telling.

I also remember him for how he showed up Dryden in the 1972 Summit Series versus the Russians. Dryden, starting with the first game loss, 7-3 (naturally the fault of the team, as well, because they couldn’t keep up with the Russians after an early Canadian surge), showed that he couldn’t adjust to the quick passing of the Soviets. Esposito, who played in games 2, 3, 5, and 7, was much better.

I’ve written it since, but here it is again: Had Tony O started in Game 5 of that series, and kept up his stellar play, would there have even been a need for the last-minute heroics of Paul Henderson on down the line in Game 8?

Funny to think about—Tony Esposito’s greatest moment in winning that game might have deprived Canada of its greatest moment—34 seconds left in Game Eight. “The Goal.” Because a Game 5 win would have sent Team Canada to Moscow with a 2-1-1 record and the sense that they had figured out how to play with, and found the legs to keep up with, the Russians.

Yesterday, all of these moments slipped a bit more irretrievably into the past with Esposito’s death. His records won’t die, though.

He won the Calder Trophy as Rookie of the Year in 1970. He won the Vezina three times. He set a record that may never be broken when he recorded 15 shutouts in his rookie year.

Esposito’s lifetime record in the regular season was 886 games played with 423 wins, 306 losses, and 152 ties. He had 76 shutouts. His wins total puts him tenth all-time, a number that’s not going to be eclipsed for a while—the next active player in wins is Carey Price, with 360.

His All-Star appearances were six, and five times he was named to the season-ending NHL All-Star team.

How was he that good? Innovation. He was constantly modifying his equipment to gain advantage. I asked about coaching, and he explained that it was a do-it-yourself situation back in those days. “No, we [goalies] were on our own, but I picked things up. I watched these guys, the other guys, the older guys.” Explaining his low stance once more, he said, “I just thought that when a guy’s shooting a screen shot and you’re standing there like a board, and if it misses you, it’s in the net, I thought if you went down and spread out, it’s coming through the legs, and you can make the save.” He made a lot of them.

At the end of my interview with the Great Tony Esposito, I said thank you, but his “Thank You” was bigger.

Now it’s my turn once more:

Thanks, Tony. You’ll never be forgotten.