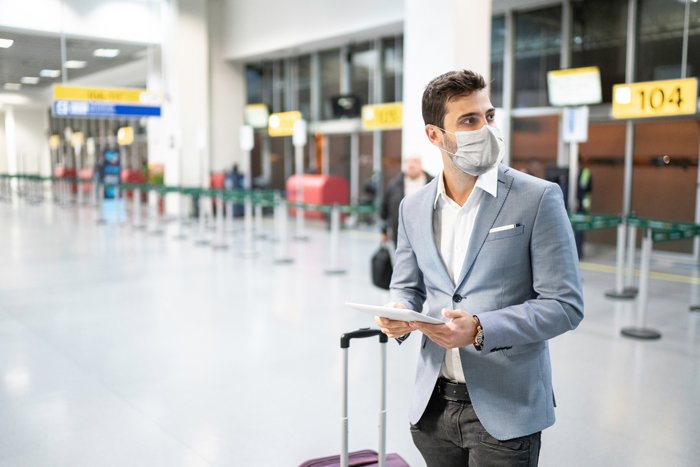 At present, entry into the United States is banned for almost anyone not an American citizen or permanent resident who has stepped foot in the U.K., Ireland, the EU’s Schengen area, Brazil, Iran, China, South Africa, or India in the previous 14 days. Aside from all the destructive consequences for families, that means even non‐​immigrant visa holders living and working legally in the United States are offered no certainty of return if they leave to visit these homelands.

Even before Biden’s vaccine mandate, this was a patently nonsensical policy. Americans, who of course are just as likely to be carrying the virus, are allowed to travel freely to these countries, irrespective of their vaccination status. The president’s own granddaughter, for example, enjoyed a vacation in sunny Greece this summer—a country ensnared by the travel ban on EU countries.

The country blacklist is not updated to reflect the ebbs and flows of the virus. Poland, for example, today has just 10.2 new daily cases per million people. In Costa Rica, the equivalent figure is 484. In Israel, it is 797—a level almost seven times higher than for the EU as a whole. But Costa Ricans and Israelis can come and go from the United States as they please, while Poles and other EU nationals continue to be barred from entering.

Now that Biden is putting policy flesh on the bones of his claim that we are in a “pandemic of the unvaccinated,” basing travel restrictions on geography instead of vaccination status defies logic. An administration blocking unvaccinated Americans from their offices surely cannot just allow unvaccinated foreigners to flit in from COVID-19 hotspots; a government insisting vaccination proof is the key to a normal work life surely can’t close the border to all vaccinated foreigners, many of whom live and work here.

Even if Biden thought a personal vaccination requirement for those entering the U.S. unworkable, the countries blacklisted by America must surely now be revised. Many of them have considerably higher vaccination take‐​up than the U.S.: 64 percent of the U.K.’s population is fully vaccinated, for example, as is 60 percent of the EU’s. The U.S. figure is 53 percent. How can a president preaching the vaccine mantra maintain these restrictions while preserving an open door to low‐​vaccination countries such as Jamaica (5 percent) or Mexico (28 percent)?

Until now, for whatever reason, no country entering the blacklist has ever been removed. Even as COVID-19 cases have waxed and waned, high‐​efficacy vaccines have been rolled out, and other countries have changed their own border policies regularly, U.S. measures have been inert. Regardless of the logic behind the administration’s stubbornness, the vaccine shift at home provides natural political cover for a change of approach abroad.

After last Thursday’s announcement, Americans working for companies with more than 100 people would face more stringent public health screening than foreigners entering the U.S. from the Caribbean, Latin America, or the Middle East. That is surely not sustainable.

The repercussions of the administration’s travel bans include retaliatory quarantine requirements for Americans entering many European countries; angst for international families separated through an entry barrier to their jobs and loved ones; deterred investment in the U.S. economy; additional struggles for the beaten tourism industry; and the heartbreaking decision by many to abandon their dreams of a life here. The administration should seize the opportunity to repair the harm done by these stringent measures.

In one sense, whether the president uses his recent COVID-19 pivot to address the travel ban is an acid test of the sincerity behind the stated rationale for his aggressive actions last week.

If the administration is interested in nothing more than signaling “toughness,” it might keep the illogical travel bans in place. The co‐​existence of these restrictions and a vaccine mandate would suggest a president not so much interested in adapting to an ever‐​evolving threat as focused on buck‐​passing and politically convenient public shaming.

If, however, the Biden administration is serious about accelerating vaccination rates and realizes some measures have outlived their usefulness, it would surely alter travel policy accordingly. Introducing a vaccine mandate while revising border measures to reflect vaccinations abroad would suggest, at least, that Biden has a coherent, if heavy‐​handed, plan for the next phase of the pandemic.

At stake in this decision is not just the effects of a policy that has now become an unjustifiable impediment to normal life for millions of people, but whether Biden actually means what he says about COVID-19.